For months it looked like Manchester United would need, at the very least, three points at the Etihad to stand any chance of overtaking Manchester City in the title race. For months, United were being commended for being able to stay within touching distance despite injuries that had disrupted Ferguson’s season plans and forced him to scrap all pre-season tactical preparation and build his team shape from scratch.

But if you’ve followed United in the past two decades of winning league titles, you know that it’s never over until you get to May. Newcastle, Arsenal and Liverpool have all conceded healthy leads to United, and United themselves have lost titles to Leeds United and Arsenal after leading from the front.

Roberto Mancini knew this, he knew the strengths and weaknesses of his squad and at the start of the season it was clear that he was unhappy with the depth in his squad, a situation made worse with Balotelli’s eccentricities and Tevez taking a vacation in Argentina mid-season. And now, two points behind United and having played a game more, City are left hoping that United falter again this season and that the title race lasts at least till the end-April Manchester derby.

Except this is a bit of wishful thinking. United have already had their blip – a couple of blips actually, the first one in the league when they lost Cleverley and Anderson to injuries, throwing months of pre-season work on tactics, shape and balance into the trash. This is around the time City overtook United in the league and had no reason to look behind their shoulders. United’s other blip was around their Champions League performances where defensive injuries piled upon the midfield crisis and left United with too much to do.

So here we are, start of April, United have ridden through their blips and are in pole 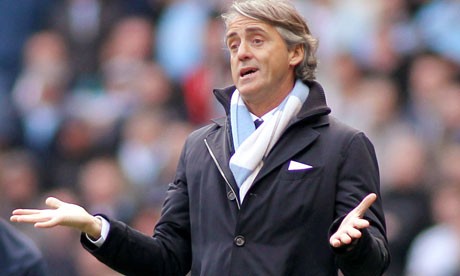 position going to Ewood Park to face Blackburn – a team they really should have beaten in the reverse fixture and a match that Mancini hopes United will ‘draw’. There’s no guarantee that United will win, of course, but if you had to choose between United and City, between Ferguson leading a fresher, united squad to an away win at Blackburn (a routine end-of-season crunch game his players have negotiated several times in the last five seasons en route to four league titles) and Mancini leading a tired, slightly disrupted squad to an away win at Arsenal, who would you pick?

And that Arsenal game is key for City, as much as the Etihad game or the Newcastle game in the first week of May. Regardless of what United can or cannot do against Blackburn, City need to win their remaining games to be able to stay within touching distance. United went on a brilliant run recently against the top teams, only dropping points to Chelsea and that too after needing a massive comeback in the second half. City need to display that same poise and fighting spirit now, to go to the Emirates and defeat Arsenal, and then hold on tight against West Brom (home), Wolves and Norwich (both away) to ensure that they have a chance of upsetting United at Etihad. 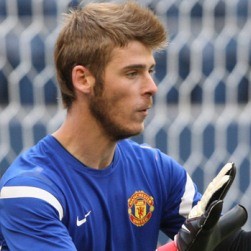 United can, and should, get three points against Blackburn, opening up the gap to five points. A win for Arsenal, or a draw will give United a 7-8 points lead if they beat QPR at home that weekend (again, more likely than City beating Arsenal away.

Six years ago, this blog was started when United lost to Chelsea in April, going from 6 points behind to 9 points behind. A win would have given them hope and cut the game to three points but United weren’t good enough that season, despite being better than everyone else.

This year, the crunch game comes down to the Emirates. A win, and City can live to fight another day. Anything else, and they’ll be hoping that miracles (and referees) go in their favor. Because if there’s one thing you can take away from Ferguson’s reign under United, it’s that this man knows how to win league titles. And with the 20th in sight (13th for Ferguson and an astonishing 5th in 6 years for United), there will be no dissension, no letting up from United.

An Arsenal win against City will deliver the title on a plate to United, with 6 games to play.