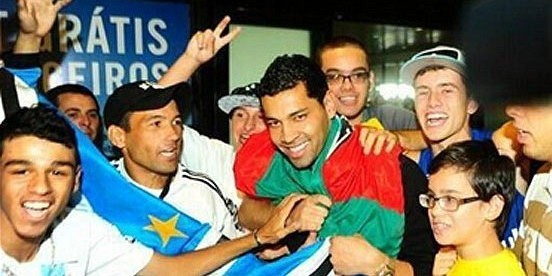 Arsenal defender Andre Santos has joined Brasileirao outfit Grêmio on loan until the end of the season after failing to cement his first team place this season.

The 29-year-old joined the London club from Fenerbahce for £6.8 million in August 2011 and has appeared 36 times for the Gunners during which he has scored four goals. One of those goals came in Arsenal’s 3-2 victory over West Brom on the final day of last season which helped secure Champions League football.

However, it is his defensive ability or lack thereof that has come in question time and again. Many expected Arsene Wenger to keep him till the summer as Kieran Gibbs was ruled out for two months with a thigh injury, but the Frenchman decided otherwise.

Several players from Brazil have played for Arsenal during Wenger’s tenure and many of them had a successful career. Here, we take a look at all the Brazilian players who have played for the North London club and how their career has panned out after leaving Arsenal.

After having troubles with passport faux-pas, Eduardo who was supposed to join the Gunners in 2000, was signed a year later for a reported fee of £6 million.

His early days at Arsenal were plagued with injury but aided the club to great heights in the next couple of seasons. In 2003-04, he made his 100th appearance for them but it became increasingly clear that he would leave the club once his contract expires.

He joined Valencia in 2005 penning a five-year-deal at the La Liga club. The club itself was going through their darkest phase following the departure of Rafael Benitez, and Edu found his chances limited. He had made only 50 league appearances for Los Che when in 2009 he left Valencia through termination of his contract.

Arsenal signed Gilberto from Atlético Mineiro for a reported fee of £4.5 million amidst lots of controversy. He had an issue of obtaining a UK work permit while his parent club faced a transfer embargo due to unpaid wages to some players at the club, including Gilberto.

Though he faced problems initially to adjust to the London life, on pitch he was brilliant for the Gunners. In 2004-05, he fractured his back and there were doubts whether he could at all play football again. 2006-07 was probably his best year at Arsenal, where he became the second highest scorer at the club with 10 goals and was judged as Arsenal’s player of the season.

In 2008, he joined Greek club Panathinaikos and two years later he ended his 11-year European journey by returning back to his native land where he signed for Grêmio.

He is the first ever Brazilian to play for Arsenal and sadly his career in London didn’t last long. He replaced long-time fan-favourite Nigel Winterburn and managed 55 league appearances. In his second season at the club he got a fierce competitor in Ashley Cole and it was time for him to move elsewhere.

He joined Celta Vigo and later played for Barcelona. During his time with the Catalan giants, he earned great success, winning, three league titles and two Champions League medals. He played one season thereafter with Manchester City and announced his retirement in 2011.

He was signed from São Paulo for a fee in the region of £3.4 million. In 2008-09 season, he started to play regularly in the side after the departure of many experienced players such as Mathieu Flamini, Gilberto Silva and Alexander Hleb. He partnered Cesc Fabregas in the midfield and played 51 games in all competitions that season, bagging seven assists and scoring three goals.

The rise of Jack Wilshere coupled with his own injury problems prevented Denilson from getting regular starts and eventually was sent on loan to his former club where he is staying for the third year running.

Baptista joined Arsenal from Real Madrid on the transfer deadline day in exchange for Jose Antonio Reyes, where both the players swapped the clubs on 12 months loan deals. The Brazilian international didn’t impress enough in the league but was consistently on target in the League Cup.

Overall, ten goals for the Gunners and after his loan deal finished he was sent back to Madrid.

He didn’t reach the dizzy heights as expected upon returning to Madrid, but managed to play for Serie A side AS Roma. He is currently playing for Spanish club Malaga.

Juan didn’t feature in any league matches for the Gunners. He made only two first team appearances for the Gunners, both coming in cup matches. He suffered a serious knee injury that ended his career at Arsenal completely.

He returned to Brazil in 2004 and played for Fluminense, Flamengo, São Paulo and Santos. He has two international caps under his belt.

Like all the Brazilian who played for a considerable amount of time at Arsenal, Eduardo was also a crude victim of injury. He was rated very highly when he joined the team from Dinamo Zagreb for £7.5 million.

In 2008-09, he suffered a broken left fibula and an open dislocation of his left ankle in a match against Birmingham City after getting at the wrong end of a tackle from Martin Taylor. It was such a horrific challenge that Sky Sports decided to not even show the replay.

He returned to action again in 2009 but was never the same player anymore. In 2010, he joined Shakhtar Donetsk where he is currently plying his trade.

Thus, we can see apart from Sylvinho, no other Brazilian has had success after leaving Arsenal. Most of the player’s career have gone downhill after they have left the Emirates. Will the same story prevail with Santos?