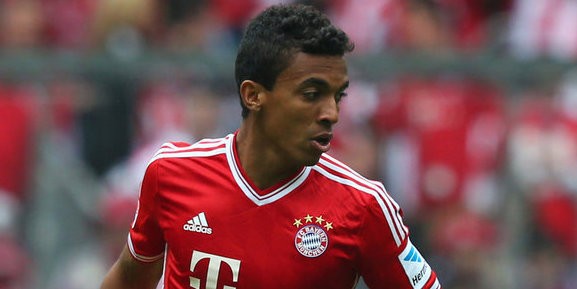 Arsenal will push hard to secure a deal for Bayern Munich midfielder Luiz Gustavo, while have kept their hope alive for Liverpool’s want away striker Luis Suarez as well.

Arsene Wenger has been handed a transfer war-chest of £70 million but so far the Frenchman has only added young Yaya Sanogo on a free transfer from Auxerre. The Gunners boss understands the need of reinforcement and has confirmed his interest in the 26-year-old, though said nothing is concrete yet.

Wenger has been trying to find the right player to improve his central defensive midfield position, and has had bids rejected for Bayer Leverkusen’s Lars Bender and Toulouse midfielder Etienne Capoue before.

Gustavo will be an ideal player Arsenal need at the moment. Though not as glamorous and marquee name as opposed to some of the players the Gunners have been linked to this summer, but he represents the perfect anti-dote to their multitude conundrums.

The Brazilian was one of the key members of the Bayern squad that won treble last season under Jupp Heynckes. However, with the arrival of Thiago Alcantara from Barcelona, it is expected that he would drop down the pecking orders at the club under Pep Guardiola, which would hamper his chances of representing his nation for the World Cup next year and hence a move to North London makes sense.

Being a strong player on his left foot, he can play in three positions – centre back, left-back and defensive central midfield.

The former Hoffenheim star possesses bundles of energy in the midfield and is a very good tackler too. In 22 league appearances last season, he produced 54 tackles with another 33 interceptions. But, his main strength lies in short, crisp passing and had a passing accuracy of 93% last season.

Further, he can fill up the gap comfortably at left-back with Spaniard Nacho Monreal injured for the opening few games. Also, with skipper Thomas Vermaelen injured, he can occasionally start as a centre-back, covering as a reliable back-up for Per Mertesacker and Laurent Koscielny.

Gustavo would definitely be an upgrade over Abou Diaby, who has spent more times on the treatment room than on pitch in last few years. He will add steel and flair to the midfield when paired with Mikel Arteta. Further, his reliable presence at the heart of midfield would allow young Jack Wilshere to move further forward and get involved in a more creative role.

However, the Gunners are not alone in the chase and according to latest reports in Italy, Napoli have also entered the race to sign the highly rated midfielder.

Meanwhile, according to the Guardian, Arsenal haven’t given up yet completely over the Suarez saga and are prepared to make a third offer, despite Liverpool owner claimed the player is not for sale .