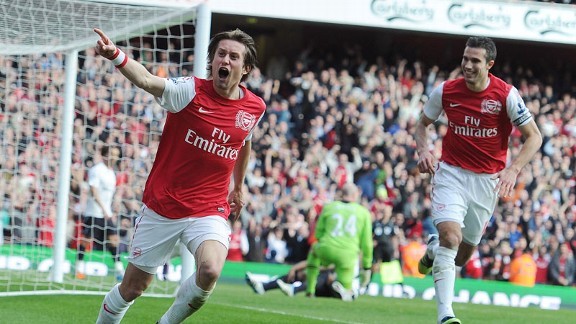 It was another Premiership classic at The Emirates in the season that just keeps on giving. An absorbing and enthralling contest began in ominous fashion for Arsenal as a Tottenham counter allowed Louis Saha to expose gap in the home side’s backline wider than the River Thames. The Frenchman proceeded to give Spurs a fourth minute win with an ultimately messy looking goal. Things were to get worse before they got better for Arsenal as unpopular old boy Emmanuel Adebayor dispatched a 34th minute penalty past Wojciech Szczesny.

Arsenal were two down but never truly looked out and it was to be a case of the night falling darkest just before the dawn for the gunners.

The unlikeliest of scorers, scored in the unlikeliest of fashions as a Bacary Sagna header put Arsenal on the scoreboard. If Arsenal’s first goal scorer was a surprise they’re second was inevitable as was the calibre of the goal. Robin Van Persie’s wand-like left foot curled a shot round the outstretched arm of Brad Friedel sending the North London rivals in all square at the end of a breathless first half.

It was a half-time which saw potential future England manager Harry Redknapp make a tactical change which appeared to play into their hosts hands. Saha and Krancjar were replaced by Van Der Vaart and Sandro as Spurs seemingly attempted to add bodies to the centre of midfield rather than continue, despite success against Arsenal’s vulnerable defence, to trade direct counter-attacking blows with their rivals.

A negative move exacerbated by Tottenham’s sluggish start to the second half as they found themselves behind within six minutes of the re-start when Tomas Rosicky stabbed home a Sagna cross from close range.

Sky Sports’ commentary team of Martin Tyler and Gary Neville greeted the incredible turnaround with the mutually agreed assertion that it was games such as these that made the English top tier the best in the world.A contention that acknowledged technical inferiority to La Liga, but rightly emphasised the superior levels of entertainment and excitement offered. Indeed, in the 14 games involving two of top five clubs this season there has been an incredible glut of 68 goals. A staggering average of 4.9 goals a game!

There is no other league in Europe which can compete with the sheer number of almost absurdly open and exciting encounters between its top clubs. Admittedly, there are freak games in every season, but the hallmark of this season is that those tight and turgid affairs, formerly quite commonplace between the premier league big hitters, have now become the anomaly.

The decline in standard of our top clubs defending has been well-documented and has significantly contributed to a poor showing in the Champions League, likely to result in no quarter-final representative for the first time since 1996. It is a fact that has left some arguing that it is clear evidence that the Premier League is not the world’s best.

Yet, despite a season of disappointment in Europe, domestically the multi-billion dollar brand of the Premiership has only been enhanced by a season bursting at the seams with exciting matches featuring twists, turns and goals a plenty. The neutral fan loses little sleep over defensive frailties and European failures when such compelling football delights are been offered up on such a regular basis.

With regards to what makes a league superior the argument will continue to be one of technical proficiency versus shear blood and thunder entertainment and as with most arguments, simply comes down to a case of personal preference. However, it appears the vast majority of fans around the world favour the latter and as a direct result so do the boardrooms of worldwide sports broadcasters. The Premiership television contract dwarfs those of its European counterparts with the four corners of the football watching world hungry as ever for its colourful thrills and spills.

The most recent of which culminated in a remarkable 5-2 win for the home side following a further two goals from Theo Walcott. The second a precisely placed shot past Brad Friedel the first a delicate chip following determined work by Van Persie. The Dutchman is particularly deserving of special commendation for his performance.

He led the line excellently and at times single-handedly showing he has stacks of guts as well as guile. A player who is evidence also, if indeed even needed, that the Premiership’s rip-roaring excitement also comes with ample technical aptitude. Arsenal must move hell and high water to keep their mercurial skipper at The Emirates.

The next notable stops for the Premier League circus are Anfiled and White Hart Lane for tasty looking encounters a week from now which pit Liverpool against Arsenal and Spurs against Manchester United respectively. Who would bet against them being wide-open encounters that further reaffirm the Premier Leagues status as the best in the world?