Arsenal 0-2 Chelsea: The Blues’ bench-boys turn on the style at the Emirates 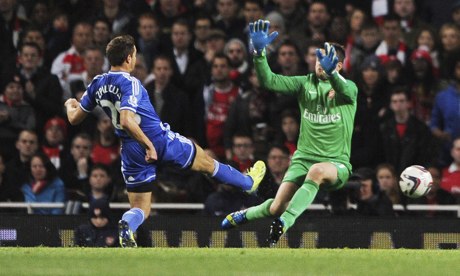 When Jose Mourinho bemoaned Chelsea’s fixture pileup on Monday, with his side making the short but sharp trip to Arsenal just days after hosting Man City at the Bridge, few would have taken his words at face value.

The trademarked mind-games incorporated by the feisty Portuguese have become something of an acquired novelty for fans and pundits in the EPL, and his latest outburst did little other than set the stage for his second-string to come out and provide the spectacle that their manager cryptically doubted.

They did just that, as Chelsea’s true strength was highlighted, in spades. Of the eleven that started the City game on Sunday, only Gary Cahill was in the line-up at the Emirates; with Torres, Lampard, Cech, Hazard and co rested, as the extraordinary depth in squad available to Mourinho was shown to full effect.

International captains, experienced destroyers, and raw talent took to the field, combining expertly on Tuesday night to put Arsenal to the sword, coming out comfortable 2-0 winners.

The hunger displayed by the Chelsea men can only be extracted by those with something to prove, and the likes of Michael Essien, Samuel Eto’o and Jon Obi Mikel were real exponents of this thesis; chasing down every ball like rabid wolves, and linking up with their teammates in such a way that makes a mockery of their fringe existence at Stamford Bridge.

Cesar Azpilicueta’s first half opener typified this aggressive, confident style. Much like compatriot Fernando Torres’ fortuitous match-winner on the weekend, the right-back gambled after a deflected ball bounced up to the sub-par Carl Jenkinson. One misguided back pass later, and Chelsea found themselves a goal to the good, and their intensity did not waver.

Arsenal, who started the likes of Santi Cazorla, Aaron Ramsey, Laurent Koscielny, and Jack Wilshere, could not cope in the first half, and were rightly galvanised after the break, with their play taking on a new dimension of thrust. The introduction of Mesut Ozil on the hour mark further proved the Gunners’ intentions, with Arsene Wenger desperate to add an early trophy to validate their early season form.

But Chelsea were in no mood to enable their fierce rivals, as Juan Mata’s scintillating strike from the edge of the box, just as the Gunners looked to get back into the tie, deflated an already pessimistic Emirates crowd. With headlines aplenty since his recent downturn in fortunes, it was refreshing to see the Mata of old power home a goal befitting of not only his own ability, but of his sides general industry and drive on the night.

Nicolas Bendtner, doing his best Ibrahimovic impression with an absurdly balanced bun atop his head, did very little to justify his inclusion, and the inevitable appearance of Olivier Giroud was the final role of the dice for the beleaguered Wenger. The response was limited, as a handful of long-shots failed to adequately test Mark Schwarzer in the Chelsea goal, despite some occasionally decent build-up play.

With the Gunners losing out in key areas all over the pitch, a comeback never seemed likely; and with every one of Chelsea’s ‘reserve’ team interlinking brilliantly, the game was taken away from the Premier League leaders quite definitively.

Mata, and the exceptional Willian, ran the lines tirelessly; while David Luiz and Gary Cahill had one of their most solid games together in the heart of the Blues defence. Everything clicked on the night for Chelsea; and Arsenal’s limited riposte will have Gunners’ fans typically doubting the longevity of their overall form, away from the Capital One Cup.

Mourinho will be delighted with not only the result, but the response from his squad, in what is yet another statement of intent from the Blues as to their title credentials. With arguably two full teams at his disposal, with the ‘lesser’ capable of brushing aside a strong Arsenal outfit in their own back yard, Jose’s Chelsea machine will take some stopping.