One of the tournament favourites take on a lot of people’s outsiders for the World Cup on Saturday, with Argentina facing Belgium in Brasília for a place in the semi-final.

Argentina needed 118 minutes to open the scoring against Switzerland in their second round tie. The one time the Swiss defence allowed Lionel Messi time and space he hurdled past them to set up Ángel di María for a one-on-one that he finished well.

Belgium too were taken to extra-time in their second round tie before wearing the USA out to take a 2-0 lead. After Julian Green volleyed the Americans back into the game Belgium appeared to go a bit shaky at the back and it was goalkeeper Thibaut Courtois that bailed them out.

The South Americans may have won all four of their games by the odd goal but Bosnia and Herzegovina, Iran and Switzerland all played very defensively against them. Nigeria were more open which saw Argentina score three goals; two of them by Lionel Messi.

Belgium have been a bit more open which could see this being end-to-end. Or perhaps the European side will shut up shop and play defence first with the view of scoring on the counter. Against the USA the defence did look lunch a bunch of talented individuals more than a group at times, but the goal conceded in extra time was their first in open play in this tournament.

Marcos Rojo is suspended having picked up two yellow cards. Argentina don’t have any natural replacement at left-back so José María Basanta may be the option as an experienced left-footed option.

Sergio Agüero isn’t expected to be fit in time which should see Ezequiel Lavezzi maintain his place in the starting lineup despite a largely ineffective performance against Switzerland last time out.

Defenders Anthony vanden Borre and Laurent Ciman are out of the tournament through injury but Marc Wilmots has the same side available that beat the USA.

The head coach has a difficult decision to make between which striker to start up front as Romelu Lukaku make a great impact as a substitute for Divock Origi in the last round. Kevin Mirallas coud also come in for Dries Mertens who had a poor game. Bringing in Mousa Dembélé for Marouane Fellaini may also be a sensible change. 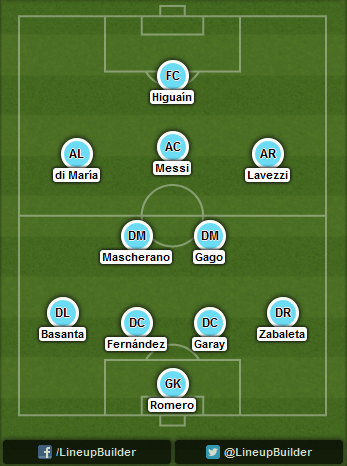 The one change at left-back is the only switch forced upon head coach Alejandro Sabella whom we think will keep the remaining ten starters. 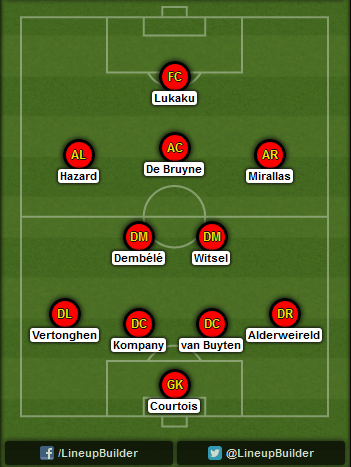 Marc Wilmots has done a good job in keeping his team fresh and making impact substitutions in this tournament. Now he has some key decisions to make with the starters against Argentina based on performances in the last round.

Belgium have to shut down Lionel Messi and keep him quiet if they have a chance of shutting out Argentina. The aggressive Axel Witsel may be given that responsibility, whilst Vincent Kompany will offer backup. Marouane Fellaini not the best for this role is why I think he will be dropped. Daniel van Buyten may not have the legs to do so for 90 minutes. Messi has been involved in almost all of Argentina’s positive attacking play in this tournament, scoring four of their seven goals, assisting one more and delivering the free kick from which Bosnia and Herzegovina put into their own net.

These two will know each other from the Premier League. Chelsea will the victors in both games last season. The Argentina defence has not looked so impressive despite keeping clean sheets in half of their matches. This is a real test for them. Nigeria scored twice and with the likes of Eden Hazard, Kevin De Bruyne, Kevin Mirallas and Romelu Lukaku available as well as others, Belgium can probably expect to get on the scoresheet. The left forward will also have support from Jan Vertonghen pushing on from left-back.

The Chelsea striker showed what he was capable of in extra-time versus USA after a quiet first two games. He matches up well against Federico Fernández who has not had the best of tournaments. If the striker can get on this defender, away from Ezequiel Garay, he should be able to find both chances and opportunities to create chances. He’ll also have Kevin De Bruyne behind him in support.

With both teams struggling for form, this could fail to live up to the hype in terms of excitement, but La Albiceleste should have just enough to overcome Marc Wilmots’ young Belgians.