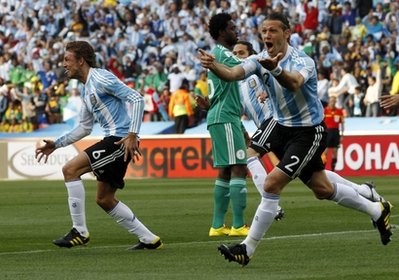 Diego Maradona’s first World Cup match as a manager ended with a win but left many with doubts about their overall chances.

It ended up being a 1-0 win for Argentina but it could have easily been a bigger margin. Argentina would have around 65% of possession and over seven shots on goal but only managed one goal. It was scored from an unlikely source as Gabriel Heinze headed in a corner kick in the 6th minute.

Nigeria would have chances in the match and it was a nervous match for Argentine fans. Despite both teams getting chances for the rest of the match it would remain 1-0 and Maradona continued the streak of Argentina winning their opening World Cup match.