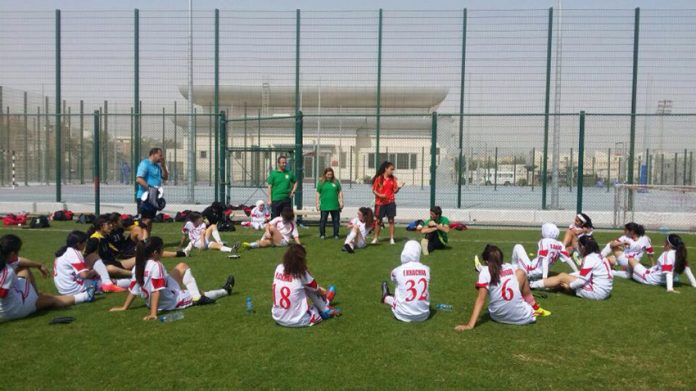 To the uninitiated ‘women’s sporting events’ and ‘the Arab world’ are phrases that would not normally appear in the same sentence. But, dig a little deeper than uninformed cultural, or gender, bias and there is a whole new world of international competition for Middle Eastern women that is slowly but surely eroding years of suppression.

Daring national and international associations, not to mention courageous individuals, are gradually establishing sport for women, in the Arab world especially, and making a mark on the sporting calendar. Women`s football, or soccer, is very much on the rise thanks in the main to media coverage of recent World Cup tournaments, allied to moves such as FIFA’s lifting of the ban on the wearing of the hijab or head scarf, in 2014. Jordan, not known as a hot bed of football is already gearing itself to hosting the FIFA Under 17 World Cup for women, between 30th September and 21st October this year. Yet the Iran football team for women was only reformed as recently as 2005.

Leading the way for women`s sport in the Middle East are the two tiny but oil-rich states of Qatar and Oman. The whole world, quite literally, knows of the biggest sporting event on the planet, the World Cup, that is set for Qatar in just six years time. Yet there is very little publicity for a string of sporting events, specifically for women as well as those for both men and women, coming up in the Arab world, well before then.

Early February 2016 saw the completion of the four- day Ladies Tour of Qatar and that event is just one of a catalogue of cycling events planned for this year. The 4th International Handball Tournament for Women was held in the first week of February, in Doha, as was the Qatar International Ladies END Ride equestrian event.

The African Continental Championship, cycling, begins in Morocco in the last week of February and includes the African Womens’ Junior event as well as the Women’s Elite. The UCI Road World Championships that were planned for September, which will include a time trial for Elite Women as well as a road race and time trial for Junior women, has been moved to October to avoid the heat.

Events coming up in 2017 include the FIBA Africa Under 16 Championships, for both men and women.

The world’s top squash players will be heading for Egypt in April 2016 for the El Gouna International seeking points for the PSA Road to Dubai Standings and a place at the Dubai PSA World Finals Series in May 2016. And Women’s squash in the Middle East received a terrific boost with the showing of Egypt`s Number 2 female player, Nour El Sherbini, in winning part of the biggest prize fund in tournament history when she claimed her first ever PSA World Series crown.

In 2015 she won the prestigious Carol Weymuller Open by beating the then World Number 1, Raneem El Welily, in the semi-final before defeating Joelle King in the final. A month later Nour reached the final of the Qatar Classic. Not bad for a young Arab women, who will still not be 20 when she heads for her homeland and the El Gouna International.

Undoubtedly the oil cash of Qatar and Oman is leading the way for sport in the Middle East and with it inspiration to continue the elevation of women’s sport in a region where the obstacles are more culture than sporting. However, other nations are following suite and, as well as already mentioned: Jordan, Egypt and Cameroon, Algeria stages several cycling events in March and the Tour of Cameroon takes between March 12th and 20th 2016.

There is little doubt that sporting events for women are growing in number, as well as importance. However, the 2019 World Athletics Championships and the 2022 World Cup are critical for the development of sport in the Arab world, full stop. Those world events will raise the profile of Arab sport but they will also bring a responsibility to improve the place of women’s sport in the region and complete a proper, level-playing field.

Up to 2019, but crucially beyond, the world will be watching to ensure that any progress made over the next few years does not come to an abrupt stop beyond that point.