How Daley Blind changed the game for Netherlands against Spain 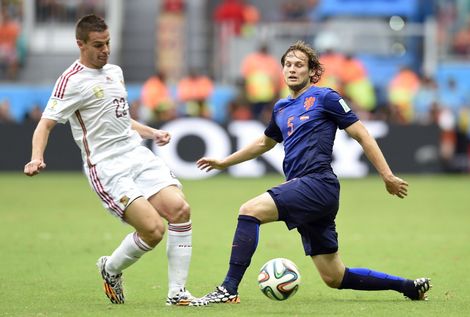 Four years back there was no gulf in class, there was no superior team, yes one was a higher placed favourite than the other but on paper they were closer than you’d imagine. It was an even affair, with two equally solid & disciplined teams with clear tactical identities. Four years later though, there was a massive gap between Spain’s quality & that of Netherlands. A gap that is not reflected in that scoreline.

Spain came into the game as overwhelming favourites while the Dutch were everyone’s predicted likely team to disappoint at the World Cup. And it looked that way for large parts of the game. Spain dominated proceedings while the Dutch were lost for ideas on how to bypass the midfield, resorting to long balls. Up until the 44th minute it was all going according to plan until…a Dutch revival.

The plaudits will go to Robin Van Persie and how he pulled off a quite incredible header, how he pressed and never gave up to force Casillas into a mistake, how a 30-yr-old Robben who apparently lost all his pace and energy took on the Spanish defence, showed incredibe composure and finished with two goals himself. Yes the attacking duo of Robben & Van Persie won the game for Louis Van Gaal. But there was one man who put in a shift which lacks the attention the media will give.

Up until the 40th minute, it was all going according to plan for the Spanish. The Dutch had no ideas, were resorting to hopeful long balls. Van Persie was chasing lost causes, Robben was never in the game and as all the pundits predicted, Oranje looked like the big team to disappoint at this World Cup. And then…

Van Persie flew at another hopeful ball, and while 9 times out of 10 he’d chest that down, get it in control, take a touch or two and smash it with his left foot, this solitary time he jumped at it, diving at the ball and looping his header over Casillas and into the goal. A remarkable effort that left everyone, including Van Persie, stunned. But go back a bit and notice who played that long ball in. While the entire Dutch attack comprised of mere long balls, one had finally come off and it was Daley Blind’s pin point pass reminiscent of the one De Boer laid on a plate for Bergkamp back in 1998. It was not totaal voetbal, but it was perfect football. A pin point cross and a solid header.

It wasn’t the first instance that Daley Blind had played a threatening ball into the box, he was a constant danger going forward from the flanks, helped by the fact that Cesar Azpilicueta was regularly looking to join up with the Spanish attack leaving acres of space for the wing-back to exploit. Alonso made attempts to cover the zone but the Ajax man was finding joy down the left flank.

It actually showed the extent of how poor the Dutch were in attack, that the likes of Sneijder, Robben & Van Persie were unable to conjure up meaningful chances and create a Dutch attack, and instead their left-back seemed like the more potent threat in the final third. The marking that the Spanish defence employed on Robin Van Persie helped their cause in preventing threatening balls from Blind resulting in more chances, but Del Bosque’s men were guilty of not dealing with the 24-year-old.

The goal that Blind set-up took the sides in all square at half-time. The Spaniards remained over-whelming favourites. They were winning the midfield battle and the Dutch three man defence was tempting the likes of Iniesta to play through balls in to Diego Costa. They were expected to see the result out. The Van Persie goal assisted by Blind was a wake up call, not that the Spaniards needed one.

But just 8 minutes into the second half and against all odds, the Dutch were now 2-1 up, coming back from a goal down. Robben with incredible composure, controls the balls, and smashes it past Casillas. The Dutch had the lead, when everyone expected Spain to steam roll them. Go back to how that move started and again it was another perfect ball from Daley Blind, finding Arjen Robben in the right area. Pin point accuracy and devastating results, Blind was running the show for the Dutch.

His ball a minute before half-time, and a few minutes after changed the course of the game, as Blind created both those goals out of absolutely nothing. Not only did that affect the scoreline but it meant that Spain had to come out more, with their midfielders and defenders advancing, at the cost of the compactness they had created in the middle of the park. De Vrij’s goal only helped this further, but as we saw for the 4th & 5th goals, the chances came from the fact that the Spanish were short at the back, short because of Daley Blind’s two incredible assists that forced both full-backs to move forward. Had neither of Blind’s balls come off, we may well have seen a much different result, because despite the 5-1 victory, Van Gaal will have to realise that the long balls were just not working.

Although it is just one game, in a World Cup where any side can play a maximum of seven, this result carries incredible consequences. With Chile’s win over Australia and Netherlands’ expected win over the Socceroos in the next round of fixtures, Spain could be in danger of going out at the first hurdle. If the South Americans can get a result against the defending champions, it would mean that a draw could be enough in the last game for the Dutch & Chileans to go through.

While years from now the Dutch and football experts worldwide will recall Van Persie’s header, a small faction will remember this match for Daley Blind, Dutch Footballer of the Year and the man whose efforts (possibly) knocked Spain off their perch.