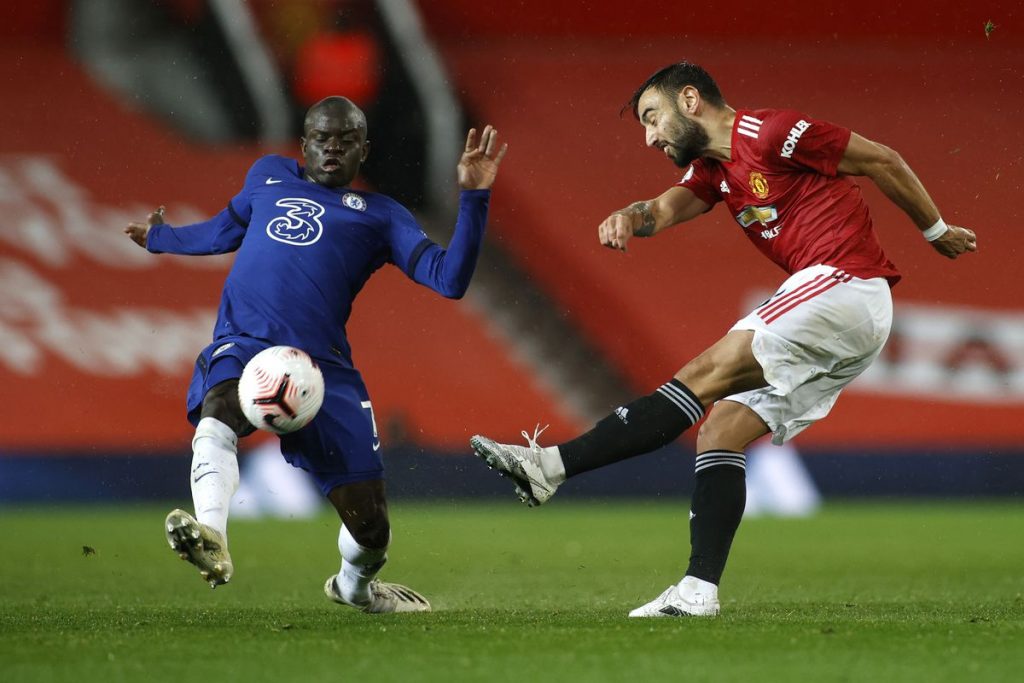 Manchester: Manchester United and Chelsea played out a drab 0-0 draw in dire conditions at Old Trafford on Saturday.

The rain lashed onto the pitch as neither side was able to breach the other’s defences.

The draw meant that United have now failed to win any of their first three home games into a new league campaign for the first time since the 1972-73 season.

Chelsea will perhaps return home happier with a point secured away from home but Frank Lampard’s expensively assembled attack have their work cut out to prove that they can indeed challenge for the title this season.

Lampard opted for a three centre backs in defence with Thiago Silva at the heart of it. New boy Edouard Mendy was back in goal while the attacking trio of Timo Werner, Kai Havertz and Christian Pulisic made the front three.

Solskjaer reverted to a back four after his side’s clash against PSG earlier in the week that saw him field a back three with two wingbacks.

However, the biggest test for the United defence was the inclement weather that saw rain lashing down the pitch making it difficult for players to manoeuvre.

A solid outing from the pair of Victor Lindelof and Maguire restricted Chelsea to just one attempt on target. Lindelof has the uncanny knack for saving his best performances against the elites and the Swede proved that once again with an impressive outing.

Luke Shaw, who seemed more comfortable in a three-man defence against PSG, struggled to raise his standards starring in a traditional left back role. Shaw was often caught on the counter and offered little to nothing down the left flank when in attack.

Aaron Wan-Bissaka did comparatively better on the right but nothing that would put you on the edge of your seat.

New signing Donny van de Beek was left on the bench yet again as Solskjaer opted for a midfield fulcrum of Scott McTominay and Fred. The tenacious pairing, although impressive in moments, could not breach N’Golo Kante’s control over the midfield.

It once again looked like United’s bench was more menacing than their line-up as Chelsea’s previously porous defence was barely bothered in a very drab first half.

Daniel James was handed another surprise start by Solskjaer but the Welshman failed to capitalise yet again. He was much deservedly binned for Edinson Cavani who made his much-awaited debut at the hour mark. Paul Pogba was sent on to replace Juan Mata who came close to scoring but for his shot to be parried away by Mendy.

Cavani and Pogba’s introduction meant that United now operated on a different set up. The Uruguayan moved to a more central role up front forcing Rashford out to the flanks. Bruno Fernandes who operated as a No.10 earlier in the game was shifted to the right side of midfield as United set up in a variation of 4-3-3.

Cavani almost gave United the lead with his first touch in the game but his effort hit the side net.

Calls for the introduction of Van de Beek to inject urgency in midfield were overlooked as Solskjaer introduced Mason Greenwood into the mix late on to breach the Chelsea defence but Lampard’s side remained resolute at the back.

Perhaps the nearest United came to scoring was when Mendy’s attempted pass rolled agonizingly close to his own post for a corner.

Just when Solskjaer won the praises for being proactive from a tactical perspective against PSG, the Norwegian seemed to be out of ideas against Chelsea. From 4-2-3-1 to 4-3-3, defences reigned supreme as both the sides failed to breach each other’s tight walls.

Ahead of their trip north to Manchester, Lampard’s side had shipped in nine goals in their previous five Premier League matches – three against West Bromwich Albion and three against Southampton.

The stalemate in the Champions League group stage opener against Sevilla put things back in perspective but Lampard tweaked his side again against United, moving to three at the back with Silva in the heart of defence with Cesar Azpilicueta and Kurt Zouma and Reece James and Ben Chilwell operating as wingbacks.

It worked remarkably well with the back five offering little to no space for United to weave their way through to the goal. Three out of the four shots on target were saved by Mendy who had a very impressive evening.

While Lampard’s side has sorted out defensive issues, the expensively assembled forward line looked toothless.

In 90 minutes, Chelsea had six shots with just one on target coming from Pulisic, which was quite comfortable for a keeper of David de Gea’s stature.

Chelsea largely look like a side with no balance or strategic thought in attack. A side that seems to rely upon a moment of magic from any of the talented front three rather than a meticulously designed tactical plan.

With Kante and Jorginho forming not the most creative pairing, it all boiled down to Pulisic, Havertz and Werner to conjure up a piece of magic.

Havertz playing wide right meant Werner was left alone without any creative service whatsoever to deal with the unyielding pair of Lindelof and Maguire. To put things in perspective, Werner completed fewer passes (13) than any player on the pitch.

The talented US international Pulisic too was devoid of any ideas and spent most of the game running after the ball rather than with it.

Chelsea’s most potent attacking threat came from James whose darting runs down the right flank kept United busy. However, the final ball from the youngster lacked quality.

The only positive thing out of the game for Lampard is the impressive defensive performance that his players produced after conceding three against Southampton last week.

Expectations were high for this match. A high-scoring season promised an entertaining game, with Manchester leading on the bookmakers’ lists. Due to Covid situation, fans are mostly left watching football from their homes. This has considerably boosted need for online aspects of the experience – especially when it comes to betting. In this respect, many who have turned to online casinos which also incorporate sports betting, were disappointed by the result and low number of goals. As mentioned, expectations were high across Europe, with german Casino Überweisung provider association reporting record number of payments to operators prior to the match.