Earlier in the week, after we gave by far our most determined, outstanding and tactically superior performance of the season, it got me a thinking. When WAS our last truly incredible performance? Well, few would disagree with me when I suggest that it was in fact at the very same venue that today’s game was held last season.

No, not the league game in November ’08 when Nasri’s brace beat us 2-1, but the more beautiful, continental spectacle last May. The 3-1 win in the Champions League Semi final second leg was the last time, arguably until mid-week’s performance against City, that we truly performed to the esteemed honour that the title of ‘Champions’ holds.

Well here we are, back for the first time since the day we taught Arsenal’s ‘boys’ exactly how it’s done. So what’s changed? Well a fair bit, considering the architect of that victory is now playing in Spain and, ironically, Arsenal have learnt to play. Quite well, in fact.

So the questions that surrounding today’s visit would not only have considered the events last Spring and how things have changed for each respective side; however, more pressingly and relevantly for those concerned with NOW rather than THEN: although Wednesday nights performance was class, would the annoying amount of importance placed on a cup game have any sort of strain on the performance of this ridiculously vital League tie?

The team lined up in familiar fashion, although obviously there were changes (it IS Ferguson after all). The back 4 saw suspended Rio make way for Brown (interestingly not for Vidic…), and Park came in for Giggs. Other than those two additions, we fielded the same full-strength side that played so resolutely a few days earlier. Even though the game fantastically didn’t go through the ordeal of extra-time, and we came away from it injury-free, I somehow couldn’t help but feel that we could’ve done with resting a few for the more important and more challenging task ahead.

Thankfully, rather than rueing the decision to play a full-strength side for 90 minutes on Wednesday, we evidently continued where we left off. We emerged with the same desire and passion; pressuring the Arsenal defence from the start until a moment of inspired genius broke the deadlock.

After cutting up Clichy and Nasri with the sort of skill you’d expect to find at the heart of a Messi or, of course, Ronaldo youtube video, Nani dinked a cross so dangerous, that had Almunia NOT done all he could and flap it into the goal, it would have only reached Park at the far post to tap it in.

As a long-time and often harsh critic of the man, I’m in no way too embarrassed to give him the credit he deserves and pin-point his recent role as nothing less than essential. Nani’s seen the confidence and general ability of Valencia edge him further out of favour, or if not, simply played out of position on the left. After a chance selection ahead of Antonio last Saturday, he has gone on to enjoy his most prolific run in United colours since 2007. And to what incredible results. Fair play, son.

The momentum continued and enhanced, with a second brilliant and oh so reminiscent goal coming 4 minutes later. Again tailored by Nani, he recreated the stunning counterattacking winner from that Champions League night

On 39 minutes, Tyler stated proudly that, ‘if that game [the Semi Final] was Ronaldo’s, then today it is all about Nani’. Seriously, what has happened to Nani recently?? If the past week has seen us overcome opposition with the renewed optimism and potency of old to in turn reassert our seriousness towards this season, then of course Rooney’s goals have been valuable, however Nani’s contribution should definitely be held in equal regard.

But if we’re dishing out credit, it of course must dually be handed to the man who sprinted the entire length of the pitch in 9.2 seconds (the exact same time it took for the ball to reach the Arsenal net for United’s 3rd last May) to get on the end of the pass and score the goal.

I have now finally conceded, after a season of gazing in awe and uni-dimensional astonishment at only 1 United player – Pat Evra – that Rooney probably is our most important player; with the 3 games over the past 8 days proving that most intently. Today, although placed as a lone-striker where he was yet again largely isolated against the troublesome Gallas and Vermaelen, it is his goal that yet again will be talked about; ignoring any flaws in his game.

The third to kill the game off and round off another incredible Emirates exhibition was scored at the same end as that Ronaldo counterattack and saw 2 of the players involved in that same goal. Carrick (in place of Ronaldo for this goal), to Rooney, to Carrick, who chips it delightfully into the path of Park; who copies Nani’s run in the first half only to ignore the call of Rooney and go it alone. Another brilliant goal to give us a 3 goal lead on 52 minutes. A whole 10 minutes earlier than we sealed the Champions League game. 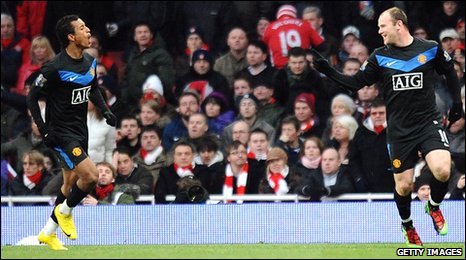 It was suggested that we would now go on and be completely rampant in front of their goal, as Nani, Rooney, Scholes and Park continuously pushed forward and created chances. In fact, it ended with the same score-line to round off a near flawless display and allow my blog, jam-packed full of comparisons, to appear legitimate!

Back in early December, I proclaimed defiantly and rather stupidly that Tevez’s winner against Chelsea, after we also thumped West Ham 4-0 away, to be the ‘turning point’ of the league season. Well, defeats against Villa and Fulham in the same month saw that statement completely discredited and prove that I should NEVER try and predict anything ever again. So I’m definitely not going to say it about today’s game. Instead, I’ll sit back and enjoy my entitled sense of triumph at having witnessed another Emirates master-class, and simply admire the determination instilled in our current performances that saw us turn a potentially challenging week into a success.

At times this term, during the culminating moments of our largely uninspiring season (such as during those defeats against Villa and Fulham), I have so longed for the sort of desire and prowess we displayed on the 5th May 2009; our last ‘great’ performance. After a week of formidability, 8 months later, we have finally witnessed it again. The stuff of ‘men against boys’. The stuff of Champions.

Watch all the goals here.