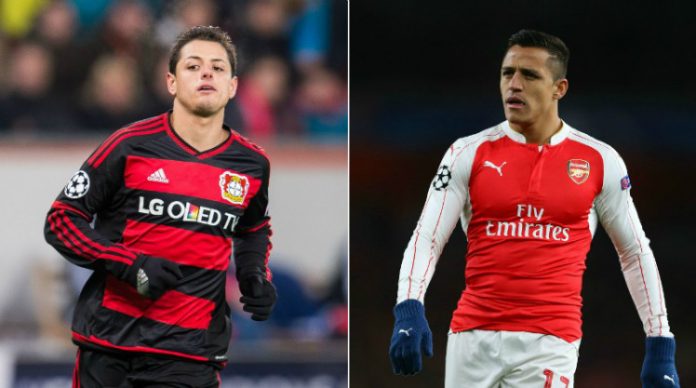 The former Manchester United striker has been sensational this season and has been a star for Bayer Leverkusen.

According to Spanish outlet Don Balon, Alexis has personally spoken to Wenger about the Mexican and has asked him to sign Hernandez in January.

Arsenal are sitting at the top of the premier league table after 19 games and the players as well as the manager are aware that this is a golden opportunity to win the league.

Arsenal have often been undone in big games due to the lack of a clinical finisher and Alexis believes that Hernandez can fill that void for a reasonable price instantly and aid their title challenge.

Hernandez had a respectable scoring record for Manchester United in the Premier League and it is tough to see him turn down a chance to join a club like Arsenal if an offer is put on the table.

Furthermore, with Hernandez, Arsenal will always be able to upgrade without incurring too much of a loss financially. And the player is well versed with life in the premier league which is an added bonus.

It will be interesting to see if Wenger considers his star player’s request and makes a move for the Leverkusen forward.

There is little doubt that an attacking quartet of Sanchez, Ozil, Theo and Chicharito would be a nightmare for every premier league defence.

Also if Arsenal do make their move for the Mexican, it will be fascinating to see how the United fans react to the news.

Hernandez used to be a fan favourite at Old Trafford and most fans were left unhappy with how Van Gaal got rid of him.