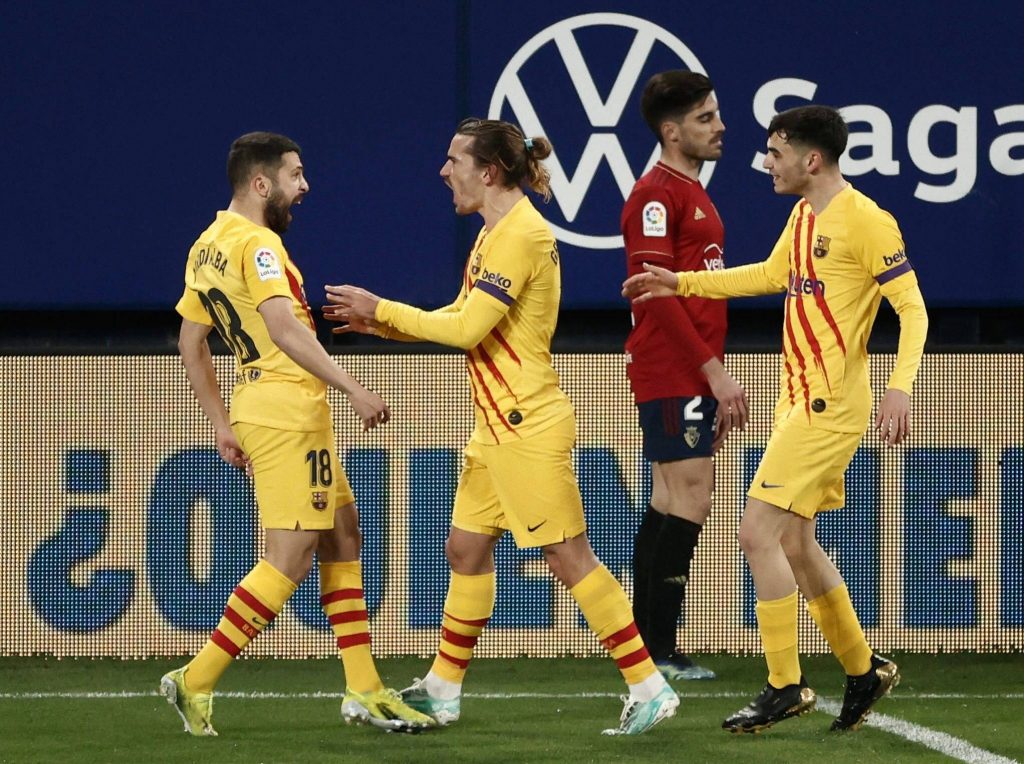 Barcelona moved within two points of La Liga leaders Atletico Madrid following a 2-0 away victory over Osasuna on Saturday.

The goalkeepers stole the spotlight in the early stages. Marc-Andre ter Stegen produced a fine stop to deny former West Ham United forward Jonathan Calleri from opening the scoring, before Sergio Herrera was shown a red card for handling the ball outside the box with Lionel Messi through on goal.

However, the linesman’s flag went up, and replays confirmed that Messi was offside in the build-up.

The visitors took the lead on the half-hour mark, with left-back Jordi Alba breaking the deadlock. Messi played a brilliant pass over the top for the Spaniard, who slammed into the roof of the net from a tight angle.

Shortly afterwards, La Blaugrana were thankful to Ter Stegen once again. Winger Ruben Garcia’s excellent first touch took him past Oscar Mingueza and through on goal, but the German denied him from close range.

It was a much quieter second half, with the only notable Osasuna chance falling to Calleri, but the Argentine directed his header wide when he perhaps should have done better.

But, in the 83rd minute, Barcelona sealed all three points. Messi laid off to young substitute Ilaix Moriba, who cut onto his left foot and unleashed a thunderous strike into the top corner from the edge of the box.

The result means that Ronald Koeman’s men will remain in second place this weekend, three points ahead of arch-rivals Real Madrid and two points off league leaders Atletico Madrid. The two sides face each other tomorrow in what is shaping up to be a crucial Madrid derby.

Man of the match – Jordi Alba

Just weeks before his 32nd birthday, the pacey full-back proved once again just how much he has left to offer at the top level.

After a slow opening half an hour, Alba was the one to kick Barcelona into gear with a magnificent finish. This was his third La Liga goal of the season – a personal best for the Spain international.

Anyone who watches Barcelona regularly knows how important he is to the Catalan giants going forward. His pace, bombing runs down the left, and connection with Lionel Messi have been notable features of their play over the last few years.

Ilaix Moriba – another young gem coming through the ranks

The last few months at the Camp Nou have been mostly doom and gloom. Illegal activities in the board room, the star man and captain submitting a transfer request, multiple humiliations in the Champions League, and no silverware to show for it.

However, Barcelona fans can take solace in the fact that they have several talented youngsters breaking into the first team.

Pedri has been one of the standouts in the starting XI this term, while Ansu Fati was making a huge impression before his injury.

And now a new name has arrived on the scene and made a splash. Spain youth international Ilaix Moriba made his debut in the Copa del Rey in January and has since gone on to have a positive impact in Barcelona’s league campaign.

His La Liga debut came in the 5-1 win over Alaves, during which he provided an assist for Trincao’s opening goal. He followed this up by combining with Messi for the Argentine’s goal in the away triumph over Sevilla.

The teenager impressed again off the bench in this game, displaying brilliant technique and composure to rifle one into the top corner in the 83rd minute.

It’s been a difficult 18 months for Barcelona, but there could be light at the end of the tunnel.