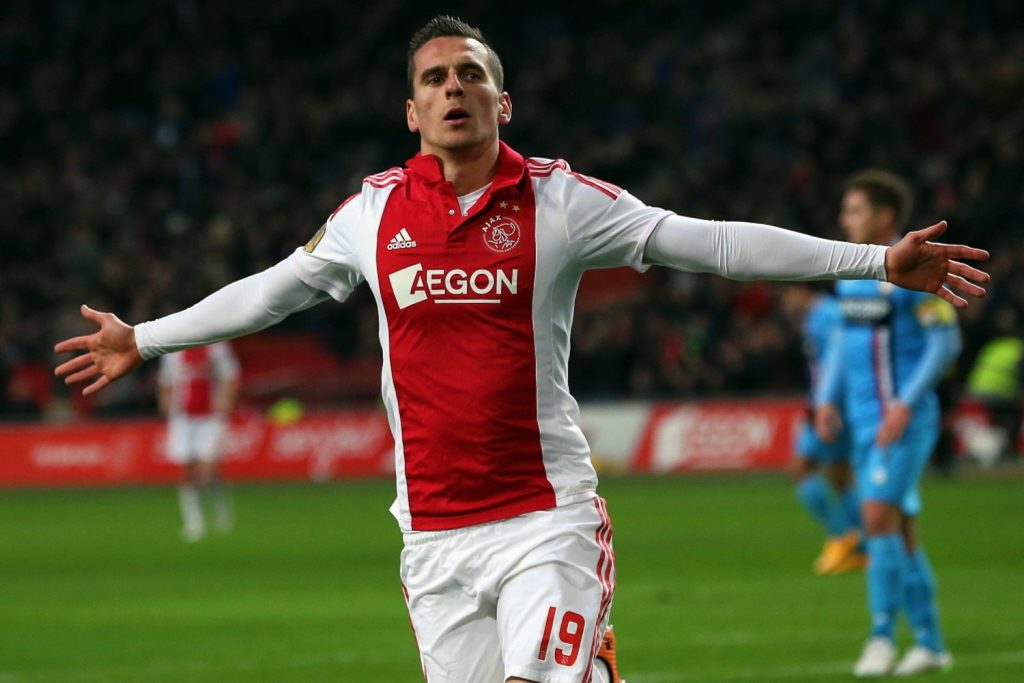 The excitement around Anfield is bubbling ahead of Jurgen Klopp’s first summer transfer window since taking charge of Liverpool, and fans will be expecting a flurry of activity as the German looks to stamp his authority on the Reds squad.

The Premier League club has been linked with bids for a number of Europe’s brightest youngsters in recent weeks. Unsurprisingly, Ajax has been sounded out on several occasions with Klopp reportedly ready to pinch any one of three hot prospects. The trio of Riechedly Bazoer, Anwar El Ghazi, and Arkadiusz Milik have all been touted as potential summer recruits, but it seems highly unlikely that Liverpool would be willing to take a risk on more than one of those rising stars. So which one should the Merseysiders focus on bringing to Anfield?

All three youthful stars boast a string of admirable attributes and, in truth, any recruitment from Ajax would be one made with one eye cast firmly on the future. Nevertheless, Klopp is in demand for quick success at Anfield and will want to cap next season with either Champions League qualification or a trophy; any player that can bolster the squad immediately has to take precedence over one that won’t.

With this in mind, Milik stands out as the best choice from Ajax’s trio. While Bazoer is probably the most sought after of the trio, the 19-year-old midfielder has openly conceded that he needs to stay in Amsterdam to continue his development. There’s nothing to say he won’t become a great signing for a Premier League or La Liga giant at some stage but, right now, he isn’t the perfect fit for Liverpool. Besides, enticing him away from the Dutch capital looks an almost impossible task for the next year or two.

El Ghazi is a potentially more attractive prospect. The 21-year-old’s quick-footed dribbles and accurate crosses could plug a sometimes problematic role on Liverpool’s right wing while his eye for goal could be a telling asset too. Meanwhile, the 6ft 2in winger’s strength would enable him to cope with the physical demands of Premier League football. Nevertheless, this raw talent is still far from being the finished article, and the Merseysiders may want to wait another year; after all, the Dutch international’s value is unlikely to climb over the next 12 months.

Conversely, if Liverpool are looking to sweep for Milik, Klopp would be advised to strike soon. Unlike his Ajax teammates, the 22-year-old striker will be heading to France this summer and a starring role alongside Robert Lewandowski could catapult him into the spotlight. Dutch website Online Wedden have pinpointed this as the reason that the Anfield club should aim to seal the deal sooner rather than later, and also believe that the forward offers a smaller risk than either of the Dutchmen.

They stated: “El Ghazi and Bazoer have both shown immense talent this season, but a move to England would see a huge step up in class. Whether they’d have the quality to bamboozle Premier League defences with such ease would be anybody’s guess and it could go one way or the other. But the ability to score a goal is something you either have or haven’t got; Milik certainly has, and we’ve no doubt he’d score at any level.”

With 18 league goals in 26 appearances this term, Ajax’s top scorer has shown a key eye for goal with both feet and his head. If he’s prepared to fight Daniel Sturridge, Roberto Firmino, and Divock Origi for game time, then he could be a great addition to Klopp’s new look Liverpool.

And if the 48-year-old German acts quick, he could grab a bargain before the youngster’s stock rises.