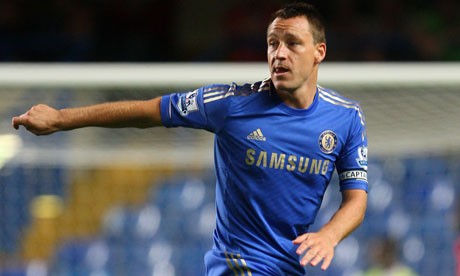 Under the guise of at least two – if not three – admiring managers, John terry turned in another performance of organisation, grit and determination last night against Galatasaray. He did of course err to allow the Turkish champions a second-half equaliser, but that to one side, he must have impressed each of those managers.

Blues boss Jose Mourinho probably needed no convincing of his captain’s worth to the squad. Having brought the centre back in from the cold where Interim Manager Rafa Benitez had left him for much of his tenure at the club, the Portuguese master coach is being rewarded with a string of performances that have not only given a solid foundation to the club’s potential success this season, but also in most other season’s – political matters allowing – propelled the player into any serious reckoning for a player of the year award. Terry’s contract expires however in the summer and unless a new one is offered, and that is by no means certain, the watching opposition manager may make his admiration of the player known.

Last summer, there were rumours that Roberto Mancini, manager of the Turkish club was interested in taking Terry to Istanbul for a swansong in the Turkish sunshine. Although at the time it must have appeared an interesting proposition for Terry, largely sidelined by Benitez, rumours of a Mourinho return and the inevitable lure of the one club player, meant that he stayed at the Bridge. If no contract renewal is offered, or if terms cannot be agreed this summer however, it may be an entirely different situation. Should Mancini decide to go back again for Terry, he may well be in luck.

It’s not known whether Roy Hodgson was watching the Galatasaray v Chelsea match last evening, but if he was, it was probably with a wry smile on his face. With the Brazil world Cup drawing ever close, having the outstanding English centre back in the Premier League unavailable for election must be a mighty frustrating situation for Hodgson. Terry’s excellent form of late may well be as a result of the decreased demands on his physical fitness due to his absence from international requirements, but if Hodgson could wave a magic wand and make all of the controversy around the player disappear, you can be sure he would do so and have Terry in his squad.

Very few players divide opinion like Terry, but in pure footballing terms there were probably at least three managers watching his performance last night that would like to have him available for selection after this season ends. The odds are that the opportunity will only fall to one of them. Chelsea fans hope that one will be Jose Mourinho.