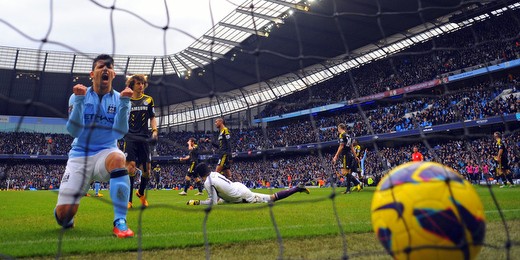 Anyone looking to find a clip of Manchester City striker Sergio Aguero’s ‘tackle’ on Chelsea’s David Luiz will not have to look hard. The web has been flooded with numerous clips of the now infamous challenge from the weekend, described differently in the many titles, but with similar themes, such as ‘horrific’, ‘terrible’, and ‘dirty’.

Those who have seen the clip, live or on the internet, can only have the one opinion: it was nasty from the Argentine, and he deserved to be sent off. While Aguero will not receive a retrospective ban, the matter still rages on between fans at home, and pundits on the box.

The ‘victim’ of the piece, David Luiz, has acted as peacemaker, stating that Aguero is not the type to make a habit of ‘assaulting’ players,

“Sometimes in the games people have five seconds, be angry and do things you don’t like to do. I think that.

“I never saw Aguero do bad tackles on other players. I think it was five-second angry and I forgive him.

David Luiz took the moral high ground with these words, insisting Aguero looks in the mirror and decides how best to portray himself in front of the masses. The Argentine responded on twitter, saying:

I’ve contacted @davidluiz_4 and apologized for what happened during the match. It was an impulse reaction that shouldn’t have happened.

When I saw the incident, I recoiled somewhat. I have a great amount of respect for Sergio Aguero as a player, and I consider him to be one of the best strikers in the world. I was mortified by his actions, and my mind automatically reset on the subject of the Argentine.

Isn’t it striking that one’s opinion of a player, one that has been formed over years of watching them, can suddenly flip on its head in a matter of seconds? I wanted Aguero to disappear into a hole in the ground, because I no longer had an opinion of him.

Aguero’s apology has come at the right time, and for the right reasons. He knows that his spur of the moment reaction, to what was probably over an hour of niggling fouls from the Brazilian, was born out of frustration, which manifested itself into an action which was certainly out-of-character.

It is not the first time a world star has let his emotions get the better of them.

Just ask Zinedine Zidane. Without a doubt, one of the greatest players to ever pull on a pair of boots, his reputation was forever tarnished by, as David Luiz puts it, ‘a five-second angry’. Now retired, you are just as likely to see Zidane’s name crop up in a sitcom-gag as you are in a football documentary.

Typing his name into a search bar, and the suggested searches include ‘Zidane turn’, Zidane vs. Brazil’, and Zidane Top 10 goals’. But first and foremost on the list is always ‘Zidane head-butt’, and the French legend will forever be remembered by the majority within this punishing encapsulation.

While I am not advocating his challenge, Sergio Aguero should not be a marked player, and I am sure that his tweeted apology will go a long way to ensuring this doesn’t happen.

It is easy to create villains in the world of football, just take Luis Suarez for example, but it is almost impossible to shake such a reputation when received. Much like the ‘tube of toothpaste’ analogy, it is much easier to do something than undo it, and Aguero’s ‘five-second angry’ was a something very easily done.

Although City were seeing out the game against Chelsea, on course to reach the final of the FA Cup, raw frustration still found Aguero, and he would have put his team in real trouble had he been caught jumping on his opponent by the referee.

This frustration can rear its ugly head at any stage of a game, and does not necessarily represent the character of the player stricken with it.

Francesco Totti, the Roma captain, was once red-carded for lashing out nastily at ex-Manchester City striker, Mario Balotelli, after he had nonchalantly weaved through a throng of Roma players.

Pepe, the Real Madrid defender, was also afflicted by intense frustration when an opposing player fell under his ‘challenge’ and won a penalty during a match in 2009. The Portuguese decided to hack at the player’s back and threw punches at two other players, venting spleen and earning himself a ten match ban.

And while these players are not shrinking violets on a normal day, they are not violent aggressors in the same category as former Manchester City players Ben Thatcher and Joey Barton.

Sergio Aguero can consider himself lucky for escaping punishment for his challenge, and he has done well to have taken the time to consider himself. The striker is still only young, and has a bright future ahead of him. He should be remembered for his footballing brilliance, and despite his actions on the weekend, there is little to suggest otherwise.

While a player’s frustration can be generally caged with experience, there is enough evidence to show that even the most battle-worn pro can succumb to it. Aguero is not a dirty player, and deserves the benefit of the doubt here; and I am sure he, along with the rest of us, can move on quickly.