Not since Neville Chamberlain stood on that plane back in the 30s waving the white paper has someone been more wrong than I was when I wrote my preview article. I totally called Grand Slam Sunday completely wrong. So here’s my final article on Grand Slam Sunday…until next time that is!

I called this an open game of flowing attacking football and probably a Liverpool win. I couldn’t have been more wrong could I?

This game was scrappy, at best. Few openings for both sides, and it only took one moment of ‘genius’ according to Sky Sports to undo Liverpool. The goal from Carlitos Tevez was at best, lucky. Don’t kid yourself into thinking that Rooney passed to Tevez, Rooney shot and Tevez was left unmarked to turn it in. That’s not the biasness of a Red bitterly tasting 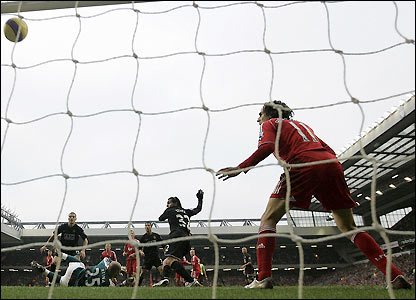 defeat, its fact. Rooney shot, the box cleared, and Tevez was unmarked and slotted it. The movement was good to give Rooney the space on the edge of the box, but the actual execution of the goal was lucky.

On the whole I think a 0 — 0 would have suited this game down to the ground, but then again maybe I’m being generous to my boys. Liverpool struggled to kick it into gear in the first half, with Hargreaves and Anderson marshalling the midfield well, and the wide men just not saying wide. I think if Benayoun would have gone down the outside of Evra as much as he cut inside maybe we may have got the ball into the mix a bit more, but no. Liverpool just lacked genuine width, and their most potent weapon through the centre, Fernando Torres, was nullified by the fact that Anderson was never 5 yards away from Gerrard throughout the game. There were a few chances however, there were 2 Torres drives flashed wide of Edwin van der Sar’s goal, and then he gifted Liverpool 2 chances because of a lack of judgement which they failed to convert. United on the other hand piled down the left, attacking Alvaro Arbeloa at every given opportunity, and the impeccable Patrice Evra got beyond numerous times and always looked a threat — as well as a strong defensive performance which included a goal-line clearance.

The second half was equally frustrating for Liverpool, with United suffocating any attacks from the midfield. On the rare occasion that Liverpool did break through the outstanding Nemanja Vidic picked off any passes with relative ease. I’ll say this though, when United did break forward the movement that their players possessed was out of this world. For example the Rooney miss, the movement by Ronaldo, Giggs and Wayne himself was unbelievable. They picked their way through and Rooney missed a complete utter sitter.

I think to sum up; United’s midfield was too good for Liverpool. Anderson picked up Gerrard excellently, and Hargreaves picked up any of those passes which dared to stray into United’s half. Also the central defensive partnership was excellent, and they just frustrated and frustrated Liverpool. Ryan Babel’s introduction was productive to an extent, but even so they were just too strong. I won’t say too good, but definitely too strong. Probably deserved the 0 — 1 score line.

Man of the Match — Anderson. I can’t believe the kid is still 19. He shows maturity way above his years, with his coolness whilst on the ball and also his defensive prowess which Steve Gerrard will testify too. It would have been a different story without him, and he fully deserves the Man of the Match in my book.

Again I called this the other way. But I did predict a tight game, and few opportunities either side. I was right in that respect I suppose, but I’m clutching at straws really.

The game was a battle though. 9 bookings say it all really. Arsenal saw all their key players — who I said would miss out — return from injury and these basically outweighed Chelsea’s absences, namely Didier Drogba and Michael Essien. The goal was something which we have never seen before though, and we are unlikely to see another like it. A mistake by Petr Cech gifted William Gallas the only goal of the game. 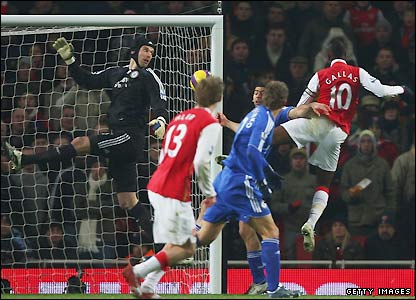 Probably on the whole though Chelsea deserved more out of the game. The first half saw Manuel Almunia earn his wages, a deflected Wright-Phillips shot and a Shevchenko thunderbolt being his highlights. Chances it seemed though were to be at a premium, but this was made up for with the aforementioned battle. Ashley Cole set the tone, and Emmanuel Adebayor kindly returned the favour to the ex-Gunner. Terry was booked for a reckless lunge at Cesc, and was later hauled off with a suspected ligament injury, caused by the always-feisty Eboue. The goal should have been routine catching practice for Cech though, not Fabregas’ best ball in, but he made a mistake which would offend many U13 ‘keepers if you called it ‘schoolboy’. Enter Gallas, former Chelsea hero, now Arsenal captain, to score his 3rd of the season.

The second half saw Avram Grant look to go and equalise and eventually kill the game. Off came Claude Makelele, on came Claudio Pizarro. Chelsea then kicked on. John Obi Mikel stung Almunia’s fingertips, and from around 60 minutes, the ball was exclusively in Arsenal territory. The tenacity and tough-tackles continued however, the most notable being Joe Cole on Eboue, which saw the Ivorian stretchered off. The last 10 minutes were excellent though. Robin van Persie was introduced and put the ball in the net only to be denied by the linesman. Andrei Shevchenko again gave Almunia something to think about, firstly by dispatching a free header towards the bottom corner, and also a rocket free-kick. The header was a chance which he should have done better from though. Then Cesc should have scored right at the death, but he instead decided to start a mass brawl.

To sum up then; both sides had their chances, both sides gave a good account of themselves, and the game was far more entertaining than the one at Anfield. Its difficult to say where the match was won and lost though, maybe you could say Chelsea’s inability to convert chances, maybe you could say that Chelsea defended poorly at points, it was just a really even game and I wouldn’t have complained if Chelsea had equalised.

Man of the Match — Probably Gael Clichy. He broke forward well, defended well, good performance by him on the whole, but no-one really stood out.

Air your views about Grand Slam Sunday below then, all are welcome. From Manic Mancs to Blue Blues, let’s hear you…