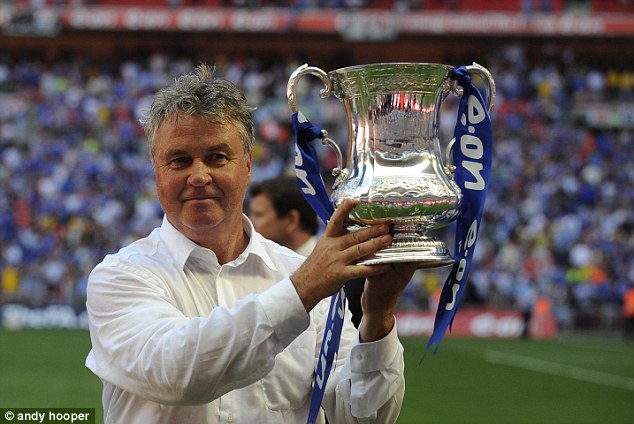 It was being speculated for a long time but when Jose Mourinho’s sacking did finally happen yesterday, it came as a brutal shock to one and all. Even though Chelsea’s performances and results this season have been unbelievably poor this season, showing the door to arguably the greatest manager in world football has left the footballing world divided on the issue. If Jose can’t get the Blues out of this current mess, then who can?

But the fact of the matter is that he’s gone, and Chelsea must now look forward. The most obvious option will be to have a caretaker until the end of the current campaign before employing a top name in the summer on a permanent basis. The frontrunner for the caretaker’s post according to Sky Sports  is Guus Hiddink, who also did a similar job at Stamford Bridge in the latter half of the 2008/09 season.

Here we look at 3 reasons at why the Dutchman is the perfect man for the job:

1) Been there, done that

Hiddink replaced Luiz Felipe Scolari at Chelsea in February 2009 and oversaw a successful second half of the season. He was loved by the players and fans alike and guided the Blues to a 3rd placed finish in the league. The team lost just once in 11 Premier League games under their interim boss. They also won the FA Cup and reached the semi-finals of the Champions League, where they were undone by Barcelona thanks to a very questionable performance against them by referee Tom Henning Ovrebo. He knows what it takes to achieve success with this club on a temporary basis and will be the right man to stabilise the situation at the moment.

The commitment and character of many of the senior Chelsea players has come under question this season, as a result of a possible discord between them and Mourinho. Hiddink, at 69, has had a lot of experience with managing top names in the game and will be able to quell any sort of mutiny within the dressing room.

He also had a very good relationship with the likes of Frank Lampard, John Terry and Didier Drogba during his stint in 2009 and was able to get the best out of them on the pitch. The other available candidates for the temporary job include the likes of Juande Ramos, Brendan Rodgers, David Moyes and Garry Monk. None of these names will set the pulses racing among the Chelsea fans, who are almost sure to express their fierce displeasure at the Mourinho sacking this Saturday at Stamford Bridge in the game against Sunderland.

Hiddink was a loved figure in West London, and will be a calming presence to everyone associated with the club. He may not be an upgrade on Mourinho, but is certainly the best of the rest when it comes to the options available.