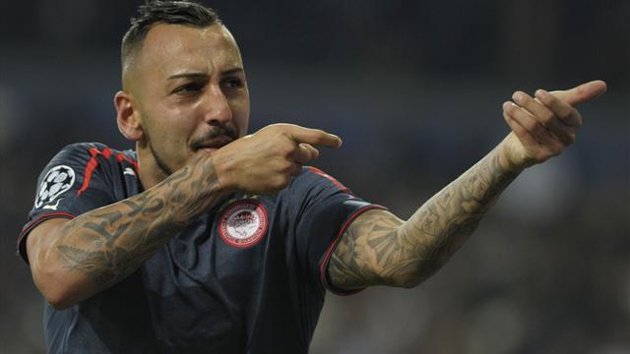 Arsenal and Liverpool suffered a serious transfer blow as one of their reported transfer targets Kostas Mitroglou has extended his contract with Olympiacos, while his new deal eliminates his €8 million release clause.

The Greek striker created a sensation in Europe this season after scoring 21 goals in 21 games for both club and country. His €8m release clause made him particularly attractive to suitors, but now top clubs will have to splash the cash to any amount that Olympiacos will demand.

“I’m really happy that I renew once again with the team that belongs in my heart,” said Mitroglou, as quoted by Eurosport.

“I want to thank the club and the president Vangelis Marinakis who have always believed in me even at times when my career was not progressing as I dreamed.

“I will give everything in training and in matches to try and make our fans happy.

“Olympiacos is a family and we all struggle for the red and white. We are all proud of this team and we will give everything to produce more glory the club.”

Arsenal and Liverpool both were linked with the player on several occasions in the last few months. The Gunners are looking to sign a good striker in the January transfer window to ease off the burden from the shoulders of Olivier Giroud.

Liverpool strike duo Daniel Sturridge and Luis Suarez has been firing cylinders in the league, but Rodgers may look to add another striker to bolster the attacking department.

As a result of the new deal, Mitroglou’s contract is extended till 2017 while his salary jump from €600,000-a-year to €1million. The Greek side are 10 points clear at the top of the Greek Super League table while will face Manchester United in the round of 16 knock out phase of the Champions League.