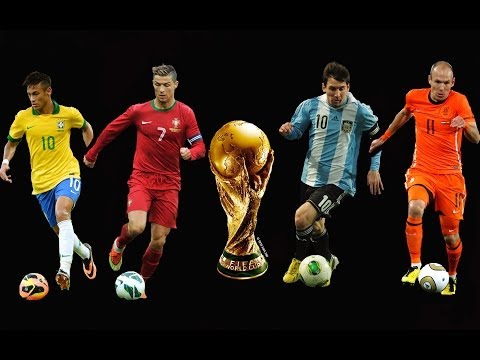 This is the first in a series of European player rankings that will cover each position on the pitch. Each player is assigned to a position based on their natural propensity and where they were deployed this past season, with more weight given to the latter.

Many football fans and pundits around the world are still fascinated with the ability of teams to dominate the spine of a pitch, but more and more teams in today’s game have achieved success at the highest level by stretching the field and finding joy down the flanks.

Modern wingers have loads of pace and athleticism, but the ones who are making a difference in key moments are the ones with the technical quality of a central midfielder and the upfield awareness of a striker. Many of the top attackers have started moving out wide to give themselves more room to operate with, and that phenomenon is evidenced by the quality at the top of this list.

Leaving out young talents like Bolasie and Herrmann was difficult, but that is how impressed I was by this 25-year old Spaniard. His running and vision in transition is remarkable, and his link-up play down the right with Aleix Vidal throughout the Europa League was mesmerizing, and he was a key factor in his team securing a group stage place in next year’s Champions League.

Mertens was not a lock for Rafa Benitez’s starting XI this season, but that does not fall on the Belgian’s shoulders. He was given a remarkable 7.51 rating by WhoScored this season as a starter, one of the best ratings among all European wingers. Why he did not play more is beyond me, but he was instrumental in Napoli’s run to the semifinals of the Europa League with 4 goals while adding 6 goals and 7 assists in Serie A, a solid return.

Manuel Pellegrini’s refusal to play him in the same spot of the pitch hurt Milner’s ability to perform at the Etihad this season, but there is no doubt that the Englishman possesses plenty of quality. He was still able to complete a key pass—one that leads to a clear scoring chance—once every 34 minutes in the Premier League, an impressive statistic. He will be given a new lease on things given his reported move to Liverpool.

A downright impressive campaign in Galicia has reportedly led Nolito to garner interest from clubs like Valencia, Atletico Madrid, Everton, and Napoli this summer. His 13 goals and 13 assists in La Liga even earned him his first Spanish senior team cap in November, and his prolific output combined with relatively fresh legs for a 28-year old will make him a force in Europe for years to come.

Acquired from Salzburg at the very beginning of the season, Mane took time to settle at St. Mary’s but finished off the season flying high. His 176-second hat trick against Aston Villa was just a glimpse of what this lightning-quick, agile winger can do to Premier League defenses, and a little more consistency would make him an integral part of Ronald Koeman’s side going forward.

The first of two Lazio men on this list, Candreva’s 11 goals and 9 assists helped lead the capital club to Champions League qualification and the Coppa Italia final. He provided good service into Miroslav Klose and was never shy to cut inside and finish a move off himself.

Set to leave Les Phocéens, Ayew will likely be one of the most sought-after players this summer considering he is available on a free transfer. The Ghanaian can play both wing spots and brings loads of pace along with superb technical quality. He was one of the catalysts behind Marseille’s temporary run to the top of France with 10 goals and 3 assists in Ligue 1.

Sterling’s torrid run of form throughout his protracted contract saga leaves a sour taste in the mouth of Liverpool fans, but he was vital to the team’s incredible dart up the table after New Year’s. The youngster was played at center-forward and even wing-back but did so with minimal fuss, averaging 2.9 dribbles and 2.1 key passes per game with 7 goals and 7 assists in the league. He is mesmerizing with the ball at his feet and has increasingly mature awareness, but it would behoove him to improve his finishing sooner rather than later.

A tough transition from Serie A to the Premier League hurt his stock in this list, but his blazing speed, physicality, and passing ability still make him a handful to defend. If if Chelsea use him the right way, he will return to the form that saw him average 5.1 drawn fouls, 2.5 successful take-ons, and 2.1 key passes per game for Fiorentina.

Fitness problems keep this young Brazilian out of the top 15, but when he was available, he showed France and the rest of Europe why he has the potential to be a top-class wide player. His combination of pace, flair, and technical skill are difficult for even the best fullbacks to deal with, part of the reason he earned a gaudy 7.47 overall rating from WhoScored.

Affectionately called “little brother” by Neymar last year, Anderson has flown under the radar throughout Europe despite having a standout season in Rome. He registered 11 goals and 9 assists playing an almost identical position as Neymar (left wing of a front three). He was a nightmare for would-be tacklers to deal with—3.3 successful take ons per game—as he spearheaded Lazio’s formidable attack.

Bellarabi took a big step forward this season under Roger Schmidt, recording 12 goals and 9 assists. His quick feet and technique bamboozled Bundesliga defenders to the tune of 4.7 successful dribbles per game, and his ability to win balls back and quickly launch counters separates him from many forwards. One knock on the German is that his finishing is not quite where it needs to be.

When Louis van Gaal finally settled on playing Ashley Young at his favored left wing spot in a 4-3-3, he thrived. He was arguably United’s best player over the final three months; his link-up play with Daley Blind down the left was wonderful and his pinpoint crosses wreaked havoc inside the box. His resurgence was capped by a Man of the Match display in April’s Manchester Derby, where he recorded a goal and two assists in a 4-2 win.

The Brazilian has as much technical quality as any player on this list, and if it were not for an inconsistent final product, whether it be a pass or shot—as evidenced by only 4 goals and 5 assists this season across all competitions—he could be even higher. Willian’s pace down the right makes it tough on any full back and he has developed into one of Europe’s top wingers defensively.

A nightmarish Spring is what most people will remember about Di Maria’s first campaign in Manchester, but his incredible start to the season should not be forgotten. Even though he struggled to fit into Louis van Gaal’s plans, the Argentine still managed 11 assists in 32 total appearances (24 starts), a decent enough return. Hopefully a more stable formation and philosophy will allow him to regain his top form next season.

The Dutch phenom’s brilliant season in the Eredivisie earned him a move to Old Trafford this summer, and he certainly deserved it with 28 goals across all competitions this season. Despite being a more natural provider than finisher, as evidenced by his service into Van Persie and Huntelaar for the Netherlands, he displayed the kind of killer instinct this season that will hopefully make him a star for years to come.

Injuries and a poor patch of form limited this dynamic winger to just 11 goals and 6 assists for his hometown club this year, but there is no doubt he remains one of the Bundesliga’s, if not Europe’s, top forwards. His chemistry with Pierre-Emerick Aubameyang developed throughout the year and Dortmund was clearly less incisive without Reus on the pitch.

Like his wing partner, Ribery struggled with injuries, but when healthy he remained one of Bayern’s best creators. He completed a key pass every 42 minutes (per WhoScored) and compiled 9 goals and 7 assists in just 23 appearances. His prowess with the ball at his feet is still world class, and the width he provided to Bayern’s attack was invaluable.

Bale endured a very difficult campaign at the Bernabeu this season, scoring only 17 goals in 48 appearances. His creative prowess—2.1 successful dribbles and 1.6 key passes per game—was evident, but he struggled to put chances away in front of goal. He is still one of the top wide players in the world, and all the Welshman needs is a boost of confidence this summer.

Sanchez wholly justified his sizable transfer fee this season in North London, helping the Gunners stay afloat during a difficult Fall and then acting as the catalyst for their Champions League qualification and FA Cup trophy. His 25 goals were important, but his 2.2 key passes per game reveal his creative ability as well.

Hazard was Chelsea’s rock throughout the season, so much so that he was voted the PFA Player of the Year, quite an honor for the 24-year old. Scoring 19 goals was a nice bonus, but it was Hazard’s tantalizing footwork—5.2 successful dribbles per game—and incisive passing (11 total assists) that helped the Blues unlock stubborn English defenses on their march to a domestic double. The Belgian is on the cusp of greatness.

After carrying Brazil to the World Cup semifinals and suffering a crushing back injury, Neymar could have been excused for allowing fatigue to affect his club form. Instead, he showed why Barcelona paid such a high fee to acquire his services, scoring 39 goals across all competitions as he meshed perfectly with Messi and Suarez. He still has a few areas of his game to improve, like his vision in the final third, but he looks likely to fill Messi’s shoes as the world’s best player sooner rather than later.

The Flying Dutchman’s injury-laden Spring derailed Bayern’s chances at the treble, with the Bavarians missing his spark and dazzling left foot against Barcelona and Dortmund in both cup semifinals. He was on course to be the Bundesliga’s top scorer with 17 goals in 21 games before the injuries hit. Even at 31, Robben is still one of Europe’s elite attackers.

He may not be as prolific as he was once as a creator (as evidenced by a dip in his successful dribbles, key passes, and foul-drawing statistics), but the Portuguese attacker still has the sharpest eye for goal in the world. He scored 61 total goals, including 48 in La Liga on his way to the Pichichi. He unilaterally saved Real Madrid multiple times, most notably against Schalke in the Champions League round of 16 and against Sevilla in a late-season league match. 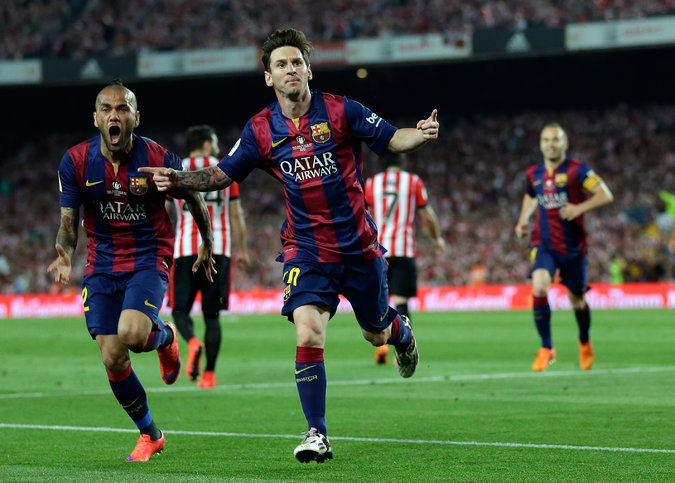 There are no adjectives left to describe this magician. He is top 10 in Europe in goals, assists, key passes per game, and successful dribbles per game, the only player who can claim that. He has added a more consistent right foot to his finishing repertoire while continuing to (somehow) improve his link-up play with teammates and ball retention statistics. His 58 goals and 29 assists across all competitions do not even do justice to his Ballon d’Or-worthy campaign.