A look at this weekend’s Premier League matches as Manchester fights for the league title and London teams play for their Champions League futures.

The chase for third place remains in Arsenal’s hands, but with Tottenham and Newcastle in close pursuit there is no room for error. Arsene Wenger’s team, without a win in three games, have laboured since Mikel Arteta’s injury removed the metronome which keeps everything ticking, and the responsibility to drag them over the line rests with a tired Robin van Persie. With Norwich having relaxed since securing a second season in the EPL, this is a good opportunity for the Gunners to grab a much needed victory.

Norwich have conceded 11 goals in their last three matches, including hat-tricks for Carlos Tevez and Luis Suarez. Van Persie will be hoping the Canaries defence continues to be accommodating. The Gunners are fortunate to close out the season with two imminently winnable games against teams without anything tangible to play for, but the spoiler factor should never be underestimated.

The sums are simple for Manchester City now: win their last two games and the title is all but guaranteed. It is a difficult assignment though, as Newcastle confirmed with their midweek victory at Chelsea. Of all the important games being played this weekend, this one might have the widest-reaching effects. Newcastle will need to pick up the points if they hope to lay claim to a Champions League place.

Manchester City did what they needed to do against their crosstown rivals on Monday, but with United facing a slightly less daunting end of the season schedule they’ll be able to take nothing for granted. On top of this, these are two very good teams that are generally quite enjoyable to watch. Both have incredible attacking talent with the likes of Papiss Cisse, Sergio Aguero, Demba Ba and Carlos Tevez. This is arguably the weekend’s biggest game, in any league.

This is a huge match for both clubs. An Aston Villa win in this match would all but guarantee their Premier League survival. However, Tottenham are well in the race for the Champions League places, Redknapp will be anxious to take third from their London rivals Arsenal, just in case Chelsea are successful in the Champions League final. Tottenham travel to Villa Park after back-to-back victories, while Mcleish’s side have failed to take 3 points from a Premier League game since November. Scott Parker’s return to fitness is a huge boost for Tottenham, having recovered from an ankle injury. He is expected to return to the starting line up in this fixture.

Roy Hodgson’s West Brom now have very little left to play for this season. However, this can’t be said for their opponents, Bolton. It’s been a very emotional season for Owen Coyle’s team, both on and off the pitch. For quite some time now, Bolton fans have been clinging to their side’s games in hand to give them hope for another season in the Premier League. The Wanderers caught up to the rest of the league in terms of games played on Wednesday, but faced a heavy 4-1 defeat to Tottenham. Bolton are even on points with 17th place QPR, but they’ve got a serious mountain to climb in terms of goal difference. Hodgson’s appointment as the new England boss may prove a blessing in disguise for Bolton. A distracted West Brom side could prove ideal opposition.

Both Fulham and Sunderland will be looking for the three points that would virtually guarantee a top-10 finish but the form of these teams could not be more different. The hosts have taken 13 points from their last six Premier League games, including a first ever win at Anfield in midweek. By contrast, Martin O’Neill’s side have not had a victory since 24 March and are playing very much like a side with one eye on their summer holidays.

QPR’s fortunes took a turn for the worst last season as they suffered a 6-1 loss to London rivals Chelsea. However, luckily for Mark Hughes’ side, other results at the bottom of the table ensured they sit one place above the relegation zone with just two games left. With a very tough last game against current leaders Manchester City, QPR really need 3 points from this home match to achieve survival, beating a tired Stoke on Sunday could be sufficient to keep them up.

These teams will be playing for different types of pride this weekend. Everton can open up a six-point gap over local rivals Liverpool, while Wolves – who are already relegated – can secure their first win under Terry Connor’s leadership. Connor will make a late decision on whether Matt Jarvis (groin) and Kevin Foley (hamstring) are fit to play. Moyes is hopeful Leighton Baines will return for the final game of 2011-12 but he will sit out this weekend’s match, along with Victor Anichebe, while Jack Rodwell is out until next season.

United’s hope this season now heavily rely with Newcastle and QPR. A Newcastle victory against the current league leaders would put United back into the driving seat assuming Ferguson’s team can take 3 points from this fixture. Failing that, United need a huge number of goals in their remaining two games if they hope to win the title. Expect a high scoring match, as the hosts attempt to close the goal difference gap with City. Although Swansea have had an excellent season, their form has faded of late, with just a single victory for Brendan Rodger’s side.

This is, undeniably, the last chance for Blackburn to save themselves from the drop. The Monday night shift has not generally proved popular with clubs or supporters this season, but neither Blackburn nor Wigan will be complaining this week. By kick-off at Ewood Park they will know the fortunes of Bolton, QPR and Aston Villa, and Wigan could need only a point to ensure they stay up. Whatever their rivals muster, Rovers – who are away at Chelsea on the final day – realistically must win this one, and hope that Wigan return to their meek early-season form rather than continue their recent heroics.

Liverpool-Chelsea, twice in the space of three days. There’s no doubt the importance of this match is negligible compared to Saturday’s FA Cup Final. Liverpool have already secured a European place through their Carling Cup victory earlier in the season and of late their league form has been extremely poor, now they only have their own pride to play for. Chelsea, on the other hand, are still chasing Champions League football next season. If they fail to beat Bayern Munich in May’s final, then they have to ensure a fourth place league finish to ensure playing in the elite continental competition next season. Clearly, Di Matteo’s side still need as many league points as possible. 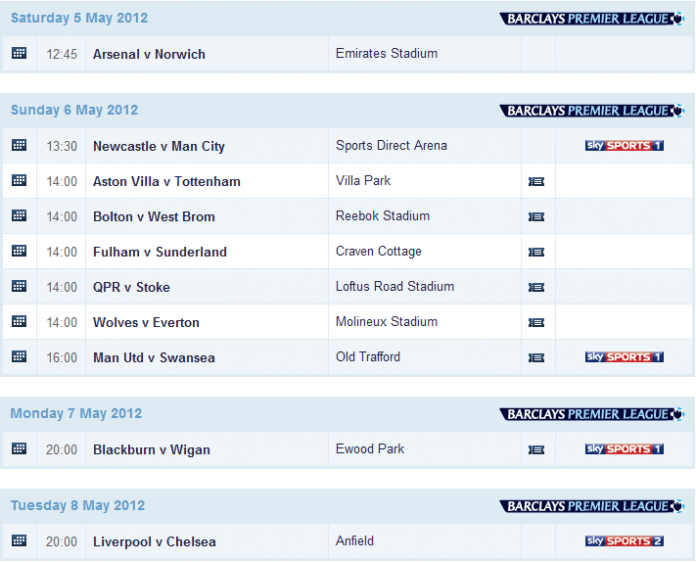