With now only 8 teams remaining in each respective tournament, UEFA’s headquarters in Nyon (Switzerland) will host the draws on Friday afternoon for the Quarter-Finals and Semi-Finals of the 2007/08 UEFA club competitions, the UEFA Champions League and the UEFA Cup.

The UEFA Champions League draw will be made at 12.00CET and conducted by the UEFA General Secretary (David Taylor) and the ambassador for the May 27th final in Rome (AS Roma and Azzurri legend Bruno Conti). The UEFA Cup draw will follow at 13.00CET and will be conducted by Mr Taylor and the ambassador for the Istanbul final, former football AND basketball international (yup, you’ve read that right, he’s the Turkish Steve Nash) Can Bartu.

Soccerlens brought to you the draw LIVE as each of the 4 UEFA Champions League and UEFA Cup matches were drawn. Full tables after the jump.
. 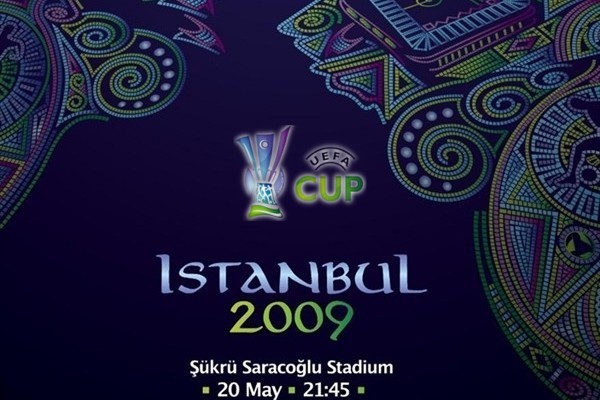 13:16 And this wraps it up for us. Thanks for tuning in to Soccerlens to follow the liveblog. See you very soon in April for the Quarter-finals!

13:16 Fairly balanced draw overall, I’d say. The most interesting match (at least as far as I’m concerned), will be Udinese-W.Bremen, but obviously I’m biased, and hoping at least one Serie A team will keep the Italian honour high in Europe this season. The two Franco-Ukrainian showdowns are definitely interesting as well.

Thus, it could be a fully German and a fully French or Ukrainian semi-finals.

13:12 WERDER BREMEN vs. UDINESE. So Udinese now have the opportunity to avenge their Serie A cousins Milan, and take Werder out. It’ll be a hard one for Marino’s boys, no doubt.

13:12 SHAKHTAR DONETSK vs. MARSEILLE. It’ll be a double Franco-Ukrainian header then!

13:11 PARIS ST. GERMAIN vs. DYNAMO KIEV. Good draw for the Parisians, who are having quite an admirable Ligue 1 season so far, sitting very close to Lyon.

13:10 HAMBURG vs. MANCHESTER CITY. I think Mark Hughes will be pleased…

13:06 Presenting the city of Istanbul, as well as Can Bartu, UEFA ambassador for the Cup final. Picture it, this is a guy that represented Turkey at the international level for both football and… basketball! I wonder if he can he play hockey too (Steve Nash anyone?).

13:02 Cue the Round of 16 Highlights video, along with a presentation of the 8 qualified teams. Some nice images of Istanbul, the city that will be hosting the final.

13:00 David Taylor doing his thing again. Presenting the road to the quarter-finals.

12:59 And we’re back. Now listening to an endless loop of “UEFA Cup theme music”. Wonder if they’ll get it changed once it turns into the “Europa Cup”. 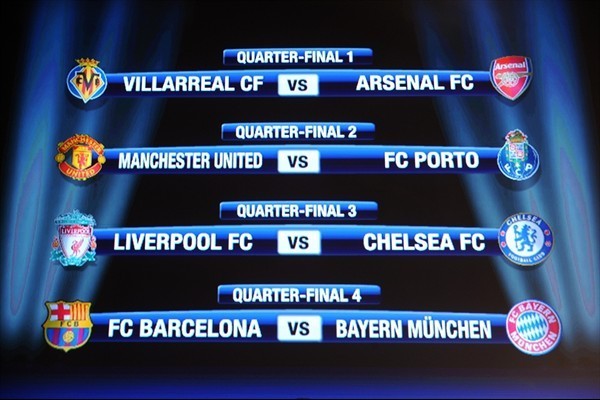 12:14 Boy oh boy, this is interesting. Man Utd may have gotten a tough opponent in the Round of 16, but surely beating Porto must seem like a walk in the park after beating Inter? And how about that L’pool vs. Chelsea showdown? The semi-finalists from the 2007-08 edition meet again. Can Blues beat Reds once again? We will find out in April!

12:13 Man Utd/Porto vs. Villarreal/Arsenal
Barcelona/Bayern vs. Liverpool/Chelsea. The finalist coming out from the second game will definitely have it harder.

12:11 And thus, the only two teams remaining: BARCELONA vs. BAYERN MUNICH!!! Another great one!

12:06 Presenting Bruno Conti, the UEFA ambassador for the Champions League final. This is one of the greatest players to ever don the Roma and Italy jersey my friends, and a 1982 World Cup winner with the Azzurri. Arguably, also the best left winger ever to play for Italy.

12:04 Video presenting the teams being shown. Liverpool have now won 4 straight matches in the UCL, Chelsea beat Juve, Messi beat Lyon etc. etc. Some good footage of the Stadio Olimpico though, where the final will be played.

12:01 David Taylor is on, and presenting the “road to the quarter-finals”. Giving stats about teams and stuff. Yawn. That’s why they make UEFA press kits people!

12:00 And so it begins. Prepare for the EPL vs. EPL showdown people: it’s happening!

11:59 Should begin any minute now. It better. If I hear the Champions League theme song one more time I’m throwing the monitor out the window.

The eight winners of the ties played in the first knockout round of the UEFA Champions League will contest the Quarter—Finals, with the pairings determined by an open draw. This means no country protection: clubs from the same national association may be drawn against each other, and in the case of the English Premier League (who still has 4 teams left in the competition), the odds of that happening are… very high (if you’re interested to know how high, read this). Prepare yourselves for some very hot April action!

The quarter-finals are played on a home-and—away basis, with the first legs scheduled for Tuesday 7th and Wednesday April 8th and the return legs for Tuesday 14th and Wednesday April 15th. The four winning teams will, at that stage, know who they will meet in the Semi-Finals (to be played just two weeks later, on April 28/29 and May 5/6), as the pairings will also be decided during the draw ceremony.

The same procedure will apply to the draw for the Quarter-Finals and Semi-Finals of the UEFA Cup. The Quarter-Final matches will take place on April 9 and 16, and the Semi-Finals on April 30 and May 7. The final will be played at the Fenerbahçe Åžükrü SaracoÄŸlu Stadium in Istanbul on Wednesday May 20 at 21:45 local time (20.45 CET).
.
.
.
.
.

While the possible draw scenarios germinate in your mind, L’Ã‰quipe has a rather interesting article on the “home advantage” factor of the remaining teams.

Ironically, Barcelona are the team who have the weakest home record of the remaining eight, but hey… who needs a solid defense when you usually score more than three goals per game, mmmh??
.

(and in the meantime, have a look at the cool adidas “Roma Finale” ball for the Champions League final):
.