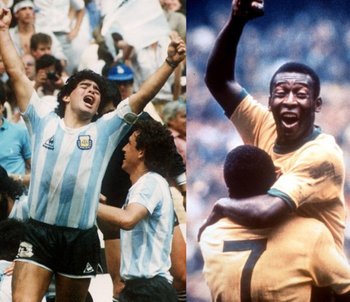 Which is weird. Because for all the debate about who was better and all the harsh words exchanged (and there have definitely been some harsh words) these men never met on the field, and their careers only overlapped at the very edges. In 1977, a 37-year-old Pele was finishing his playing career with the New York Cosmos while a 16-year-old Diego Maradona was just starting out with Argentinos Juniors. They didn’t even play the same position. 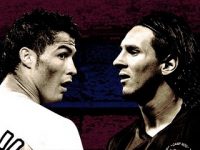 They will come face to face (injury and suspension permitting) at least twice a year, and in between those games they’re already engaged is a sort of endless shootout, registering almost comical numbers of goals against La Liga’s lesser lights.

You could argue they represent different things. Ronaldo the arrogant big money signing always looking to do something flash, Messi the humble homegrown talent happy to submit himself to the team ethic. But why bother creating a false mythology when over the coming seasons we’re hopefully going to witness two players inspire each other to greatness, taking it in turns to raise the bar and then raise it again. When it’s all over, we could be looking back on the greatest player vs. player rivalry of all time.

But the question that still remains unanswered is: If England can only pick one, who should it be?

The three highest scorers in Bundesliga history are Gerd Müller with 365, Klaus Fischer with 268 and Jupp Heynckes with 220. Great stats, but what makes it all the more amazing is that Müller, Fischer and Heynckes all played in the Bundesliga at the same time, specifically from the late 1960s through to the end of the 1970s. That’s what you call a shootout.

Bayern Munich striker Müller was the clear victor in this three-way rivalry, finishing as Bundesliga top scorer a remarkable four times and sharing the honour three times. But throughout that period Fischer was scoring constantly for 1860 München and Schalke 04, as was Heynckes for Hannover 96 and Borrusia Mönchengladbach, either breathing down Müller’s neck or even outscoring him, as Heynckes did in 1975 and Fischer did in 1976.

When two competitors like this square-up, you know it’s going to get tasty, with battles on the pitch, fights in the tunnel, and Keane’s legendary line of pre-match questioning: “If you love Senegal so much, why don’t you go play for them?”

While Keane and Vieira were seeing who could shout the loudest and who could kick each other the hardest, Ruud van Nistelrooy and Thierry Henry were busy scoring goals. The first few seasons of the new millennium were all about which of these two strikers could fire their team to victory. RvN with his positioning, power and ruthless finishing, or TH14 with his lightning pace and ability to beat a keeper one one one.

Both men won titles and both scored ridiculous numbers of goals, each pushed a little harder by the other. Van Nistelrooy scored 44 in all competitions in 2002/3, while Henry replied with 39 the next season as Arsenal won the Premier League unbeaten. In a nice little parallel, the two moved to Spain within a season of each other, van Nistelrooy to Real Madrid in 2006 followed by Henry to Barcelona in 2007.

With all due respect to Petr Cech and others, these are the two great goalkeepers of the modern era. Men who’ve maintained the highest standards for club and country, and produced save after save after save.

Casillas now has the superior medal collection after equaling Buffon’s World Cup win in 2010, but also having two Champions League and a European Championship winners medal to polish as well. But Buffon is still a Serie A and World Cup winner, and may have even more medals had he not shown impeccable loyalty to Juventus after their court-ordered relegation in 2006.

So how do we choose? How about we don’t, and just honour Buffon and Casillas as the two greatest goalkeepers of the modern era instead. 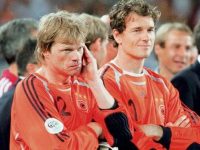 Though similar in age (Kahn is just five months older) Lehmann was long Kahn’s understudy for the German national team. And this was fine with everyone because Kahn was outstanding, especially at the 2002 World Cup, where he captained the team to second place. But when Juergen Klinsmann took over as Germany coach in 2004, he relieved Kahn of the armband and announced that Kahn and Lehmann would be competing for the #1 jersey when Germany hosted World Cup 2006. Kahn was not amused.

The two men sniped as they passed the jersey back and forth, with Lehmann eventually emerging victorious by a narrow margin. There was brief harmony during the World Cup when Lehmann famously won a penalty shootout for Germany, and praise from Kahn, and a nice moment when Kahn played for the final time and captained the team in the third place playoff. But verbal hostilities resumed soon after World Cup 2006 with Lehmann saying Kahn takes himself far too seriously and Kahn mocking Lehmann for losing his Arsenal shirt to Manuel Almunia. Long may it continue.

The Messi and Ronaldo of their day. Around the middle of the 2000s, Ronaldinho and Zidane were the playmakers for Barcelona and Real Madrid respectively. Both were masters of the unexpected, but there was never any animosity between the two, mostly because Zidane was an old bald man nearing retirement while Ronaldinho was a smiling buck-toothed innocent who liked to dance.

But this rivalry makes the list because in early 2005 someone invented YouTube, which meant that everyone in the internet-connected world was legally obliged to make a Ronaldinho vs. Zidane compilation video (preferably set to music) so that we could all compare the two men’s audacious flicks and tricks side by side in a series of pixelated showcases. Who was better? Who cares! Just click play and enjoy.

The two grand old #10s of Italian football. Two men who have become symbols of the teams they’ve served for nearly two decades. Del Piero at Juventus and Francesco Totti at Roma. Both men hold the records for appearances and goals scored for their respective teams. Fans of those two clubs will argue about which player is better until the end of time, but the players themselves seem content to bask in some mutual appreciation. Here’s what Del Piero had to say about Totti before a game in early 2010:

With Francesco we have been teammates on the national team. I emphasize teammates and not rivals. We are very different, but we have many things in common. We won the World Cup together and those memories will bind us forever. But above all with our clubs we have been, and will be, adversaries. I think that a champion becomes great due to the great opponents he faces. For this I will be happy, tomorrow night (Saturday), to shake the hand of Francesco.