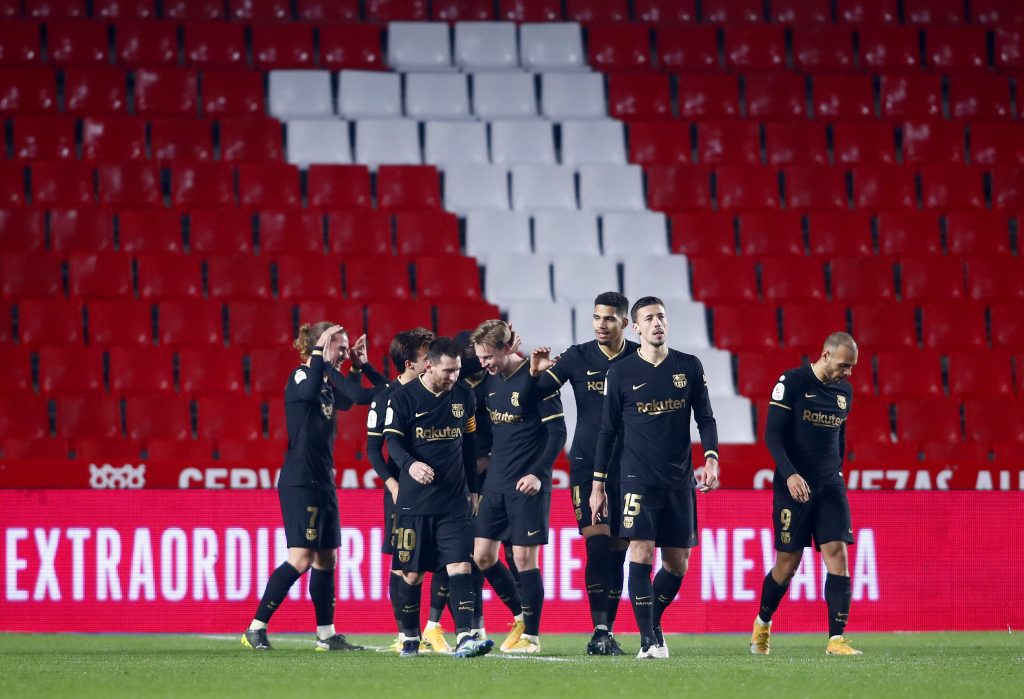 On Wednesday night, Barcelona qualified for the semi-finals of the Copa del Rey with a show-stopping 5-3 victory away at Granada after extra time.

Things didn’t start well for the Blaugrana, going into half time 1-0 down due to Kenedy’s tap in, before Roberto Soldado made it two shortly after the break. However, late goals from Antoine Griezmann and Jordi Alba took it to extra-time.

Ronald Koeman’s side appeared to be in for a comfortable end when Griezmann bagged his second, but they were pegged back by Fede Vico’s penalty.

But they eventually emerged victorious, with Frenkie de Jong converting a rebound from Lionel Messi’s shot, before Alba netted a second with a thunderous volley.

Here are five things to take away from the game.

Scoring five goals is a great achievement no matter who you’re playing. And it becomes even more impressive when you consider that Barcelona also hit the woodwork three times and were faced by an inspired Aaron Escandell in goal.

However, things at the other end were not so impressive. The first goal was nothing short of a defensive calamity, with Samuel Umtiti carelessly giving the ball away in his own penalty box, allowing Chelsea loanee Kenedy to tap home from about four yards out.

The second wasn’t much better. Roberto Soldado – a man not exactly blessed with pace – was allowed to go clean through on goal after the visitors had committed far too many men forward.

And, having turned the game on its head in extra time, they once again collapsed at the back. Young American Sergino Dest was this time the guilty party, bundling over Carlos Neva in the box to allow Fede Vico to equalise from the spot.

They may have been bailed out by the brilliant forwards this time, but Barcelona cannot afford to be this sloppy in defence in future.

Things haven’t gone smoothly for Griezmann at Barcelona. Having signed from Atletico Madrid for €120 million in 2019 in search of trophies, he is still yet to lift a piece of silverware at the Camp Nou. Meanwhile, his former club are on course to win the league title with ease.

His performances over the last year-and-a-half have not justified the price tag. However, in recent weeks, the French forward has upped his game, and has started to look like the eight-figure signing the fans hoped they were getting.

Wednesday night was arguably his best showing in a Barcelona shirt, scoring two and assisting another two. The World Cup winner now has 13 direct goal contributions in all competitions in 2021 – the most of any player from Europe’s top five leagues.

If he can keep this form up, then Griezmann may just be able to make himself a hero at the Camp Nou.

The growth of Frenkie de Jong

Frenkie de Jong arrived at Barcelona in 2019, off the back of several impressive performances for Ajax in the Champions League. Since then, he has shown a lot of promise, but hasn’t yet become the world-class midfielder expected of him.

One of the biggest criticisms of the Dutchman was his lack of attacking contribution. During his time under Ernesto Valverde and Quique Setien, he managed just two goals and three assists in all competitions.

However, compatriot Ronald Koeman has turned De Jong into far more of a direct goal threat. In his last nine appearances, the 23-year-old has scored five and assisted two.

While goalscoring isn’t his primary role and never has been, it’s good to see the midfielder developing that side of his game. If he can consistently perform to his current level, then he will no doubt have a wonderful career.

Scraping their way to the Copa del Rey?

Atletico were knocked out by Cornella in the second round, and Real Madrid were eliminated by Alcoyano in the round of 32. On paper, it should seem like Barcelona have a straightforward run to the Copa del Rey trophy.

However, it’s not been so comfortable. The Catalan giants narrowly defeated third-tier Cornella in the round of 32, needing extra time strikes from Ousmane Dembele and Martin Braithwaite to progress. This was followed by an unconvincing 2-1 victory over Rayo Vallecano, having been behind with 20 minutes remaining.

Wednesday night’s dramatic finish against Granada was another game that papers over the cracks for Barcelona. Sure, they’ve reached the semi-finals, but it’s been far from convincing.

The Copa del Rey is a huge opportunity for Ronald Koeman to register his first piece of silverware as Barcelona manager, and possibly keep himself in the job for another season. He must ensure that the performances are better in the coming rounds.

Messi is a good footballer. Who’d have thought?

Against Granada, the Argentine failed to score, and registered only one assist. On the surface, this seems like a fairly underwhelming night on an individual level. And yet, he still put in an exceptional performance.

Messi was heavily involved in three of Barcelona’s five goals. Firstly picking out Griezmann with a beautiful pass for their first, before playing an almost identical ball four minutes later, which Griezmann nodded across goal for Alba. And then it was his shot that was parried into the path of De Jong for his side’s fourth of the evening.

Furthermore, he had three other shots well saved, hit the inside of the post from the edge of the box, and had another cleared off the line, while creating TEN chances for teammates. In short, he did everything he could without scoring.

This is the truly terrifying thing about Lionel Messi. Even when he isn’t scoring, he is still a standout. He is arguably one of the best playmakers of all time. Factor in his 700+ career goals, and you have a once-in-a-lifetime player.