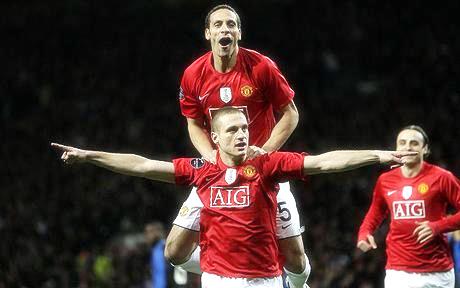 Once more, it’s a tale of Manchester United shooting themselves in the foot. Such talent oozing from the walls of Old Trafford, but thus far this season, United have failed to produce the desired results on the road. United are uncharacteristically chucking goals (and points) left and right and that worrying trend shows no sign of abating, given the result at Bolton.

Despite Chelsea’s loss over in the blue half of Manchester, they have proven themselves as the team to beat and if United are to recapture the League title, then they are going to have to sharpen their attack and shore up their leaky defence. Fortunately, there are tactics that would see both goals realized.

Sir Alex Ferguson has fancied the 4-4-2 setup thus far this season and why not? It’s tried and tested and has come through for him on an infinite number of occasions. However, in light of the problem at hand- that is, the matter of needlessly conceding goals- I recommend a slight change in system. That change would add stability to the team both going forward and when on the back foot.

Starting at the back, it would be wrong of me to pinpoint any one defender and say that he is not good at what he does. The reason for conceding as many goals as they have comes down to the making of needless errors. That said, although O’Shea and Evans are decent defenders, I feel that they have been a little suspect at the back of late.

Hopefully, a fit Rio Ferdinand will reunite with Nemanja Vidic and help cut down on the amount of errors made at the back. I’d like to see more of Smalling as well. I think of him as an English Pique. He is solid at the back and poses a genuine threat at set-pieces. He also has decent technical skill, unlike the average central defender. He also enjoys venturing forward looking for a decent pass to make. He certainly has a bright future ahead of him.

As for Right Back, Rafael and Wes Brown should be given an opportunity. Neville, when fit, does a good job as well. At Left Back, Evra is still trying to shake off the after-effects of the French debacle. Given time as well as the fact that he is one of the club’s most consistent players, I fully expect him to recapture his best form. Fabio lies in wait though.

As for holding midfield, Darren Fletcher certainly has to be in there. He lacks presence in my opinion, but his incredible work ethic and energetic approach to the game makes him ideal for this role. He is good in the tackle most times and can play the odd, decent pass up the field. His ideal partner in holding midfield is Owen Hargreaves, but I’m sure I don’t need to say anymore on that subject.

With Hargo out, I recommend that Darron Gibson be positioned there. I honestly don’t see Gibson as an Attacking Midfielder given he isn’t all that creative with the ball, unless he’s lashing it from 30 odd yards. I think he can be molded into a decent holding midfielder and of course, he can still test the ‘keeper when he makes the odd run from deep midfield.

I’m aware of Scholes’ incredible inability to tackle after all these years, but I’d use him as a partner for Fletcher as well. However, unlike Fletcher and Gibson, he won’t be there to tackle, he’d be there to help retain possession and to spray the ball around the field. He’s done that very well thus far this season, gaining plaudits from his manager, team-mates and others as a result.

Needless to say, Nani would occupy the right-hand side of attacking midfield. He is a growing influence on games and is finally fulfilling his true potential. The evergreen Giggs would occupy the left primarily, but given his recent injury, I expect that Park Ji-Sung would see more pitch time. Gabriel Obertan and Bebe can also play on the left-side of attacking midfield.

There are two decent options at Ferguson’s disposal when it comes to positioning someone “in the hole”. A newly fit Anderson can definitely play that role, while Wayne Rooney has looked accomplished there as well. Both players are able to drop back in order to provide support to the holding midfielders and would drive forward to provide quality service for the in-form Dimitar Berbatov, who in my opinion should be the lone striker up top, despite Owen staking an impressive claim of late.

I know that not many people would agree with dropping Rooney back, but taking him away from the focal point of the attack for the time being would take some of the huge pressure off of him so that he can rediscover his best form. His creative instinct is also phenomenal and would be brought to the fore in this role as opposed to him being and feeling pressured to score if he were up top. He impressed when he played a deeper role for England recently and I think that he would shine in a similar role for United. It is definitely worth shot in my opinion.

Given my recommendations, here is what I think United’s lineup should be (given the present fitness of players) – (4-2-3-1):

The season isn’t over yet. Hopefully, Manchester United can get up, dust themselves off and show the other 19 teams in the league their awesome might.