36 year old Alexandre da Silva Mariano, a.k.a. Amaral, is not one player that you would expect to be the (unofficially) most polite footballer.

Previously playing in footballing danger zones such as Italy (Parma; AC Fiorentina) and Turkey (Besiktas), representing Brazil 31 times, and winning an Olympic Bronze medal (Atlanta 1996), nobody anticipated that the former grave digger would have written a thank you note to his most recent club, Perth Glory.

The Glory’s fan favourite only played 8 matches in his first stint, mostly off the bench, with most of it ruled out due to a hamstring injury. After being released by Perth on the 2nd May 2009, he brought back his wealth of experience to Perth, signing onto a 9 match guest stint, despite only playing 3 matches. Amaral, understandably thanked the club for the second chance, but then, did something quite out of the ordinary. The fan favourite then turned to popular Australian sporting magazine ALPHA, and sent his fans and all A-League followers a message.

Just looking at this message, it really does seem sincere. How many former Brazilian international players take time out of their busy schedule to write a letter praising the growing A-League and Australian football scene? None, if I can remember, but we are all hoping that Carlos Hernandez will do the same. Amaral, from me, thank YOU, for showing me that football players are actually real people, and thank you also for your praise. Yes, you have contributed, not in some way, but a lot to the development to Australian football, and I hope that you will continue to play your best at your future clubs. 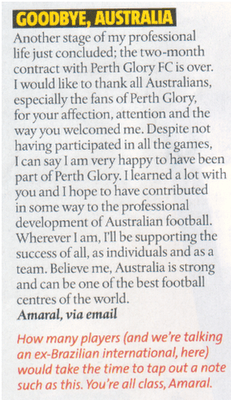 From me, at Soccerlens, Thank You Amaral, and as ALPHA put it, you’re all class!