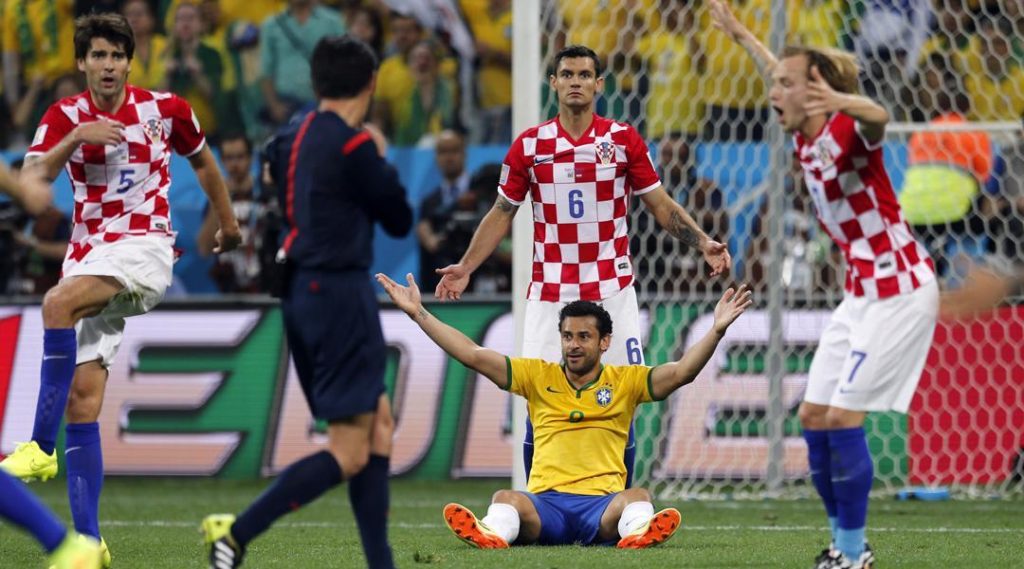 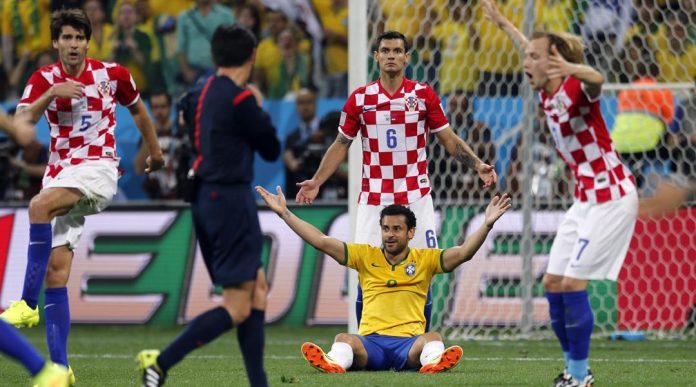 In the end, it was a case of what should have been.

In some ways, Brazil’s 3-1 win over Croatia in the opening match of the 2014 FIFA World Cup was wildly entertaining and exhilarating. But the final score-line left too much flattery and deception fluttering around the air in Sao Paulo. It was hard to swallow.

In the truth, Brazil never performed better than their they did in signing a spine-tingling rendition of their national anthem that left Julio Cesar wiping away tears and jaws dropped around the world.

But once the game kicked off, you felt something wasn’t right. And after three goals completed a rousing comeback, that feeling didn’t go away.

Neymar’s opening goal was a perfect mistake. His second from the spot should have been saved and was courtesy of an absolutely shocking penalty call. Oscar’s capping goal was a 20-yard toe poke. Add in an opening own-goal from Marcelo, and that’s how you get 3-1.

It all looked about right. But this wasn’t how Brazil wanted to start their home exorcism World Cup.

In truth, Croatia should have had a point – maybe even three. The penalty call against Dejan Lovren decided the game, and it was nothing short of a massive injustice.

Lovren had a hand on Fred’s shoulder, but it was an injustice. Said Croatian manager Niko Kovac, “It’s ridiculous… If we continue in this way, we will have a circus.”

He continued, “If that was a penalty, we should be playing basketball.”

Not that Croatia were faultless in their own unfortunate demise. Goalkeeper Stipe Pletikosa should have saved Neymar’s penalty, and Oscar and Neymar beat him with low shots from 20+ yards with some incredibly stiff and immobile play.

Croatia had their chances – including that they put into the back of the net but was scrubbed out for a questionable foul against Ivcia Olic on Julio Cesar.

Despite Brazil holding the ball, Croatia looked dangerous all night. Their first goal was the product of a well-worked counter and cross, and you have to wonder whether the Croats would have been even more of a threat if the suspended Mario Mandzukic were up top instead of the irritable and ineffective Nikica Jelevic.

Brazil gritted it out, but as a team playing with a furious sort of fire at home, they were surprisingly flat. Often lackadaisical in defense, Brazil was dominated in the stretch of the game when they scored two goals to win.

Of course, Brazil will improve. They’re going to look much better against Mexico and Cameroon than they did against Croatia, but they don’t have unlimited time to kick it into high gear. Spain, Chile, or the Netherlands waits in the Round of 16.

There were positives. Oscar was terrific. Things are certainly going right for Neymar, even if it wasn’t a vintage performance. Brazil is about as likable as a big favorite can be because of their togetherness and clear spirit. That all remains – as the Selecao’s connection to their countrymen.

On a broader scale, there’s a big strange vibe forming around this tournament. The Brazilians clearly love their team. But at the same time, they hate the way their country is being run – and the World Cup is the very visible lynchpin for that hate.

The morning protests in Sao Paulo brought out tear gas and rubber bullets. The afternoon brought the country to a halt to watch the game. And the evening saw widespread celebration.

It’s all very interesting, and the game mirrored the intrigue. It was nothing if not mind-bending.

As far as Japanese referee Yuichi Nishimura, he’s a very good ref who made a very bad call. No one will need to tell him that.

Brazil is the story here. But Croatia probably should have been.

If the Croats don’t let this loss eat them up, they’ll advance from this group and won’t break a sweat again until the knockout round.

Kovac’s suggestion that Croatia should, “give it up now and go home” if the refereeing becomes a pattern and his side isn’t shown any “respect,” is not the best way to start.

But the world did feel his anger.

Scolari, of course, defended the decision. He said, “I have seen it 10 times,” perhaps because that’s how long it took him to convince himself that his striker didn’t dive and win one of the softest penalties in recent World Cup history.

Good luck aside, Brazil simply have to get better. There was a disconnect between their passion and intensity in that rousing national anthem that they surprisingly didn’t carry over to the game.

It was, however, a great World Cup game in every sense. Shocking, controversial, exciting, dramatic, and it left people all over the world chattering away long after it was done.

Make no mistake: This was a great occasion in Sao Paulo. But it almost went very, very wrong, right up until it didn’t. Is that a good thing for Brazil? We’ll just have to see.