A very good day to you all, and welcome to the daily World Cup column here on Soccerlens.

It seems England may have a certain brand of beer to thank for the upturn in their World Cup fortunes after all.

Apparently coach Fabio Capello decided that the only way to get his team up and running was to allow them to have a skinful the night before the Slovenia game – and, you know what, it looked like it may have worked! (Can you imagine the resultant media sh*tstorm if it hadn’t?)

Here’s the best of this morning’s World Cup news…

At long last England stamped some sort of authority on the World Cup with a dominant, high-tempo performance that saw them register the deceptively narrow win they needed to see them progress through to the last 16.

After limp performances in their first two Group C games, England were under pressure to finally click into gear. Any lingering doubts were scotched early on as Fabio Capello ushered his side forward, tearing Slovenia apart with the kind of quick, dynamic passing that had been sorely lacking against the US and Algeria.

The deadlock was broken in the 22nd minute when James Milner whipped a dangerous cross into the six-yard box from wide on the right and Jermaine Defoe turned the ball in – thus marking his first World Cup start with a first World Cup goal.

The goal injected even more fervour into the England attack, who pinned Slovenia back into their own half for much of the opening 45 minutes and really should have added a second or third to their tally before the break.

Samir Handanovic put in an impressive shift in the Slovenian goal, producing some fine saves by blocking goal-bound efforts from Steven Gerrard and John Terry and by touching Wayne Rooney‘s scuffed shot onto the post from point-blank range.

As the second half wore on, Slovenia began to find their feet and first Terry, then Glen Johnson had to produce stout blocks to repel two quick-fire efforts from Milijvoje Novakovic before young striker Tim Matavz was denied a dramatic late equaliser due to a heroic last-ditch tackle by England centre-back Matthew Upson.

Wayne Rooney was taken off as a precautionary measure with twenty minutes to play after taking the striker took a knock to the ankle and was replaced by Joe Cole, who received a rapturous welcome upon his arrival.

The last fifteen minutes were tense for both teams.

Slovenia pressed forward as England merely looked to run down the clock, instead of putting the tie beyond doubt – however, some secure handling from David James coupled with some truly fantastic ball-retention work by James Milner saw Capello’s men hang on to their thoroughly-deserved three points.

USA succeeded where England had failed five days previous, by beating Algeria to book their place in the knock-out stages of the World Cup – despite being on the brink of elimination from the tournament for over 91 minutes.

Algeria were reduced to ten men late in the game when captain Anther Yahia was sent off for picking up a second caution, but the Desert Foxes had long since given up on playing for pride – knowing that even a win wouldn’t see them progress from the group stages.

Donovan’s goal was enough to push England into second place in the Group C standings on goal difference but, with the final Group D table still to have been finalised, it was unclear as to which side that favoured.

A dominant second half performance from Australia was enough to see that Serbia were knocked out of the World Cup, but unfortunately it couldn’t save the Socceroos from suffering the same fate.

A trademark bounding header from Tim Cahill (restored to the side after serving a one match ban) in the 69th minute and a long-range strike from Brett Holman just four minutes later buoyed Australia’s optimism and they piled forward in search of the two further goals they required to move above Ghana into second place in Group D.

However, as the final whistle loomed, Pim Verbeek‘s side saw their slim hopes of advancing to the last 16 effectively ended when Marko Pantelic reacted quickly to stab home, after Mark Schwarzer had fumbled Zoran Tosic‘s speculative effort, to pull a goal back for the Serbians.

In the end, both sides were left to rue poor results in earlier games – Australia, in particular, paying for their heavy 4-0 defeat to Germany in their opening game – as neither managed to make it past the group stage.

Joachim Loew‘s men set up a mouth-watering last 16 tie with England this coming Sunday, after managing to overcome Ghana in a thoroughly entertaining game in Johannesburg last night.

A beautiful strike from rising star Mesut Ozil was the difference between the two teams, the Werder Bremen midfielder lashing a half-volley past Richard Kingson from the edge of the area on the hour mark.

The pulsating match was open and expansive throughout, with Ghana wasting their fair share of opportunities to edge themselves in front and, after Ozil scored for Germany, pull themselves back level – with tournament top-scorer Asamoah Gyan going close on a couple of occasions when he perhaps should have made more of his chances.

Germany held on to their lead pragmatically with Bastian Schweinsteiger and Sami Khedira working tirelessly all night to screen their defense.

At the final whistle, there was still an air of uncertainty emanating from the Ghanaian camp as they waited for news from Nelspruit (Australia vs Serbia) to filter through – but the Black Stars soon realised that they had done enough to book their place in the knock-out phase. 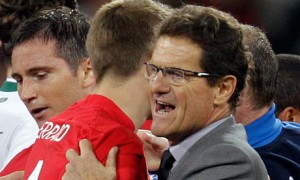 England Coach Fabio Capello has revealed the secret behind his side’s rejuvenation against Slovenia yesterday was to let players enjoy a pint or two the night before. How very English!

After lacklustre displays in their first two Group C games, Capello’s men finally came alive last night with a spirited performance in Port Elizabeth and the Italian gaffer was delighted with the manner in which his side rediscovered their enthusiasm;

“Yesterday evening they drank beer before the game and I saw the team play with the spirit that we lost in the games we played before this game. The performance was really good and we created a lot of chances to score a second goal.

This is the spirit that I remember when we played in the qualification games. I am really happy with the performance of the team.

We played hard, we attacked the ball and this is important if we want to win.”

If they play that well after a couple of jars, then I’d seriously consider letting them all get completely twangoed before the Germany game! 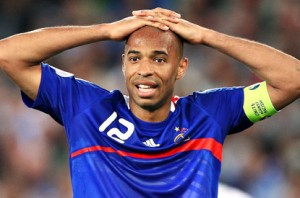 A statement from L’Elysee read;

“Henry called the president from South Africa to tell him that he wanted to see him on his return.”

I can’t imagine what they’d have to talk about – except maybe the fact that Les Bleus finished bottom of their group with only a single goal and point to their names….

Oh! And the fact that Nicolas Anelka was sent home after launching a foul-mouthed tirade at coach Raymond Domenech…

Actually, there was that thing about captain Patrice Evra going AWOL from a press conference after being told he couldn’t tell reporters the truth… 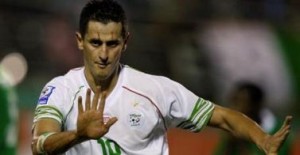 A female journalist has claimed that Algerian forward Rafik Saifi ‘slapped her’ as he left the pitch after the Desert Foxes were knocked out of the World Cup by the USA last night.

“I was waiting for the Algerian players. When Saifi came I just moved away. I felt a hit.

I will make a complaint with FIFA and with the police.”

The incident was witness by the BBC World Service’s Richard Connelly, who seemed to think that the animosity between Saifi and Halimi dates back to last year when the latter published a less-than-favourable article about the Algerian player;

“Rafik Saifi slapped the face of journalist Asma Halifi, she hit him back as a reflex.

He then threw a bottle of sports drink which missed and had to be restrained from attacking her again.

Saifi took exception to an interview that she translated and published in her newspaper, there was a similar incident between the two last year.

She’s going to complain formally to FIFA and to the police later on tonight.”

I’d suggest that they just kiss and make up, but he’d probably end up headbutting her.

Here’s the Portugal squad indulging in a little bit of rhythmic team-bonding.

Deco is taking it FAR too seriously (eyes closed!) and Simao just doesn’t want to know!

“There’s a great history of England versus Germany so this is going to be a wonderful opportunity.”

Did Germany coach Joachim Loew just mention the war? I think he got away with it.

France coach Raymond Domenech will not be charged by FIFA for refusing to shake hands with his South Africa counterpart Carlos Alberto Parreira after the two teams met on Tuesday. (Guardian)

Despite limping off the field yesterday, England striker Wayne Rooney is expected to be fit for his country’s second round showdown with Germany on Sunday. (Telegraph)

Today’s (Thursday 24th June) round is as follows: