Good afternoon all, and welcome once again to the daily World Cup column on Soccerlens, where you can sate all your World Cup needs in one easy-to-swallow dose.

An own-goal, unfairly attributed to Daniel Agger, helped the Netherlands to an opening game win over Denmark in Soccer City yesterday.

The teams seemed fairly evenly matched throughout the first-half, with the slick Dutch attack finding it hard to find it’s way past a resolute Danish defence.

The Oranje made a crucial breakthrough just minutes after the break, when Simon Poulsen‘s botched headed clearance struck Liverpool defender Agger’s back, bounced past a rooted Thomas Sorensen and into the back of the net via the inside of the post.

The Netherlands then sealed what was, in truth, a fairly pedestrian victory when substitute Eljero Elia clipped a shot against the post after racing on to a Wesley Sneijder throughball, only for Dirk Kuyt to routinely dispatch the rebound.

Japan got their campaign off to a surprising winning start after edging out Cameroon in a cagey (to put it awfully politely) affair in Bloemfontein in yesterday’s ‘middle’ fixture.

Japan took the lead as half-time beckoned when Keisuke Honda slotted home at the far post, after finding himself with enough space to bring down Dalsuke Matsui‘s looped cross.

Neither team created much in the way of goal-scoring chances but Cameroon were unlucky not to equalise in the dying stages when Stephen Mbia crashed a powerful long-range effort off the Japanese crossbar.

Defending champions Italy had to come from a goal behind to earn a barely-deserved point against Paraguay in the opening game of Group F in Cape Town last night.

Italy then suffered a potentially huge injury blow at half-time when their influential ‘keeper, Gianluigi Buffon, had to be replaced after suffering back pain due to a flare up of an ongoing sciatic nerve problem.

Paraguay started the second-half in relative comfort until a momentary lapse saw ‘keeper Justo Villar gift Italy an equaliser. After rushing out to misguidedly punch a corner, Villar watched the ball sail over his head only to be smashed into the net by Daniele De Rossi from close range.

Italy then finished the game on top, but failed to make things click in the final third, restricted instead to long-range pot shots.

Watch the best of the action from Italy v Paraguay.

Useless trivia of the day…

“Italy are the only nation to draw all 3 group games and go on to lift the cup. They did this in 1982 and beat Brazil in the final with Paolo Rossi scoring a hatrick. Rossi had been recalled to the national side after a ban for alleged match fixing.”

Much love to SL reader Gerry McCairn for that gem. Smells like an omen to me! 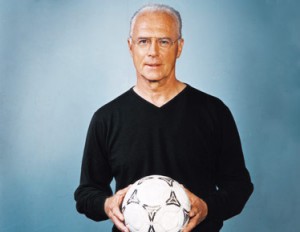 Former Germany legend Franz Beckenbauer has offered a withering assessment of England’s playing style after being subjected to their wholly woeful performance in the opening Group C game against the USA on Saturday.

England’s lumpen performance obviously failed to impress Beckenbauer, who described the Three Lions’ display as ‘a reversion to the bad old days’ in his column for South African newspaper The Times;

“What I saw of the English against the USA had very little to do with football.

It looked to me as if the English have gone backwards into the bad old days of kick and rush.”

The 64-year-old also added that there may not be much Fabio Capello can do about England’s moribund style, given the dearth of options available to him;

“I am not sure if the England coach Capello can still change much there.

The English are being punished for the fact that there are very few English players in the Premier League as clubs use better foreign players from all over the world.”

Now, I have to say that I pretty much agree with Der Kaiser on this one. Sitting through the England’s hoof-fest of a display was ulcer-formingly frustrating and down-right demoralising.

However, one thing I would point out to ol’ Franz is, although Germany’s 4-0 dismantling of Australia was very impressive and a joy to behold, three goals from a couple of Poles and a Brazilian hardly smacks of ‘homegrown talent’ now does it? 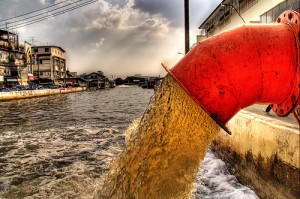 The strip that England were due to wear in there upcoming game against Algeria was subject to a ‘dirty protest’ yesterday, when a sewage pipe at their Bafokeng Head-quarters leaked all over the kit that had just been washed, pressed and neatly folded in preparation for Friday’s clash.

“There are no arrangements for a change of kit for Cape Town. The strip has been re-cleaned. There was no real problem or alarms.”

Phew! I was worried that there may have been a real problem or alarm for a minute there.

After their stinker against the Yankee-doodle-Dandy’s t’other eve, the fact that England’s kit got covered in sh*t seems fairly fitting, doesn’t it?

The BBC are investigating the possibility of offering World Cup viewers a ‘vuvuzela-free’ coverage option via the red button;

“While the BBC are committed to reflecting the atmosphere within the stadiums on their main coverage, they could also offer a ‘clean’ feed that wipes coverage of most crowd noise.”

(Quotes taken from The Guardian.)

The broadcasting company are said to have received nearly 550 complaints from viewers about the constant drone of the South African horns, with many people feeling they are ‘being forced’ into listening to the optional Radio 5 live commentary because of the cleaner feed.

I can’t help but think that the Beeb’s efforts should really be channelled in to providing us with a ‘Mark Bright-free’ feed instead. 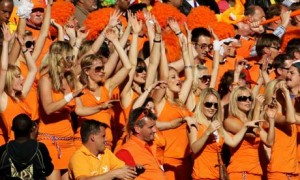 FIFA threw 36 female, mini-skirt clad fans out of Holland’s game against Denmark yesterday accusing them of ‘promoting an unlicensed beer’.

The women were accused of ‘ambush marketing’ as FIFA only allow promotional activity from brands that have official sponsor status.

Peer Swinkels, a spokesman for the beer brand in question said (presumably through the side of his mouth);

“It’s a nice dress. Very fashionable, in my opinion, people should have the right to wear whatever they want.”

It’s good to know Sepp and co. are always out there fighting the evils that constantly threaten to undermine our beloved sport! 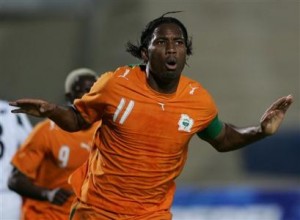 Ivory Coast striker Didier Drogba has received special dispensation from referee Jorge Larrionda (the official that will take charge of Ivory Coast’s first game against Portugal tomorrow) to play whilst wearing a protective cast on his injured arm.

The cast also had to be run past Portuguese officials at a ‘match co-ordination meeting’, but the delegation also deemed it safe for Drogba to use.

Drogba fractured his arm in a pre-World Cup game against Japan and was thought to be a major doubt to regain his fitness in time, but it would now appear that the Chelsea forward will feature for Les Elephants.

“I don’t know what I have done to Lippi, maybe he doesn’t like my personality. Others got picked, I didn’t. I would be happy if Italy wins, but I will not be happy for Lippi.”

Sampdoria striker Antonio Cassano isn’t bitter about his omission from the Azzurri squad or anything.

FIFA have again reiterated their faith in the new Jabulani ball, despite everybody who’s been with ten feet of it claiming it to be the worst football ever produced by anyone EVER. (BBC Sport)

Good news for England as both Wayne Rooney and Ashley Cole have returned to training. (F365)

The company that produce England ‘keeper Rob Green‘s goalie gloves have vowed not to ‘drop him’ (do I detect a hint of irony?) following his blunder against the US. (Telegraph)

Fancy winning yourself £1600? Give the Soccerlens World Cup Fantasy Football Challenge a try then.