1-0 up with just under 20 minutes to go; yet the way the game was ending – with Wolves pressing and United failing to convert their infrequent yet profound chances – the dying moments simply screamed the word ‘upset’.

And then that inevitable golden ‘oh my god I can’t believe United dropped points at Molineux’ chance came. Carrick (who, it’s appropriate to mention, had a poor game) cleared the ball weakly to a Wolves player, and then with a fumbling passage of play, the ball eventually fell to the marginally onside, and so completely unmarked, Volkes. Regardless of the legitimacy of his status in the box (and of course the incapabilities of our defence as to why he was alone in the first place), he had space and time to slot it in from about 6 yards. However instead he decided to sky it over. If that goal to equalise would have all but finished our challenge (after Arsenal kept the pressure by beating Burnley 3-1 at home), perhaps Volkes’ convenient forgetting of the difference between football and that stupid game with conversions and sin-bins all but saved us.

Being the pessimistic bastard I am, up until that divine intervention in the 91st minute, I had already penned the title of my post-match review: ‘United vs. Wolves: or why I hate International friendlies’. It’s more than fair to say we lacked potency and a convincing attacking threat without our most prolific and reliable front-man. Not only did Berbatov – as a lone striker – fail to really test the Wolves defence, but our only attacking option on the bench had an absolute shocker when he came on to apparently give us an injection of dimension in the final third of the pitch.

I’m still not sure what to think of Diouf, and I’m all for not judging a player until they have had time to truly show their worth; but today, with the half an hour of sloppy, wasteful football he played, he single handedly and rather capably reduced the respect and praise he has earnt as a ‘promising youngster’ to instead enter the realms of average and overrated. Harsh? Very! Especially after all the ‘don’t judge’ crap I reeled off to introduce this paragraph. Still, few would disagree that the boy has a lot to learn and maybe, just maybe, has returned back from his loan spell at Molde too soon. That is unless he ‘does a Nani’ on us?

A win to take us top, scored by Scholesy’s 100th, can just about overshadow the fact that we struggled – or at least failed to impress – for much of this preconceived ‘easy 3 pointer’. However the underlying realism is that we do in fact rely heavily on the presence, movement and goals of Rooney.

Berbatov seemed lost, Owen’s out and Diouf…well…we’ll see. But either way, we need to keep him fit and utilise him as cautiously and effectively as possible. We thankfully no longer have to monitor Cappelo’s use of him for the remainder of this season,  so it is now down to Sir Alex to keep him safe and, more importantly, find a way for Valencia’s consistently immense contribution to work with someone else other than Rooney.

Yet failing that, it’s looking like the only way we’ll win the League is by wrapping him up in that fun poppy stuff and relying on his attitude, once reserved for today’s goalscorer: goes to work, scores goals, goes home (yet, unlike the shy retiring Mr.Scholes, feel free to add ‘do stupid adverts for my boot sponsors that involved me beating myself in a game of one-on-one’ in there).

Scholes, congratulations; and Wayne…come back soon! 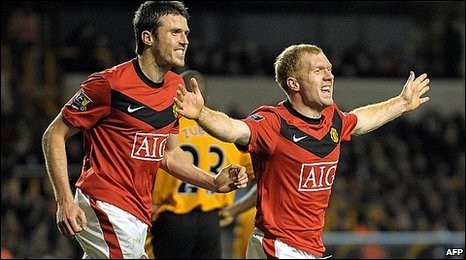