The prospect of watching Edinson Cavani play in the Premier League is thrilling to one and all. The Uruguayan has been one of Europe’s top strikers in the past three seasons, first arriving in the limelight with Napoli in 2011 and then further enhancing his reputation by shining for Paris Saint-Germain last season . Several Premier League clubs targeted Cavani in the past but nothing materialised. Now though, a move to England seems a very distinct possibility for the 27 year-old, with PSG willing to offload the striker to facilitate an €80 million transfer for Angel Di Maria from Real Madrid. 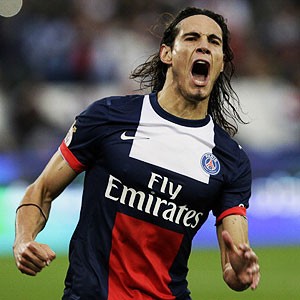 Now, the most important question arises. Which club will sign Cavani? The fact that such a top striker is available for sale should make most big clubs go bonkers with excitement, and sure enough, offers have come from several big English teams. The three sides who have emerged as the most likely candidates to land Cavani are Arsenal, Chelsea and Manchester United.

Here, we analyse how the move would benefit (or harm) the club and the player.

It is no secret that most Arsenal fans want manager Arsene Wenger to sign a world-class striker. Currently, the only out and out centre forward at the club is Olivier Giroud and the Frenchman is yet to convince everyone that he’s good enough for Arsenal to win the Premier League.

Despite the huge amount of money though, a move for Cavani would be an incredible boost to Arsenal’s title hopes next season. Having already signed Alexis Sanchez, Calum Chambers and Mathieu Debuchy to boost the squad depth, Arsenal find themselves in a good position to win the league for the first time since 2004.

Wenger though, is known for his prudence and parsimony, so it will be interesting to see if he shells out this kind of money.

Chelsea have a long history with Cavani, having pursued the striker right from his Napoli days. This Sky Sports report from 2013 shows the interest the Blues had in bringing Cavani to Stamford Bridge even back then. The rumours have continued this year, but whether the transfer materialises this time around remains to be seen.

Jose Mourinho has already signed a world-class striker this summer, bringing in Diego Costa from Atletico Madrid. Chelsea have also brought back club legend Didier Drogba to the club on a one-year deal. Samuel Eto’o and Demba Ba have departed, but Fernando Torres is still there. This means that Chelsea already have three top strikers at the club.

With Mourinho’s system only allowing one striker to be on the pitch at a time, it would be difficult for Cavani to be assured of a starting place at Stamford Bridge. He was vocally critical about not being played out-of-position at PSG last season, and would not appreciate the same happening again.

Chelsea certainly have the money, but spending such a mammoth amount on a player they can do without seems unlikely.

United’s interest in Cavani dates back to last month, when it was first revealed that PSG were willing to sell to the Red Devils. After last season’s disastrous campaign, the club were linked with several big-name players, and Cavani was listed as a major target.

The situation at United though, is somewhat similar to that at Chelsea. There is no doubt that they have the money to spend, but whether they need to do it remains a debatable question. The 3-4-1-2 system which new manager Louis Van Gaal looks set to adopt the club is tailor-made for all of Wayne Rooney, Robin Van Persie and Juan Mata to flourish.

Van Persie has been a long-time personal favourite of his compatriot Van Gaal, while Rooney has been assigned as club captain. Therefore, it is impossible that Cavani would displace either of them and start for the Red Devils.

Also, with United planning to spend big on Di Maria, a move for Cavani to Old Trafford looks extremely unfavourable for the club.