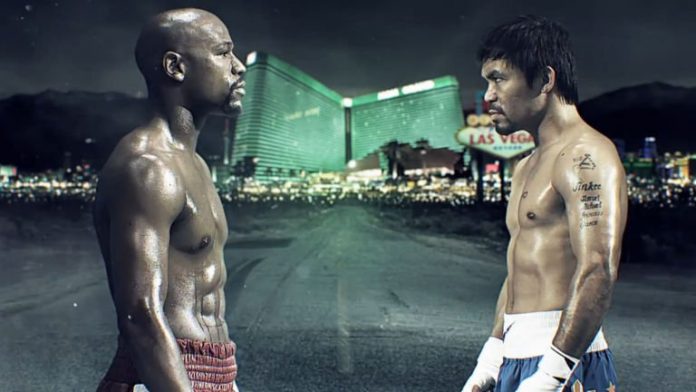 Pacquiao turned back the clock to produce his best performance in 5 years. But Vargas is no Mayweather so do not let that performance kid you of any improvements in Pacquiao.

Mayweather’s appearance at ringside further fanned the flames of a potential rematch of their 2015 “Fight of the Century”. Mayweather claimed that he was at the fight so his daughter could watch boxing – who really believes that excuse!

Their 2015 ‘Fight of the Century’ was a dud in the ring despite the huge anticipation and commercial revenues it generated including a record 4.4 million PPV buys in the USA alone.

Mayweather controlled the fight from start to finish. His incredibly effective defensive style nullified a very sluggish Pacquiao who looked a shadow of his former self.

Despite calls from Pacquiao’s camp of a rematch, if it were to happen Mayweather and Pacquiao would be 40 and 38 years old respectively. Mayweather would not have fought for 18 months and Pacquiao a battle-worn veteran of 67 fights. Both would be well past their best come the night of a potential rematch. In turn a very poor contest would probably unfold with the same outcome as their first bout.

Instead of a rematch, which only benefits the fighters and their promotional companies not the sport of boxing, younger, fresher fighters like Keith Thurman, Vasyl Lomachenko and Anthony Joshua should be given the spotlight in 2017 to showcase their skills in and out of the ring.

But money talks and if the price is right the rematch is inevitable.

Due to their huge profiles it could rake in at least 2 million PPV buys in the USA with both earning ridiculous amounts for 36 minutes of work.

However it really is time for boxing to move on from the era of Mayweather and Pacquiao.

There is nothing worse from the point of view of a boxing fan than to see two fading legends fighting for a final pay day. Boxing fans worldwide want to see the best fighting the best at the peak of their powers not years after their heyday.

So let’s hope this rematch does not happen in 2017.

Who would have thought a few years ago, a boxing fan like myself would be praying that Mayweather and Pacquiao do not fight again.