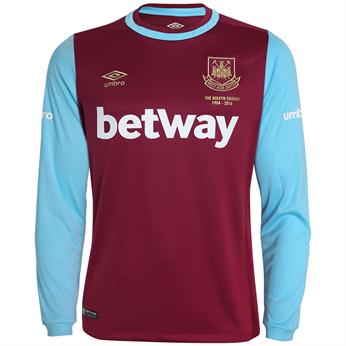 Far from being a club that relies on reminding others of its’ past glories, West Ham have released a commemorative kit to mark their departure from the Boleyn Ground; which has been their home since 1904.

Cynicism aside, it’s a fantastic looking kit achieving what you can assume to have been the brief of a modern update to a retro kit with subtle nods to The Boleyn stadium history. Light blue sleeves, claret body and crew neck is a simple combination that is thankfully quite difficult to get wrong, the worst West Ham kits are usually bestowed upon Goalkeepers and away kits (91-92 GK, 03-04 away). The club crest is ideally located on the left side of the chest for players to grab and kiss in post goal celebrations, before making their intention to play for a top 6 club known to the media, followed by a move to Hull City and subsequent relegation to the Championship (Mohammed Diame providing excellent schadenfreude). Just below the crest is the text “The Boleyn Ground 1904-2016″ appearing in gold like the crest, whilst on the back the John Lyall gates also feature in gold as a nice touch.

Emblazoned in bold white font across the front of the kit, the name of a large betting company features prominently as a fitting satire to reflect modern football & the clubs’ move to the Olympic Stadium juxtaposing the tributes to the working class roots of the club & stadium with the largest ever commercial sponsorship deal; but for £20mil who cares. They’ll be able to get one and a quarter Andy Carroll’s for that and at least it’s not Qatari money.

Come the 7th of May 2016 (the last home game at the Boleyn), when the final whistle goes and the last ball is kicked the Boleyn Kit can’t just be any over-priced, ill-judged for your age/size, piece of fan attire used to nail ones colours to the mast, but an emotional sponge absorbing the literal and metaphorical tears of The Boleyn’s attendees, representative of 112 years worth of history, players & fans. The final game will be an ‘I was there’ moment and the shirts will be treasured & kept safe by every owner for generations to come as their closest physical & emotional connection to their club on such a momentous occasion. The shirt is definitely worthy of the club and is a fitting tribute to the home of the hammers, now let’s see whether the players’ are worthy of the shirt in this epic final season at The Boleyn.