Arsenal return to domestic action on Saturday after an impressive 2-0 victory over Borussia Dortmund in the UEFA Champions League on Tuesday.

The win ensures Arsène Wenger’s side reach the knockout stages once again, and with a game to spare. With a short rest before kicking off the weekend’s action at the Hawthorns, Gunners fans will be hoping their side can end a two-game losing streak in the Premier League.

West Brom also head into this match with back-to-back league losses whilst Alan Irvine’s side’s only victory in their last six has come at Leicester City.

More bad news on the injury front for Gunners fans this week as it was confirmed that Jack Wilshere will be out for three months with an ankle injury.

Goalkeeper Wojciech Szczęsny missed the midweek action with a rib injury but the Polish goalkeeper is expected to be fit enough for this one. Summer signing David Ospina continues to be ruled out through injury. Should Arsenal’s first choice not return, Damián Martínez kept a clean sheet versus Borussia Dortmund.

Laurent Koscielny was an unused substitute midweek as the French centre-back returned to the squad after a lengthy layoff. Provided he’s fit to start this one, Nacho Monreal will be back on the substitute’s bench. Mathieu Debuchy is still sidelined.

Along with Wilshere, a number of Wenger’s first-choice midweek are out. Mesut Özil is a long-term absentee and Mikel Arteta is out after picking up an injury against Dortmund. Theo Walcott is a doubt with a groin injury. Abou Diaby and Serge Gnabry have been out for a while.

Olivier Giroud marked his return with a consolation goal in defeat to Manchester United last weekend and is pushing Danny Welbeck to start this one. 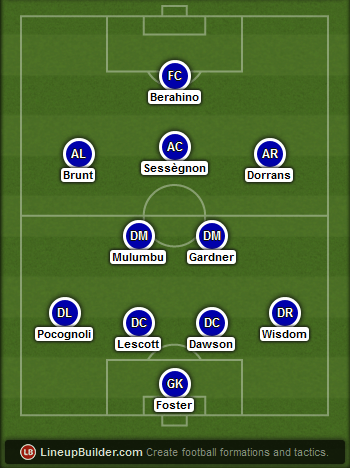 West Brom play a conservative way under Alan Irvine – they often have a good defensive shape and don’t throw too many players forward. Youssouf Mulumbu hasn’t played too much recently but will surely be considered to knock Arsenal’s slight midfield off the ball. Saido Berahino offers pace on the counter and should be a useful threat with Arsenal so poor at defending on the counter-attack and with a huge pace advantage versus Per Mertesacker. 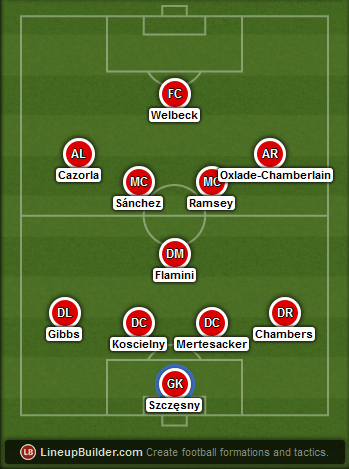 Laurent Koscielny returning is a boost to the Arsenal defence. Despite a large number of midfielders on the books, Arsène Wenger is getting shorter on options with the number of injuries his side are picking up. Mathieu Flaimini has been poor protecting his back four this season but going forward Arsenal will control possession and create chances with this midfield.

Alexis Sánchez vs Craig Gardner
Alexis Sánchez has terrorised most defences this season and should the Chilean start behind the striker it won’t bode well for the home fans. Craig Gardner is prone to picking up cards and Sánchez loves to run at his opponents. Arsenal’s biggest summer signing is a very favouable match up here – neither centre-back is the quickest in the world either.

Danny Welbeck vs Joleon Lescott
The Arsenal striker has the advantage when it comes to pace in this one. Joleon Lescott is prone to errors and the former England international could easily be exposed in this match by an Arsenal side who are likely to get in and around the West Brom penalty area several times in this match. Welbeck is far from any sort of form of late but should see a few chances in this game provided he starts.

Saido Berahino vs Per Mertesacker
One favourable matchup West Brom do have in this match is the pace and goalscoring form of their striker Saido Berahino. The young Englishman certainly has the beating of Per Mertesacker when it comes to pace and isn’t a bad shout to find the back of the net in this one with the Gunners looking so poor at defending counter-attacks this season.

Prediction: West Brom 1-2 Arsenal
Both sides out of form in the league but we’re going with Arsène Wenger’s side to take three points from the Hawthorns on Saturday. Not an easy ground to go too but with the quality of Alexis Sánchez and that attack there’s enough fire power to outscore the struggling home side.