Premier League table toppers Arsenal were brought back to earth with a bang on Saturday, as Arsene Wenger’s men were put to the sword 6-3 by Manchester City at the Etihad Stadium.

The north London side looked tired from their trip to Napoli in midweek and were thoroughly outplayed by Manuel Pellegrini’s men. Here is where it went wrong for the Gunners.

Both sides lined up with bespoke versions of the popular 4-2-3-1 formation, but it was the hosts that exposed the system’s one main weakness better than Arsenal.

Although 4-2-3-1 gives a good balance if used correctly, it can leave a team’s full-backs exposed. This was the case for Arsenal, with the visitors’ wide midfielders not tracking back against the City full-backs.

Pablo Zabaleta in particular managed to forge space against Nacho Monreal, but both Arsenal full-backs found themselves in two-on-one situations. 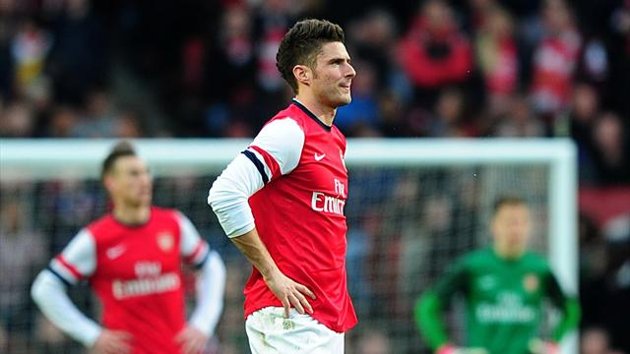 Olivier Giroud is having a good season but is starting to pay the price for featuring in almost every game. The French striker looked fatigued here more than at any point during the campaign, and was bullied by Kompany and Demichelis.

Arsene Wenger obviously saw this and replaced the ex-Montpellier man with Nicklas Bendtner in the second-half, but the over-reliance on Giroud needs to be addressed in the January transfer window.

Ozil hasn’t showed up for the big games

Similar to Arsenal’s defeat at Old Trafford, Mesut Ozil played a peripheral role in his team’s efforts and failed to provide the creative spark to see his team as a real threat.

The Germany international has been in great form against the so-called weaker teams in the division, but is yet to really shine in a game against a title contender.

Arsenal fans will be impressed with the former Real Madrid man’s start to life at the Emirates Stadium, but Ozil needs to step it up in games where Arsenal do not have it all their own way.

Despite the presence of designated enforcer Mathieu Flamini, Arsenal were outplayed and outmuscled in the centre of the park.

Fernandinho put in his best performance in a City shirt, while Yaya Toure was his usual commanding self.

As such, Aaron Ramsey struggled to influence proceedings, while Jack Wilshere was guilty of being caught on the ball and misplacing passes due to pressure from the opposition.