Wenger interested in Cavani, optimistic on Walcott and Zaha update 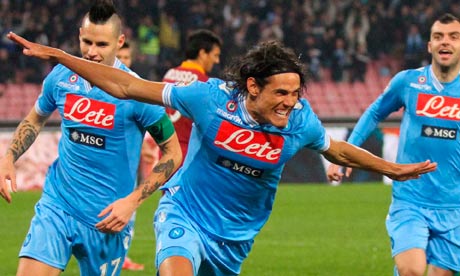 Arsene Wenger’s quotes today about Arsenal’s transfer targets make for interesting reading – he speaks about interest in Edinson Cavani, Walcott’s contract talks and whether Arsenal have made a move for Zaha or not.

“Cavani is a player that I like. Will he cost a lot of money? That’s for sure. Nobody would deny that. [But] our banker lives just next to me at the moment and he is ready if we find the right player.”

Arsenal’s biggest challenge here may be that if Arsenal were to go in, Napoli are more than likely to push other clubs to submit competing or higher offers to get a bidding war going. Arsenal may match transfer fees but convincing Cavani that he should accept lower wages to play at the Emirates is a near-impossible mission.

Before you quote RVP to Man Utd, remember that RVP is on 180k a week basic (similar to Rooney). Arsenal aren’t in that league.

“We are looking at him, but at the moment we have not made any bid for him. I don’t know if Manchester United are in for him. Anyway, if you call any club for any player, they will tell you Man Utd, Milan, Real Madrid are as well in for him, but it is always difficult to know if it is true or not.”

It’s one of the biggest reasons why clubs play a waiting game to secure their targets when selling clubs are looking to get bidding wars started instead of negotiating for a good deal. Wenger said as much:

“I was scared at some stage, yes, that he could leave because it is like that with the experience I have in negotiations,” Wenger said. “When things last too long, it is never a good sign. In this case, it took us some time to get where we want to get. It is still not finalised, but hopefully it will be done by this weekend. There is a possibility. My optimism is at 99% now.”

Let’s hope – for Arsenal’s sake – that this is not like his optimism for RVP or Fabregas.