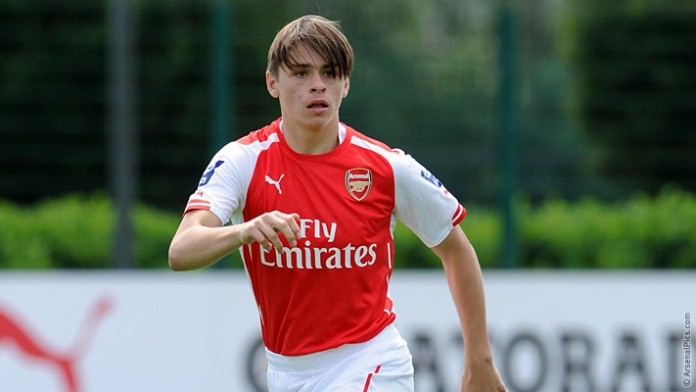 Arsenal have confirmed their defender George Dobson has completed a permanent move to West Ham United.

The teenager was leading the Gunners’ Under-18’s during the 2014/15 season and Arsene Wenger has allowed the 17-year-old join their London rivals.

A statement on Arsenal’s official website read,” Young defender George Dobson has signed for West Ham United. He also featured regularly for the club in the under-19 Uefa Youth League and for Steve Gatting’s under-21s in 2014/15.”

“Everyone at Arsenal would like to thank George for his contribution to the club and to wish him well with his continued development at West Ham.”

The only difference in the teenager’s move to West Ham and the earlier transfer is that they were all the first team players. Meanwhile, Dobson has admitted that he “over the moon” after leaving Arsenal and joining the Hammers in the summer transfer window.

“I am over the moon to have signed and have been a West Ham fan since I was five-years-of -age and this is a surreal moment. Putting pen to paper is a dream come true for me, Dobson told West Ham’s official website.

“I had a great ten-years with Arsenal and they helped me as a footballer and as a person. But the time is right to move and I cannot wait to get started. I give 100 per cent every time I put the shirt on and I will give everything for the team.

“The amount of players who have come through the academy, it was a no-brainer for me. There are lots of opportunities here and you have just got to take them. I know I will have to work hard.

“Terry Westley is a great guy and has shown a lot of interest in me. That is really important for a young person and I am looking forward to working under him.”