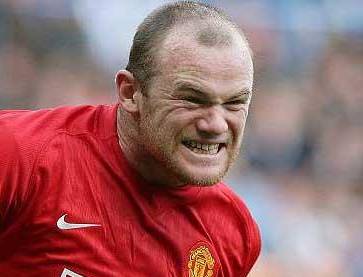 Given his recent extra-marital misdemeanours, it should come as little surprise that Manchester United striker Wayne Rooney‘s intrinsic commercial value has – if you’ll excuse the unavoidable pun – waned of late.

His recurring inability to regulate which orifices he crams his junk into has already cost Rooney one of his high-profile sponsors, after Coca-Cola chose to withdraw his gummy smirk from their ‘Coke Zero’ products – claiming that they felt it was ‘no longer appropriate’ to run a promotional campaign that was endorsed by a man with less respect for the sanctity of marriage vows than Errol Flynn.

According to the new (Anglo-centric) ‘footballing rich list’ commissioned and published by FourFourTwo.com, Rooney has seen his market worth drop by a staggering £12 million in the few short weeks since the allegations over his private perfidities were made so very public – thus seeing him fall from 3rd to 6th in the individual footballers’ rankings and from 65th to 89th overall.

The 24-year-old now finds himself behind his United teammates Ryan Giggs, Michael Owen and Rio Ferdinand in the pecking order, with veteran Newcastle defender Sol Campbell (a re-entry thanks to his lucrative, short-term contracts at Notts County and Arsenal) also coming in two places above him in fourth spot.

LA Galaxy’s walking billboard David Beckham has unsurprisingly retained his position at the top of the individual pile, despite his value dropping by 20% from £125 million to £100 million due to him missing the World Cup through injury as well as his ‘advancing years’ -as Hugh Sleight, the editor-in-chief of ­FourFourTwo.com, explains;

“For Beckham, missing the World Cup and approaching retirement have had an effect and we’ve cut his value by a fifth to £100m. As you’d expect, Brand Beckham™ have a cunning business plan to ensure their financial power continues even after Becks hangs up his boots, but that’s still in its early stages.

Wayne Rooney’s flirtations with the front pages have clearly affected his value to sponsors and we ­correspondingly cut his value by a third. He’s young and he has time to bounce back, on and off the pitch, but for the time being, his reputation has been seriously tarnished.”

The individual manager rankings offer little in the way of surprises, except for the inclusion of Ipswich Town manager Roy Keane in second place, one position (and a full £2 million) above his former manager at Manchester United Sir Alex Ferguson – although his career earnings as a player are obviously also taken into consideration:

And lastly, the individual owners and major shareholders rankings:

The full range of lists and an explanation as to how they are calculated can be found on the FourFourTwo website.