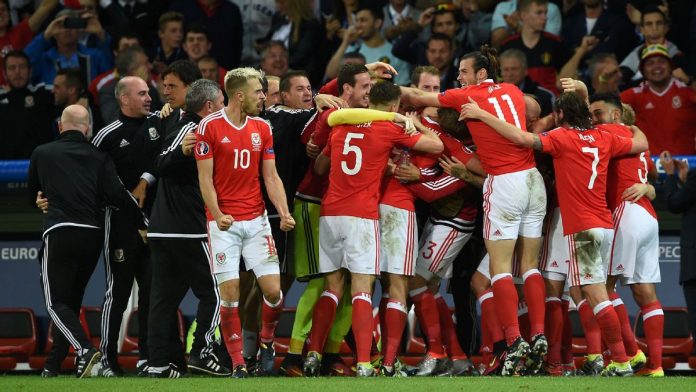 Wales came from behind to beat Belgium 3-1 in Friday’s Euro 2016 quarter-final in Lille and set up a mouth-watering semi-final clash with Portugal.

Belgium started the game at a frantic pace and created some early pressure with Yannick Carrasco, Thomas Meunier and Eden Hazard had all came close to scoring.

The pressure kept coming and the Red Devils eventually took the lead in the 13th minute through midfielder Radja Nainggolan. The Roma midfielder, who has been a €32m top summer target for Chelsea, met Eden Hazard’s lay-off and blasted into the top left corner from 30-yards out.

Prior to the match, Gareth Bale said in his press conference that Wales have the confidence to stop Belgium, having previously beaten them in Euro qualifiers. Their reaction to falling behind was superb with Neil Taylor and Bale been denied by stunning saves from Thibaut Courtois. A mistake from Jordan Lukaku proved costly as Ashley Williams met Aaron Ramsey’s corner with a thumping header to level the scoreline.

Belgium, despite all their wealth of talents, often fail to play as a unit, and the goal seemed to have unsettled them with Wales finishing on top at the break.

Marc Wilmots introduced Marouane Fellaini as he looked for more control in the midfield and Belgium made a flying start again in the second half with De Bruyne and Hazard nearly missing the target.

Wales, however, regained control of the match again and took the lead in the 55th minute. Arsenal midfielder Ramsey’s lofted cross found Robson-Kanu, who produced an outrageous bit of skill (Johan Cruyff would have been proud to see that) to bamboozle three Belgian players before placing the shot past Courtois.

In the end, Vokes delivered the sucker punch with a stunning header from Gunter’s cross and ended Belgium’s all hopes of a possible comeback.

Wales made the quarter-finals of the World Cup in 1958 but for the first time in their history, they have moved to the semi-finals. They had exceeded all expectations when they made it to the Euro finals; this journey is all but a fairy tale and they will be remembered as heroes for generations.

They face Portugal next, a team that have yet to win a match inside 90 minutes. Wales have made it to this stage not by luck or results going their way but by being one of the best four teams in the tournament.

Wales will be without Ramsey and Ben Davies, two key players for the next round, after they picked up yellow cards and will be suspended, but clearly all eyes will be on Bale vs Ronaldo, the two Real Madrid superstars when both the teams meet in a few days time.