Thursday evening saw a good, if unspectacular, result for a second string Villa in Vienna. The Midlands club hung onto a 1-1 draw against Rapid Vienna in the Europa League Qualifying Play-Off round.

The tie saw caretaker boss Kevin MacDonald ring eight changes to the side that impressed in the 3-0 victory over West Ham at the weekend. Absentees included the sidelined Agbonlahor, Carew, Collins and Cuellar as well as the suspended Richard Dunne. MacDonald clearly had one eye on this Sunday’s away game at Newcastle as he also rested the likes of Stilyan Petrov along with Ashley and Luke Young.

MacDonald, who is now being touted to take the reins full time at Villa Park, clearly has faith in the youth and reserve team players that he has worked with in the past few seasons, naming an array of youngsters in the squad. Among the starters were Eric Lichaj, Jonathan Hogg, Barry Bannan and the impressive Marc Albrighton. There were also starts for fringe players including Brad Guzan, Habib Beye, Curtis Davies and the captain for the night Nigel Reo-Coker.

Despite using a previously untested side, Villa started brightly, dominating possession without any real cutting edge. Nevertheless it was the home side that created the first chance with Atdhe Nuhiu forcing a great save from the American Guzan. However Villa broke the deadlock in the 11th minute after a good run by Albrighton left the Rapid defender on his seat before a wicked low cross picked out the run of Barry Bannan to tap home into an empty net. The signs looked good for Kevin MacDonald, who made a brave decision to field such a weakened team. This decision looked to be paying off and the Villains seemed as though they would kick on and win comfortably. 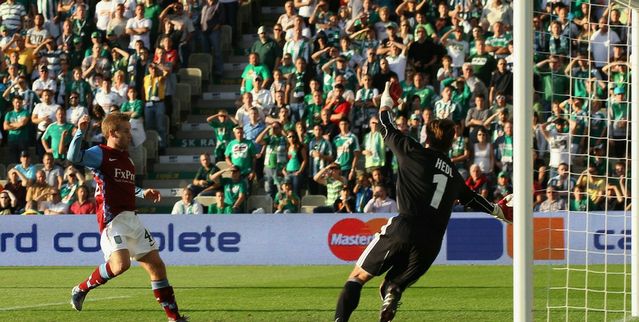 It was only after the first delivery into the away sides box saw an obvious misunderstanding between a make shift back four, that the home side started to look dangerous. A string of excellent set pieces and crosses from the impressive Vienna star man and club captain Stefan Hoffmann eventually took their toll in the 32nd minute. A freak goal saw a Hoffmann cross elude the Villa back line and keeper Guzan, to curl into the corner of the net. Replays showed that striker Atdhe Nuhiu got the faintest of flicks, beating an edgy Curtis Davies to the ball. The defender continued to struggle to deal with the big forward and may need to do more of his talking on the pitch to warrant a starting berth.

MacDonald’s side didn’t fully recover from this setback and continued to concern the travelling claret and blue contingent when defending set pieces. Vienna grew in confidence and targeted a shaky Villa resistance from crosses throughout the game. A promising spectacle then quickly became a stop-start match due to a far too ‘whistle happy’ referee and some poor challenges. The home side had the best of the chances with the goal scorer fluffing a simple header from, you guessed it, a set piece, and man of the match, Hoffman, had a free kick well saved by the number 2 keeper. Besides the goal there was little threat in terms of goal scoring opportunities from Aston Villa with only a Reo-Coker effort hitting the side netting to mention.

One sour note was an injury to Vienna raised, Villa substitute Andreas Weimann, who picked up an ankle problem just minutes after entering the fray. The youngster was clearly distressed after a disappointing return to his homeland and former club in front of his family.

On a positive note, prospects Albrighton and Bannan performed admirably and a decent captain’s shift from Reo-Coker settled the good ship Villa nicely. All in all, a fair and decent result on Aston Villa’s behalf, bringing home an away goal to steady the nerves for next week’s tie. A stronger side will be expected and required, to ensure the clubs progression to the group stages of the Europa Cup and complete their revenge over their opponent’s who dumped them out of the competition at the same stage last term.