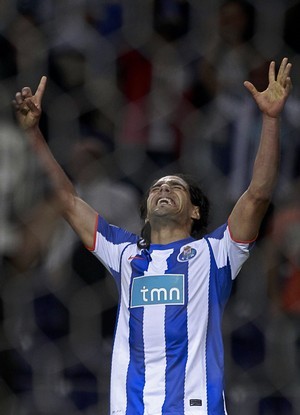 Three games. Fifteen goals. Even after a sloppy start in which they allowed Villareal to go in 1-0 up at half-time, FC Porto insisted on being brilliant. Having scored five in each leg against Spartak Moscow, Andre Villas Boas’ all-conquering cohort decided to repeat the trick in just one half against Villareal to set up a final against either Benfica or Braga.

For once this season, Porto fans were forced to suffer a little as a surprisingly abject first-half display, during which centre-backs Rolando and Otamendi went for an evening stroll which allowed Cani the space to put Villareal in front, meant the newly-crowned Portuguese champions went in 1-0 down at the break. Normal service was resumed in the second-half, however; Radamel Falcao scored from the spot to level the score before Freddy Guarin made a characteristic run into the box, shot from an angle and headed home the rebound from Diego Lopez’s save. Falcao then sandwhiched a predatory finish, after some excellent play down the right from Hulk, in between two bullet headers to give himself fourteen goals overall in the competition.

The other Semi-Final, an all-Portuguese affair, was much tighter. Having hit the post in the first-half, Benfica went ahead through centre-back Jardel, before Braga captain Vandinho levelled the score three minutes later. Oscar Cardozo then struck a beautiful free-kick to win the game for Benfica, but the tie looks delicately balanced. Braga’s away goal, coupled with Benfica’s struggles on their travels in the Europa League this season and their poor recent record at Braga, would suggest that this one is far from over.

Whoever Porto are dealt in the final, however, Villas Boas will fancy his chances of emulating Jose Mourinho by winning Europe’s ‘other’ major competition in his first full season, given his team’s utter dominance of domestic football this year. Having hammered Benfica 5-0 (what other scoreline could it have been?) at the Estadio do Dragao earlier in the season, they then beat  Benfica on their own patch twice in two weeks to guarantee the league title and turn around a 2-0 deficit in the domestic cup Semi-Final. This being the Benfica who are already guaranteed to finish second ahead of Braga.

In the meantime, Portuguese football can celebrate one of its greatest successes. Although Portuguese teams have reached fifteen major European finals at club level, this will be the first all-Portuguese affair in the final of a major tournament. It is, ultimately, the expression of the fact that the Portuguese, after decades of occasional highs amid years of disappointment, can finally lay claim to being one of football’s major forces for the first time since the 1960s. Since 2000, the country has hosted a European Championship and reached the final, appeared in a further semi-final and quarter-final of the same competition, and reached the World Cup Semi-Final. Luis Figo and Cristiano Ronaldo have each been voted the best player in the world, Jose Mourinho is almost unanimously viewed as the wold’s best manager and, excluding this year, Portuguese clubs have appeared in three major finals.

Whether the likes of Radamael Falcao, Hulk and Rolando decide to stay together to mount a Champions’ League campaign next year remains to be seen. Given that Portuguese football has lost the likes of David Luiz, Ramires, Angel di Maria, Raul Meireles and Bruno Alves in the past year alone, one would imagine that the three Europa League adventurers will probably need to rebuild their teams once more in time for next season. In the meantime, there’s a major trophy to play for.