Manchester United’s defeat against Tottenham at Old Trafford on Saturday had been coming, with Sir Alex Ferguson’s side punished for a lacklustre start to their Premier League campaign.

It is in midfield that United are looking most vulnerable at times, though, with a lack of pace and players who are either too old or inexperienced.

Such is United’s dominance in a large amount of games, particularly at Old Trafford, there are often times that certain frailties in the team are not highlighted. They have such quality throughout the squad that invariably someone will get them out of jail, but then a top class side comes along and gives them a huge wake up call. This was the case on Saturday where a strong, young, talented Spurs midfield completely outplayed United’s. The likes of Sandro, Gareth Bale and Moussa Dembele were superb throughout, and with all three 25 years old or younger they easily outplayed and outran the United trio of Ryan Giggs, Paul Scholes and Michael Carrick, all 30 or pushing 40.

Giggs was particularly poor, making just 10 passes during his 45 minutes on the pitch, with just five of them finding a teammate. The 38 year old is the most decorated player in the history of English football and is a true Old Trafford great, but for the first time a large number of fans are questioning whether he should retire, let alone be starting games of such magnitude. He certainly features less and less these days, with his influence on the pitch nowhere near what it once was. 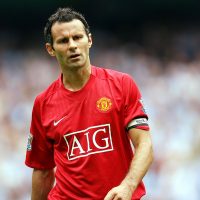 Scholes is arguably the most talented English player of the last 20 years, and while he still has plenty to offer there are also major flaws in his game that he gets away with more often than not. When United are dominating a game there is nobody better to have dictating it than the 37 year old, who is a joy to watch with the ball at his feet. For all of his undoubted brilliance, however, too many teams are guilty of standing off him and giving him all the time in the world to spray the ball around; what many players would give to have as much time on the ball as Scholes. To show him up you need to shut him down and allow him no time to get his head up, as well as running at him with the ball, where his suspect defensive qualities come into question. This is exactly what Spurs did on Saturday, and the ease at which Bale waltzed through the United midfield, and the deteriorating Rio Ferdinand, was alarming, and it is an issue Ferguson needs to address fast. Playing Giggs and Scholes is always a risk, as shown at The Etihad last season, where Yaya Toure destroyed them both with powerful running and lightning pace. 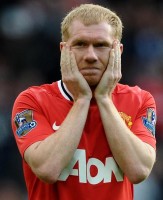 Carrick is less of an issue than Scholes and Giggs, and at 30 he is still in his prime and playing very well week in, week out. The biggest problem in his game is his lack of pace, which again is not an issue if he has a quick midfielder alongside him, but he hasn’t of late.

Tom Cleverley is the natural answer, with a combination of composure on the ball and decent pace, but he is still maturing and not yet at a level where he can dominate a midfield in a big game. Anderson is another who could play in the centre, but he has not progressed at the speed Ferguson hoped he would, and he is hugely inconsistent. At 24 he has plenty of time to improve, and he does have the ability to run with the ball at pace. It is perhaps worth persevering with the Brazilian despite his shortcomings.

Darren Fletcher was once that all energy midfield player that United now lack, but it remains to be seen if he will ever get back to being the the player he once was following illness. It would be a wonderful story if he did.

Midfield has been an area that United have been slightly weak in for the last few years, and Ferguson needs to be criticised for not signing a world-class central midfielder at the peak of his powers. The likes of Wesley Sneijder, Bastian Schweinsteiger and Luka Modric have all been heavily linked with moves to Old Trafford, and all would’ve been absolutely perfect. It would appear that Ferguson has just not tried hard enough to get them when the chance has arisen.

Although United still lie third in the Premier League table after their opening six games, their performances haven’t merited it, with midfield battles again lost by United on numerous occasions.

Against Everton in the opening game, Marouane Fellaini bullied Carrick throughout, although he was playing at centre back that evening. Scholes and Cleverly, meanwhile, were out-battled by Phil Neville and Darren Gibson straight from the off.

Unconvincing 3-2 wins against Fulham and Southampton followed, with Scholes required to come off bench and change the game in the latter after Carrick and Cleverley struggled hugely against the newly-promoted side. A comfortable 4-0 victory at home Wigan was a good display, but it was an example of papering over the cracks somewhat.

The 2-1 win at Anfield that followed was a terrific result but a travesty of a scoreline. Again Scholes was introduced at half time with Liverpool down to 10 men, and only then did they start to get a stranglehold on the game. Prior to that Carrick and Giggs had been non-existent in their tussle with Joe Allen and Steven Gerrard in the centre of the park.

The defeat to Spurs was, therefore, a result that has been coming for a number of weeks, with United’s woes in midfield fully exposed.

With the likes of Robin Van Persie, Wayne Rooney, Antonio Valencia and Shinji Kagawa in attack United will still challenge for all the major honours this season, but whether they win any of them will be dependant on how their unbalanced, ageing midfield copes in the games that really matter. So far they are failing that test.