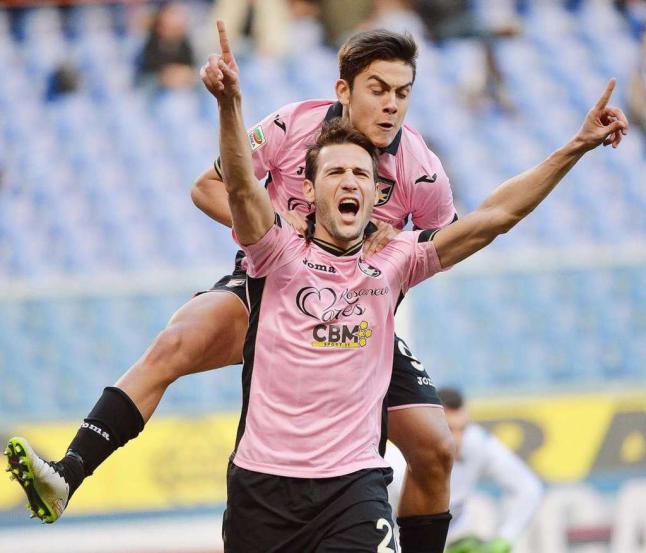 He’s dynamic, quick and boasts lightning pace. His touch is sound, the strikes on goal that come off of his boots crisp and stinging to the gloved hands of goalkeepers. Invention, creativity and a lethal end product define his game, a handful for opposing defenders and a perfect foil for team-mates. And no, his name isn’t Paulo Dybala.

Does the preceding description accurately depict the type of player Dybala is? Certainly. But it’s his partner in crime that also deserves to be the toast of the town, somewhat lost in the mix as Dybala’s name is splashed across the headlines on a daily basis.

Turn back the clock to August 2012. Franco Vazquez, the man brought in to replace the departed Javier Pastore at Palermo in January, was somewhat unceremoniously shipped out on loan to Rayo Vallecano.

The spell in Vallecas wouldn’t be a particularly happy one. Starts were few and far between for the Argentine. During his limited minutes, Vazquez was deployed almost exclusively out wide, largely ineffective. Only when Rayo had nothing to play for in the final three games of the season did he score two of his total three goals in Spain.

For Vazquez, it wasn’t how things were meant to go. When he arrived at the Renzo Barbera just after the calendar flipped over the 2012, the 22-year-old El Mudo was supposed to be the next South American sensation to grace Sicily. But he was stuck behind Josip llicic and Eran Zahavi in the pecking order, still too raw to have the desired impact.

The loan at Rayo Vallecano was Palermo’s attempt at solving the problem with regular minutes. As it transpired, the situation was less than ideal. Vazquez’s stock tumbled. When he returned to the Rosanero, he found a side in turmoil that had been relegated in his absence, and one that most definitely didn’t see him as a saviour. To incoming head coach Gennaro Gattuso, he was invisible.

Gattuso left Vazquez out of the squad entirely, effectively ruling the Argentine out for the entire opening half of the campaign due to Serie B regulations. The Italian was dismissed from the helm on a few games into the season, but his spectre lived on for the shelved Vazquez. Only in January could he at last be reinstated, a choice immediately made in the attacking midfielder’s favour by Beppe Iachini. 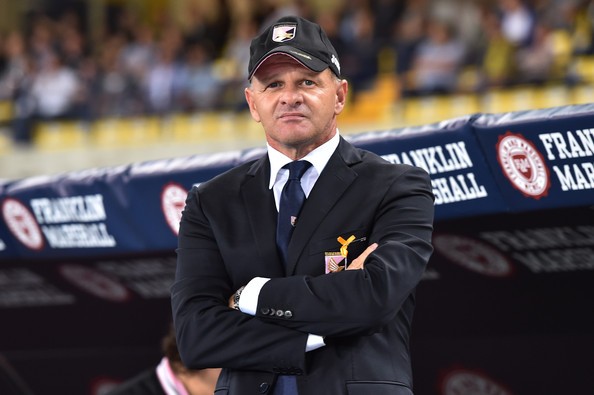 Given the chance, Vazquez finally flourished. It took him just five appearances to establish himself as a nailed-on starter. And it was around that time that a beautiful partnership would begin to sprout. Vazquez played in the hole behind his countryman Dybala for the first time on match day 28 in a 3-0 victory over Juve Stabia. Iachini would tinker with his attacking set-up on numerous occasions as the season moved towards its conclusion, but had already found a winning formula that would later rear its head. Palermo cruised to the title, winning immediate promotion back to Serie A. The stage was set.

As the limelight beamed down on the Rosanero this term, however, it was a certain Dybala that began soaking up the lion’s share of it. With Kyle Lafferty and Abel Hernandez gone, the centre forward role was solely his. An opening day goal in Serie A was the sign of further things to come, even as he wouldn’t score again until October. Then, Dybala exploded. Goals began to tumble from the sky like a driving rain for him, mesmerising pundits and scouts sent to have a look at him. But for nearly every moment of it, there was a seemingly underrated constant – it was Vazquez playing in behind him, forming the partnership that Iachini had stumbled upon in the second half of last season en route to the Serie B crown.

The papers in England have been awash with Dybala’s name, and the media blitz in relation to the Argentine has only intensified over the last week. Amid persistent links with the Premier League’s elite, Manchester United, Arsenal and Chelsea have emerged as the top suitors – according to the chatter in Italy. United reportedly sent scouts to closely watch Dybala of late, while Palermo owner Maurizio Zamparini openly revealed interest from the Blues earlier this week. And a breakdown in relations between Dybala and his former greatest advocate – Zamparini – only added fuel from the fire.

Zamparini has spit fire over Dybala’s refusal to sign a contract extension, leaving the 73-year-old with little choice but to sell in the summer, as his current terms expire in 2016. The Italian has held agents responsible for “corrupting” his young star, turning his head towards bigger things at only 21 years of age. With Zamparini reportedly in London to negotiate, it looks only a matter of time before an announcement arrives in the summer that Dybala is on his way out – to be celebrated by the supporters of an English giant. 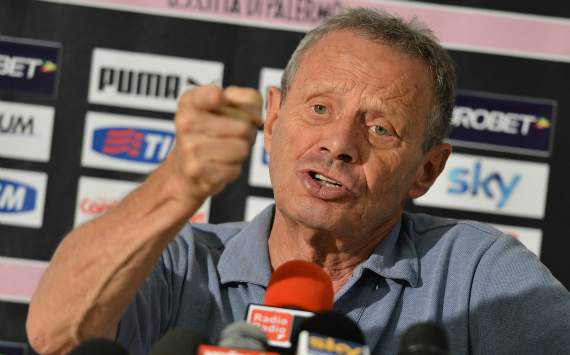 Dybala’s lack of willingness to commit to Palermo stands in stark contrast with a man he has an almost telepathic connection with – Vazquez. In January, the 25-year-old put pen to paper on a deal tying him to the Rosanero until 2019, accepting net wages believed to be in the region of €15,000-per-week. It could rather easily argued that he’s worth much more. Vazquez knows it.

In the contemporary era, contract extensions are often a matter of course. They guarantee value rather than loyalty. “Of course I am proud to be of interest to other clubs, but I am thinking of Palermo and the long contract that ties me to them. Then we’ll see,” Vazquez told a press conference after signing on for a further five years. It wasn’t exactly a ringing endorsement of the Rosanero project. Yet it’s still a different path to the one Dybala seems to be taking.

With seven goals and nine assists to his name, Vazquez is one of the top attacking performers in Serie A this term. He’s had a hand in only two less goals than Dybala to date, his fellow Argentine having hit the back of the net 11 times and set up a team-mate on a further seven. But four years Dybala’s senior and lacking a moniker the likes of ‘the new Sergio Aguero’ that his partner up front carries, the appeal isn’t quite the same. Dybala has the wind of publicity at his back, but owes some credit for his success to Vazquez.

It was the elder Argentine who outshone the younger at the weekend in a 3-1 victory over Napoli. Vazquez claimed the assist on Achraf Lazaar’s long-range opener, then hit the back of the net himself with a stunning strike set up by some lovely work from Dybala. The two combined to set up Luca Rigoni for the third goal that effectively killed off the game. Palermo’s counter attack was devastating, with Vazquez and Dybala at the heart of the Rosanero’s brilliance on the break.

“Palermo hit third gear with super Vazquez,” declared La Gazzetta dello Sport on Sunday. The pink paper declared him the man of the match, with a rating of eight. Just behind was Dybala with a 7.5. Corriere dello Sport saw fit to lead with the latter man. “Dybala show, super Sicilians win 3-1,” the daily’s front page said. Even in a near-perfect performance, Vazquez was relegated to the back seat by one of the national newspapers.

The fact is that Dybala has captured both the imagination of those in Italy – and abroad. Vazquez is a sensation within the peninsula, and endeared himself further in declaring recently that he’d accept a call-up with the national side – eligible to play for the Azzurri through his mother, a native of Padua. He just quite doesn’t have the reach that Dybala has, El Mudo playing second fiddle to La Joya, standing behind him in a figurative sense similar to the literal position he occupies on the pitch relative to his countryman. 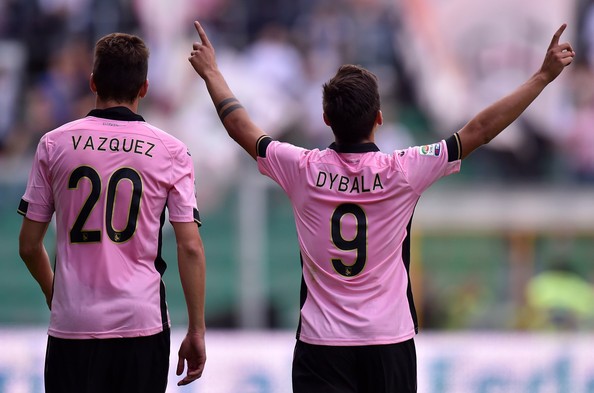 Once the end of the season hits, Dybala will almost certainly be moving on for a brighter spotlight, and with merit. He’s perhaps the most talented young forward on the market at the moment, and even without Vazquez supporting him should thrive wherever he goes, likely to link up with new team-mates standing among the most heralded in the world. But perhaps he owes a generous tip of his hat to Vazquez, an understated genius who has helped get the best out of a player who had also struggled to give his best in Europe until this season.

El Mudo – so called because he speaks little – has done his talking on the pitch, enabling the jewel he partners in attack to gleam with as much radiance as possible. Maybe only out of the shadow of Dybala will he get his full due. In all likelihood, we’ll only know once next season rolls around. At Palermo or elsewhere, Vazquez will have his shot to consolidate his burgeoning reputation. He and Dybala have something of a mutual debt of gratitude with a divorce on the horizon. And instead of sailing off into the sunset as Dybala embarks for Old Trafford, Stamford Bridge, or elsewhere, Vazquez can close the book on a major chapter of his career – and begin writing a new one in which, just maybe, he’ll be the main character.