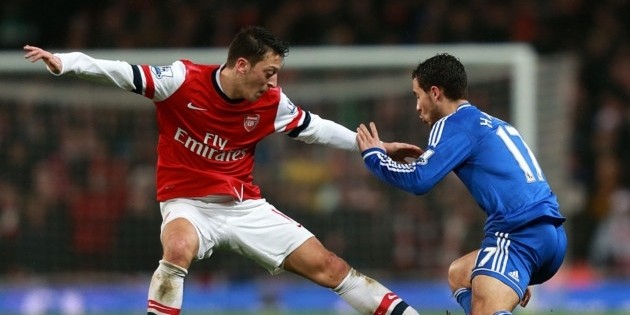 It certainly is the tightest Premier League title race for many a year, with Chelsea, Arsenal and Manchester City all battling relentlessly for the right to be crowned champions of England.

The trio have a wealth of talent at their disposal, encompassing every area of the pitch, but it is their respective attacking midfields that are charged with producing the ammunition necessary to fire them to the top.

Today, Soccerlens teams up with SportsMatrix to bring you a direct comparison between the three attacking midfielders who will arguably have the most to say in the title race: Mesut Ozil, Eden Hazard and David Silva. 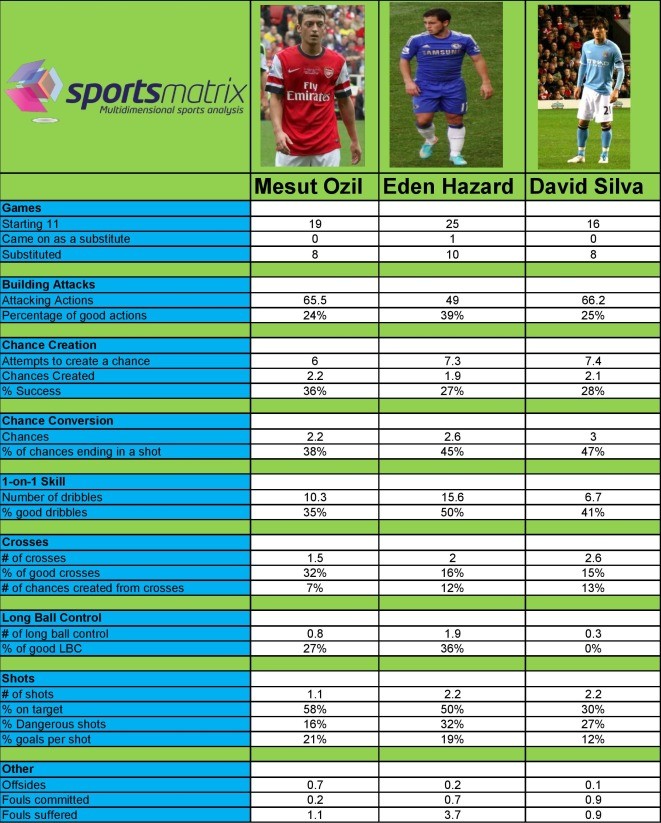 *Stats taken from before Gameweek 27

The three players all have different key attributes. Chelsea’s Hazard is the most direct, being deployed predominantly on the flanks; Ozil starts in the hole for Arsenal, yet is given a free role; and David Silva, who is also given the freedom to roam, flits between his starting position on the wing and the centre, yet with more energy than the Arsenal man.

The trio are their respective club’s creative hub, and they are consistently looked for to provide the cutting edge.

Mesut Ozil started the season very brightly for Arsenal, but has suffered from fatigue and poor form of late, and has been afforded an extended leave of absence.

Having bagged four goals and eight assists in the Premier League by mid-December, Arsenal’s record signing has struggled badly, and has only managed a solitary assist since.

The German, when on form, is known for his play-making, and relies much more on his passing compared to his Arsenal teammate Santi Cazorla.

As you can see from the above table, Ozil is afforded the least amount of chances to create, yet still has a superior success percentage when compared to Hazard and Silva. His goals per shot percentage also comes out on top, with the £42m man picking the right moment when to let fly.

Ozil’s crossing accuracy is by far the best of the three, despite attempting the least per game, yet hardly any result in a chance for Arsenal, arguably due to the lack of height throughout the side.

Eden Hazard, the only out-and-out winger of the trio, comfortably has the best dribbling record, with the Belgian not only embarking on the most, but also pulling off half of them successfully.

His 12 goals and eight assists so far in this Premier League season has helped propel Chelsea to the top of the division, and he looks in no mood to slow it down.

The 23-year-old has earned high praise for his slaloming running with and without the ball, and his abilities shine through in the stats.

His long-ball control is also the best here, with Jose Mourinho recently leaving both Hazard and Samuel Eto’o in advanced positions during opposition set-pieces. He has also suffered the most fouls due to the directness of his play.

David Silva, despite having played the least games out of the three, is seemingly the most active in chance creation during games.

Per game, he has the most attempts at creating chances, and puts in the most crosses, with the Spaniard’s energetic style of play aiding him in the free role he is afforded in the Man City side.

Manuel Pellegrini plays with two up top, and with that comes double the amount of targets for Silva to aim for than for Hazard or Ozil.

Silva also has the most chances himself per game, and has the highest percentage of shots per chance.

The former Valencia man has missed a large chunk of the season due to injury, but has created an assist every two games since returning to the fold.

His four goals and eight assists is nothing to sniff at, and judging by his impressive stats, he could play a key role in City’s charge for the title.

Who is the better player?