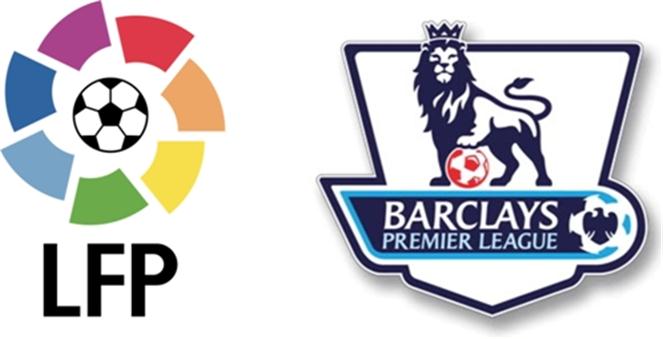 Although, in terms of grandeur, passion and magnitude, nothing come close to El Clasico – but apart from that, other fixtures do not hold that same amount of importance. Of course, the landscape is changing again after Atletico Madrid finally broke the duopoly in Spain last season.

In the last decade, we have only three winners in England – Manchester United, Chelsea and Manchester City – but the constant rise & fall of big clubs (United & Liverpool) is only reflective of the fair amount of competition the league boast of. Southampton, who only four seasons ago were plying their trade in lower divisions, are second in the league table at the moment. And the lion share of credit for providing this competitive edge throughout the league, goes to the league’s excellent system of TV revenue distribution.

Here the revenue are shared among all the 20 clubs in equal proportion, as per league standing. Therefore Cardiff, who got relegated last season, earned only £1.5m times less than league winner Manchester City, but that ratio is still the smallest in any of Europe’s top leagues. 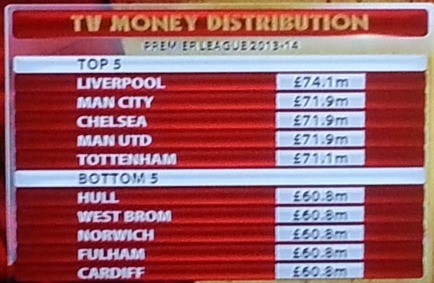 On the other hand, in La Liga, top clubs like Barcelona and Real Madrid, negotiate personal TV deals with the sponsors, as a result of which there is a huge gap between the money earned by them & other clubs. It prevents other club from buying top players unlike the big-two, therefore dilute the competition and leaves a negative impact on the league. 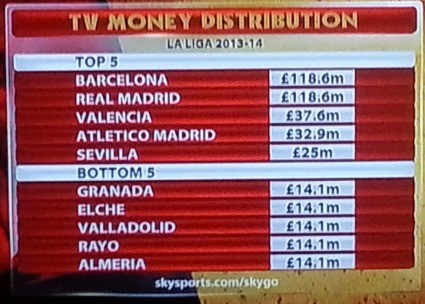 As you can see, Atletico Madrid, the Champions of La Liga last season earned only £32.9m, less than what Cardiff & Fulham (both relegated teams in Premier League) have earned last season, and almost one-third of the total revenue earned by the big two in Spain.

Real Madrid and Barcelona have earned at least £50m more than top clubs in the Premier League and nearly £100m more than the bottom clubs in Spain like Almeria or Rayo.

Apparently Spanish government are taking more serious steps with proposed statutes in the new Sports Law that could see the TV revenues of Barcelona and Real Madrid slashed, which would bring more parity in the system when it comes to TV deals for other clubs.