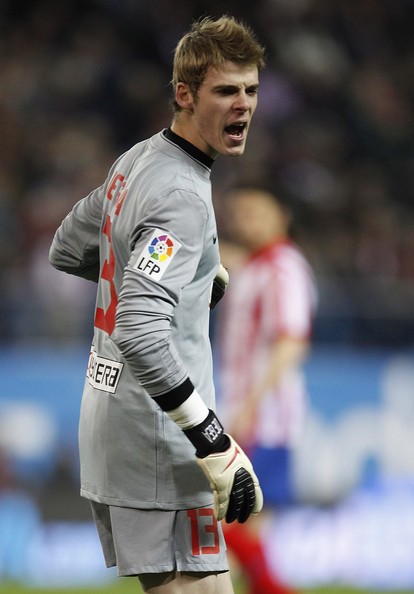 With the domestic leagues finished and only the Champions League final to play on Saturday, football fans across Europe are probably feeling a little blue this week. Work rumbles on, the newest Icelandic ash cloud threatens to disrupt our holidays and, most importantly, the new season won’t get underway until August!

But fear not! This could be one of the most exciting transfer windows for English clubs transfers in years, with clubs like Manchester United, Arsenal, Chelsea, Tottenham, Manchester City and Liverpool all looking to strengthen their squads considerably for the demands of an increasingly competitive domestic league. Here’s a look at some of the key transfers shaping up – make sure to add your own predictions in the comments!

The big three at this early stage of the summer are Atletico Madrid’s pair David De Gea and Sergio Aguero and Benfica’s left-back Fabio Coentrao.

Manchester United are painfully aware of criticism that, although they won their record 19th Premier League title, it was with what some sections of the media regard as their weakest squad in years. They have rightly prioritised the replacement of retiring goalkeeper Edwin Van Der Sar. While Sir Alex Ferguson had all but confirmed the £18 million signing of De Gea, reports yesterday from De Gea’s representatives have suggested that a deal is far from being done.

United have also been linked with a move for Raphael Varane with the deal expected to be decided one way or the other in the next couple of weeks, and the Red Devils are also in the market for a creative midfielder, with Ashley Young, Samir Nasri and Luka Modric all mentioned. My money is on a younger player, so Nasri might fit the bill unless Fergie pulls a coup and brings in someone like Eden Hazard.

The pressure is on Manchester City’s Roberto Mancini to challenge for the Premier League title next season, so big things can be expected of them.

Following Aguero’s statement that he wants to leave Atletico, the smart money is on him moving to the blue half of Manchester, possibly to replace Carlos Tevez, with Sheikh Mansour’s deep pockets capable of meeting the transfer fee and Aguero’s wage demands.

Potential rivals for his signature are Chelsea, with Roman Abramovich seemingly ready to splash the cash in a bid to sit atop the Premier League again; Real Madrid, who have been tipped as a likely destination by those close to the Argentine.

Barcelona and Juventus have also been linked although smart money is on one of these three clubs signing him this summer.

Fabio Coentrao, the highly-rated Portuguese, also seems set to seal a big-money move, though his destination is far more difficult to predict. Conflicting reports coming out of Portugal indicate Real Madrid and Liverpool as front-runners for his signature, with both clubs apparently having offers of around £25 million accepted. With Marcelo currently unshakeable in Real’s left-back position, however, the guarantee of first-team football at Liverpool may be the deciding factor.

Who’s the next Chelsea manager?

As well as players moving on, we will also see a couple of managerial vacancies filled. With Antonio Conte taking over at Juventus, there is now only really only one job up for grabs that will be a guaranteed talking point when it’s eventually filled and that’s…West Ham! Actually, it’s not. Sorry West Ham fans. It’s Chelsea, of course, and they do not seem to be short of options.

Guus Hiddink, who made a good impression with his FA Cup-winning six-month stint at Stamford Bridge in 2009 is the bookies’ favourite after admitting that he misses day-to-day club management in his international capacity with Turkey. Other names in the frame are Manuel Pellegrini, who continually crops up as a candidate for big teams needing a manager despite his never having won a major domestic or European trophy; Marco van Basten, same story and, in what would be THE story of the summer, Jose Mourinho, who could be tempted back to his former club after a reported bust-up with Cristiano Ronaldo.

And this is without mentioning Arsenal’s rebuilding efforts and Harry Redknapp’s challenge of injecting fresh blood into a Spurs side that looked increasingly jaded as the season drew to a close. What are your transfer tips this summer? I, for one, can’t wait to see what happens.