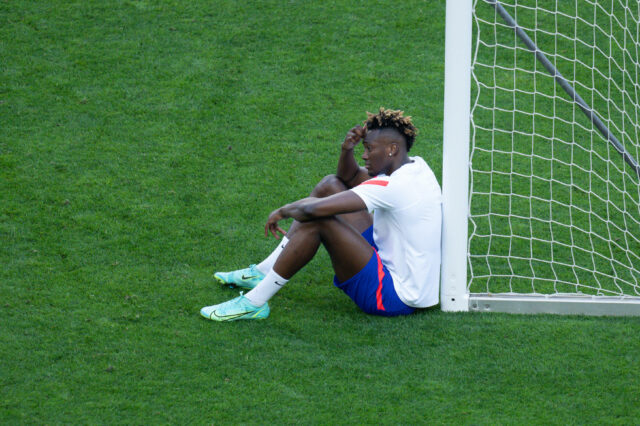 It is an open secret that Arsenal need a striker this summer.

Mikel Arteta is looking to rebuild the squad and is aiming to bring in several players this summer.

Alexandre Lacazette and Pierre-Emerick Aubameyang are now 30 and 32 respectively, while Eddie Nketiah has frequently been linked with a move away from the club.

With that in mind, Arsenal’s move for Chelsea striker Tammy Abraham makes sense.

Arsenal have a history of signing players from Chelsea, with Petr Cech, David Luiz and Willian recently switching clubs.

Chelsea are keen to offload Abraham. He regularly featured under Frank Lampard but struggled for game time when Thomas Tuchel took over.

The Blues value the 23-year-old at around £40 million, and Arsenal, Tottenham and West Ham United are vying for his signature.

Both Spurs and West Ham desperately need to sign a new striker this summer, but it seems the Gunners are leading the race for Abraham.

Arsenal are ready to submit a loan bid for Abraham with an option to make the move permanent at the end of the season.

Abraham is a good finisher who showed his class for Aston Villa during his loan spell. If proper service is provided, he can be a lethal weapon.

However, in terms of creating opportunities, which modern strikers are expected to do, Abraham falls short of expectations.

Arsenal have an abundance of creative playmakers, but they need a striker who can finish those chances.

Abraham, who has racked up 30 goals and 12 assists in 82 games for Chelsea, could solve Arsenal’s goalscoring problems.

Read: Danny Ings would be a superb signing for Tottenham.