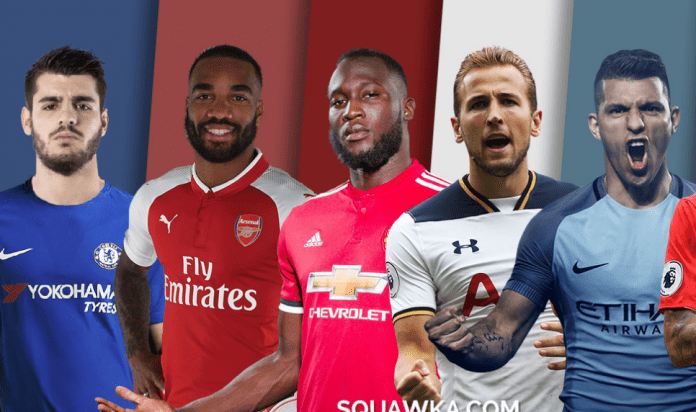 The race for the Golden Boot in the Premier League next season is going to be very enticing indeed. In the running are some old faces and some new. Arsenal and Chelsea have spent big on marksmen overseas, while Manchester United have splashed the cash on a tried and tested goalscorer in England.

All in all, the route to be crowned top scorer is going to be fiercely contested. We take a look at 5 strikers who are almost surely going to be in the thick of. The performances of these players could lead to not only individual accolades, but also help their teams challenge for the title.

It would be foolish to start with anyone other than Harry Kane, the winner of the Golden Boot in each of the past two campaigns. The Englishman scored 7 goals in the last two games of last season to end the campaign with 29 Premier League goals. He bettered his tally of 25 from the previous season, and it wouldn’t be surprising if he touches the 30-mark this year.

A lethal and clinical finisher, Kane suits Spurs’ open, attacking style of football perfectly. It is no wonder that he get so many chances in front of goal, most of which he takes. At just 24, he has 78 Premier League goals in total. He is undoubtedly the most legitimate threat to Alan Shearer’s record of 260, which at the moment looks unassailable for any striker.

Kane is surely one of the heaviest favourites to win the Golden Boot again this season to make it a fantastic treble. He has shown no signs of slowing down and is only starting to hit his prime. If he can stay fit for the majority of the season, he’s going to take some stopping.

Romelu Lukaku didn’t know what hit him last year, when Kane’s blitzkrieg in the last two gameweeks pushed the then-Everton man into second place. Now at Manchester United following a transfer worth £75 million, the Belgian will hope to go one better. He is replacing Zlatan Ibrahimovic as the number 1 striker at Old Trafford, and will therefore get a lot of opportunities to score.

United struggled to find a way past teams in the bottom half last season, while Lukaku was ruthlessly efficient against such sides. It does seem like a match made in heaven. The former Chelsea man scored 25 league goals last season, marking the first time he surpassed the 20-goal mark in the competition. Like Kane, his best years are still ahead of him. If United are to challenge for the title, he will have to shine.

An ever-present among the candidates over the last few seasons, it is remarkable that Sergio Aguero has won the Golden Boot award only once. The Argentine has been the most prolific goalscorer in English football over the past 6 seasons, netting 20 or more in 4 of them. This is despite his fair share of injury problems.

Now 29, Aguero hasn’t shown too many signs of slowing down. Man City are expected to be right among the mix next season, and their star striker will play a huge role. He will, of course, share the goalscoring responsibilities with Gabriel Jesus, the young Brazilian who Pep Guardiola is big on.

The major expectations though, will still be from Aguero. If he can stay fit for 30 games or more, it is almost a given that he will score at least 20-25 goals. That will be a huge fillip to City’s title bid, and also his individual quest to be the top goalscorer.

Arsenal’s club record signing from France has a phenomenal record. In the past 3 seasons, Alexandre Lacazette scored a whopping 77 goals in Ligue 1 with Lyon. Despite the French league not being as competitive as the one in England, that is a pretty incredible return.

He also looks like a perfect fit at the Emirates Stadium. Arsenal have been missing an out-and-out goalscorer since Robin van Persie’s departure in 2012, and with service from the likes of Mesut Ozil and Alexis Sanchez (if he stays), Lacazette could thrive. At 26, he is also in the prime of his career. The Gunners could have a legitimate chance of challenging for the title if the former Lyon man can play a starring role up front, with Sanchez and Ozil offering a support cast nothing short of world-class.

A real dark horse in the Golden Boot race, Alvaro Morata became Chelsea’s club record signing when he joined from Real Madrid last week. The Spaniard played a minimal role off the bench during his stints at both Juventus and Madrid. At Stamford Bridge, he will be replacing Diego Costa as the main man up front. Costa didn’t win the Golden Boot during his time at Chelsea, but netted 20 or more in both the 2014/15 and 2016/17 seasons, when the Blues won the league.

Morata has shown a knack of scoring important goals in the past. His 15 goals in 26 appearances (mostly off the bench) at the Santiago Bernabeu last year won Real Madrid 13 points. At Chelsea, his job is going to involve a lot more responsibility.