Thomas Vermaelen needs to step up 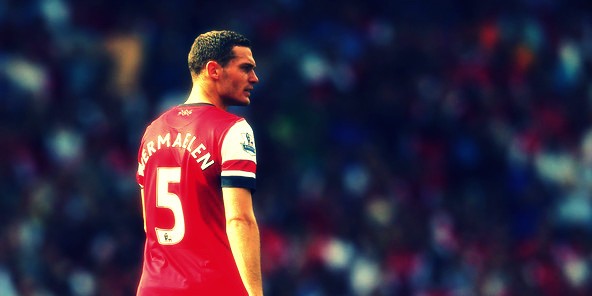 Arsenal have made their worst start in a season since Arsene Wenger took over at the club and there are various reasons for such an ablation.

The fans have already voiced their concerns against the board and the way the club is being run, while pundits have blamed Arsene Wenger. But at the end of the day, the players must also shoulder the blame equally; perhaps even more.

The club might be affected by the management, but as the players cross the white line wearing the Arsenal shirt, they must give it their all on the field; that is the minimum the fans expect from the players. But sadly off-late even the desire has been missing at times.

The team has looked disjointed and disorganized. It has lacked the drive and will to succeed, but mostly it has looked leaderless. At such troubled times, players often look up to their skipper. The man wearing the arm band needs to provide the push; he needs to motivate and unify the squad for a common cause. That one motivator has been missing from the team.

Since Patrick Viera’s departure from the club, Arsenal have failed to find a captain who could lead like the Frenchman used to, back in the glory days. When Thomas Vermaelen was selected as the man who would wear the coveted arm band, it installed hope among the fans that the Belgium defender can rally his troops to glory.

But this season, Vermaelen has been disappointing; both as a skipper and as a player. He hasn’t lived up to his high standards and expectations. The captain must lead from the front and Vermaelen has failed to do so.

The Belgium international has been in poor form this season. In fact questions must be raised whether he finds himself in the team regularly only because he wears the armband. Arsene Wenger surely couldn’t have dropped his captain for poor performances; it could have caused a rift within the team.

Per Mertesacker has been Arsenal’s most consistent defender this season, which meant Koscielny, who was their most impressive defender last season, had to miss out a lot of matches.

In fact in order to accommodate Vermaelen in the team along with Koscielny and Mertesacker, Wenger has played the Belgium international as a left-back at times (even when Gibbs was available for selection).

This further weakened the team as Vermaelen is not a natural full-back. Gibbs who has performed admirably well this season had to miss out due to this. Koscielny’s recent injury has provided the opportunity for Vermaelen to move back into the center back role with Gibbs being deployed as the left back. But when the Frenchman returns to full fitness, will Wenger bite the bullet and drop his skipper if his poor form continues?

One particular weakness of Vermaelen has been highlighted this season – he has been caught out of position far too often. While it looks exciting when Vermaelen goes on his marauding forward runs and joins the attack, it often leaves a gaping hole at the back for the opponents to exploit on the counter attack.

The Belgium international must learn to control his adventurous streak. Captainship brings with itself a lot of responsibilities and bounding. His primary role in the side is to defend and that is what he must concentrate on.

If Arsenal ever needed a leader to step to the plate, it is now. While his poor form might have affected his leadership in the team, he must find a way to motivate and organize his team mates on the pitch. It is time to lead from the front.