Football really is a fickle mistress isn’t it? Just when you think that the game has thrown up just about every conceivable high, every unimaginable low, and plenty in-between, it goes and pulls a fresh rabbit from the hat and leaves you wondering: a) why the hell you bother with the thing, and b) when the next game is!

Liverpool-Arsenal affairs have always had a little special tinge to them, a little bit of magic. The Cup Finals of 1950, 1971 & 2001 provided their own drama, late goals, remarkable comebacks and controversial incidents, the Champions League clashes last season were an advert for pragmatism & solidity versus fluidity & idealism, whilst recent league fixtures between the sides have invariably brought with them goals and drama. Especially at Anfield.

But nothing quite like this. This evening, in front of a crowd which seemed to dictate the pattern of the game in a manner which I must confess I have never seen, the two sides served up an absolute classic.

When the crowd feared the worst, the Liverpool players lifted the tempo. When the crowd got complacent, Arsenal produced the sucker punch, and when the Kop collapsed in a sort of post-coitus fit of despair at Andrey Arshavin’s fourth (yes, fourth) strike of the evening, the players responded with one last leveller to ensure that Liverpool’s title bid is in intensive care, rather than the funeral parlour.

Liverpool needed three points from this fixture, make no mistake about it. Playing 24 hours before Manchester United & Chelsea, this was the chance to heap a little bit more pressure on their rivals ahead of what should turn out to be (reasonably) comfortable wins tomorrow- Everton’s recent record against Chelsea means I am comfortable saying this without fear of being pelted with Toffees.

Arsenal have come full circle this season, the autumn pessimism which brought boos for Ebouè, Bendtner & even Wenger had subsided, and spring had brought new optimism about an ever-maturing crop of youngsters playing typically Arsenal football.

Yet they arrived at Anfield off the back of a chastening defeat to Chelsea in the FA Cup semi final at the weekend, and without their two premier strikers in Emmanuel Adebayor & Robin Van Persie, as well as three of their first choice back five- Manuel Almunia, William Gallas & Gael Clichy. Subsequently Rafa Benitez could rightly have expected his side to continue their Premiership winning streak here.

As it happens, they couldn’t. The 4-4 draw- how many times has a side drawn two successive games 4-4 in recent times?- leaves Benitez’s side top of the Premier League table on goal difference, but with Manchester United armed with two games in hand, it is undeniably two dropped points that could ultimately spell the end of Liverpool’s first sustained title assault in twelve years.

And like Jose Mourinho’s departure from Chelsea, and most of James Bond’s headaches, there was a Russian to blame. 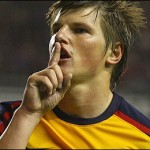 Arshavin has a lot of fans in English football. Like myself, plenty of supporters found themselves spellbound by the Russian’s poise, balance, dribbling and creativity both for Zenit St. Petersburg in their successful UEFA Cup campaign last season, and for his country in Euro 2008. His January arrival at Arsenal was hailed as a good move for English football, how nice to have such a player in our league. Well now he can add supporters of Manchester United & Chelsea to his adoring public.

Four times tonight the 27 year-old was afforded a shot at Pepe Reina’s goal. Four times tonight he hit the target. Four times he found the net. The Kop had chuckled midway through the first half as a rare technical glitch saw him spoon an attempted cross embarrassingly out of play, but they weren’t laughing by the time half time had arrived, Arshavin crashing in the opening goal via the underside of the bar after Samir Nasri & Cesc Fabregas had taken advantage of some sloppy play in his own box by Javier Mascherano. Arshavin held his finger to his lips, and he had three more bullets up his sleeve with which to silence Anfield.

Liverpool thought they had gripped the contest tightly with a post-interval surge which simply blew away Arsene Wenger’s men. For twenty minutes after the break, it was the Liverpool supporters yelling “hoof” as Arsenal’s panic-stricken defenders launched the ball aimlessly forwards in a vain effort to stem the Red tide that looked like sweeping the ball into the net with every foray forwards. Twice, the hoofs were not sufficiently hoofed, and led to goals. Dirk Kuyt provided both, landing crosses on the head of first Fernando Torres, and then Yossi Benayoun, both of whom beat Lukasz Fabianski with varying levels of panache.

With Mikael Silvestre, Kolo Toure & Kieran Gibbs looking like rabbits in the headlights every time the ball threatened to enter their penalty area, it seemed that more goals would follow.

They did, but both of them fell to Arshavin. Both owed much to errors from Liverpool’s much-improved full backs. First Alvaro Arbeloa committed the cardinal sin of waiting for a ball to reach him, allowing Arshavin to nip in like a Tesco queue-jumper and arrow a sublime right foot strike past Reina from 25 yards, then Aurelio decided the best way to deal with Nasri’s left wing centre was to cushion the ball neatly down towards the penalty spot, where the Russian lay in wait to complete his hat-trick with a skimming right foot strike. This time he did not need to put his fingers to his lips.

Still Liverpool came back, within minutes Albert Riera’s cross had found Torres, and the Spaniard had shifted the ball past Silvestre and smacked it low past Fabianski to re-ignite the Kop’s fire, but after Gibbs had denied the Spaniard his own hat-trick, Benitez’s side fell into Wenger’s trap by chasing the winner late on. Wenger had sent on Theo Walcott by this point, and when Aurelio’s corner was cleared to him thirty yards from his own goal, memories flashed back to THAT run in the Champions League last season.

Away he went, Xabi Alonso backed off, terrified of the pace, trying to buy time. But Walcott had an ally, arriving at breakneck speed on his left. The pass was precise, the first touch was assured, and the finish was ruthless. Julio Baptista scored four times for Arsenal at Anfield a little over two years ago, now Arshavin had written his own name into the history books. The final, decisive blow.

Only it wasn’t. Five minutes of stoppage time was indicated by the fourth official, and within three of them Liverpool had pulled yet another leveller out of the fire- Mascherano heading Alonso’s cross back into the six yard box, and Benayoun seizing on the loose ball to steer in his second. It says a lot about the craziness of the evening that the first thing I heard in the aftermath were the words “get the ball, we’ll win this”.

We didn’t of course, even this Liverpool side found securing a fifth goal in two stoppage time minutes beyond their capabilities, but for the second week running Liverpool fans can take not only great pleasure in watching their side involved in a truly incredible game of football, but also enormous pride and heart at the indomitable spirit shown by Benitez’s much-derided troops.

No doubt the critics will point to the fact that eight goals have been shipped in seven days by a usually watertight defensive unit, and the realists will surmise that a potential six point gap to Manchester United is unlikely to be overcome by the season’s end, but at this point it seems fitting to simply revel in the drama and beauty of yet another phenomenal spectacle involving Liverpool.

We’ve been here before, haven’t we? Ok so maybe the denouement was not quite so final, nor as last-kick-of-the-last-game-of-the-season dramatic, but for 1989, now read 2009, and for Michael Thomas, now read Andrey Arshavin.

Liverpool v Arsenal – All the goals